If there’s been an Achilles heel of the Surface lineup, it has been Microsoft sticking to low quality wireless adapters. Surface devices have almost exclusively utilized Marvel AVASTAR wireless, which has been not only slow, but unreliable. Over the years, the reliability has improved, but the overall solution was never up to where an Intel wireless adapter would perform in terms of both performance and reliability. The only time the Surface team has leveraged something other than Marvell was with their LTE devices, which would use a Qualcomm wireless adapter. Unfortunately, it wasn’t really any better than the Marvell one.

Luckily that has changed for the current generation of Surface devices. For the Intel-based devices, Microsoft has adopted Ice Lake's semi-integrated Wi-Fi 6 (802.11ax) solution. Unfortunately AMD doesn't offer an equivalent here, so Microsoft is using a Qualcomm wireless adapter in the AMD-based 15-inch Surface Laptop 3. 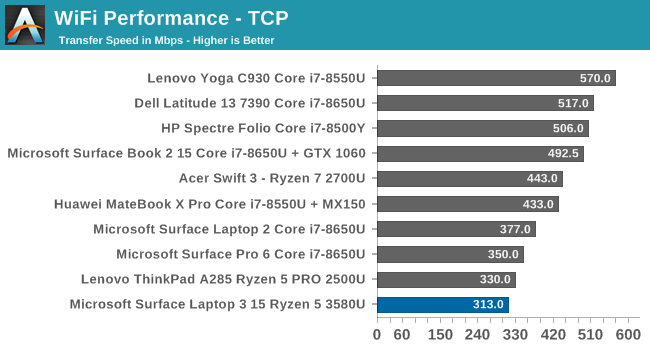 The results are not great. While there haven’t been any reliability issues at all, the performance of the Qualcomm wireless was frankly terrible. It is almost 2020, and we have wireless networking solutions that can reach over 1 Gbps with just a 2x2 configuration, but the 15-inch Surface Laptop 3 achieved a meager 313 Mbps.

Microsoft has outfitted the Surface Laptop 3 with Omnisonic speakers featuring Dolby Audio Premium, and while the pairing does not get excessively loud, the sound quality is fantastic, with much better low-end than you’d get on most laptops of this size.

At around 76 dB(A) measured one inch over the trackpad, there’s enough volume for most situations, and the improved sound quality is a great trade-off over really high dB speakers with no range.

There are two far-field microphones as well, enabling Cortana interactions if desired.

The advantage of a larger laptop like the 15-inch Surface Laptop 3 is that it should not have much of an issue cooling a 15-Watt TDP, and the laptop was stress tested to find out if that was the case.

Interestingly the CPU on its own only pulls 9-10 Watts under sustained load, with a brief peak of a hair over 15 Watts. This is well under a typical Intel 15-Watt CPU which can pull well over 30 Watts for burst and sustained power draws can be over 15 Watts if the cooling system can handle it. Despite the lower than expected power draw under load the CPU is still able to maintain 3 Ghz or higher.

The cooling solution is very solid, and unless you are really working the laptop it stays silent for most of the time. Meanwhile if you do need to use everything the laptop has, the fan only gets up to 46 dB(A) measured one inch over the trackpad, which is not very loud. The tone of the air movement is a bit harsh though, but never gets to be a problem.

As is typical of a Surface device it comes with very minimal software. There is the normal Windows apps, some of the Windows crap-ware that all machines ship with, and the Surface App, which lets you adjust the pen pressure, see the battery of connected Bluetooth devices, such as the pen, and get support if needed. 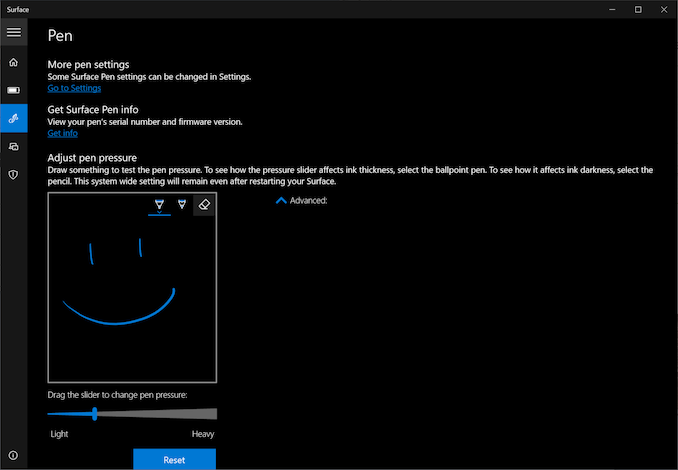 One thing that is absent though is the AMD Software Center, so you can’t adjust any of the typical AMD settings. Trying to download this from the AMD website will result in a “no valid hardware found” message. This is unfortunate, since you won’t be able to easily disable things like AMD’s Vari-Bright, which automatically lowers the screen brightness on battery. AMD let us know that they won’t be bringing this to the Surface Laptop 3 either, so if you are a fan of the AMD Software Center, don’t expect it anytime soon on this AMD powered device.