Microsoft outfits all of the Surface Laptop 3 models with just a 46 Wh battery, which is actually slightly smaller than the one in the Surface Laptop 2, and all despite this 15-inch model being physically larger. Microsoft has also changed their battery testing methodology from a basic local video playback time, to a more realistic workload, so if you’re looking at the Microsoft spec pages, expect to see a lower runtime advertised as well.

The original Ryzen 2000 Raven Ridge platform had some serious power management issues, and this will be our first test of any Picasso based laptops, since AMD hasn’t had a lot of big design wins previous to this one for their second generation Ryzen APU. 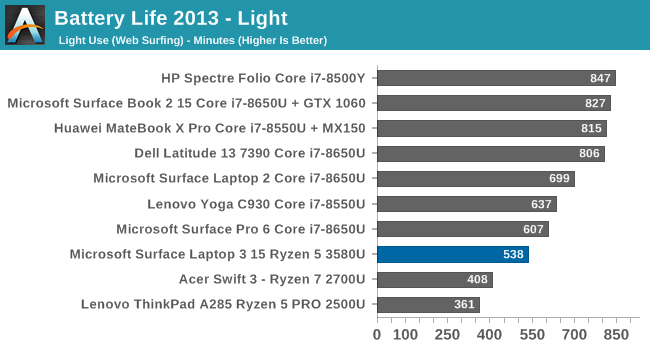 The 15-inch Surface Laptop 3 achieves just a touch under nine hours of runtime in our least-intensive battery test, with the display set to our standard of 200 nits brightness. While nine hours is a reasonable amount of time, it’s still well under the results from the smaller 13.5-inch Surface Laptop 2 we tested, which achieved almost 12 hours. That is a significant difference, of which some could likely be accounted by the larger display, which would inherently require more power to get to 200 nits, but it’s too big of a discrepancy to rest only on the display. 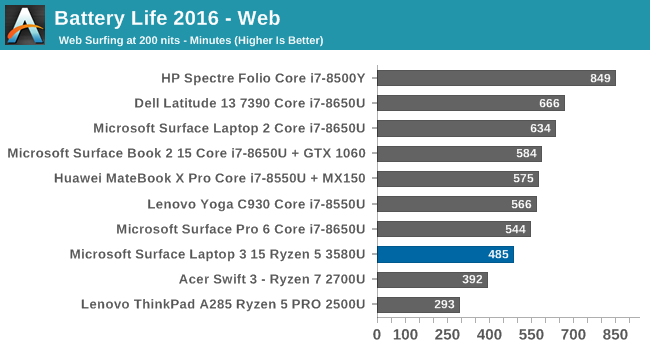 Our newer web test is much more CPU intensive, and a more realistic result than the older, lighter test. As expected, the results dropped further, to just over eight hours of usage, which is still a reasonable amount of time, but well under the 10.5 hours achieved by the Surface Laptop 2. 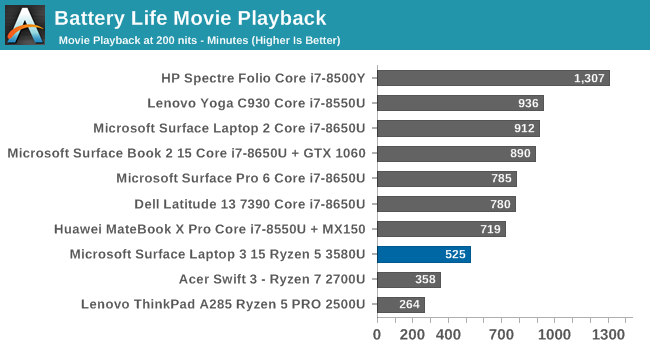 Video playback is one of Intel’s strengths, but it continues to be one of AMD’s weaknesses, with video playback time far shorter than the Intel offerings. Intel has put a lot of effort into offloading the video playback to fixed function hardware and turning the rest of the chip off, and while AMD certainly has hardware decode on their APU, it clearly can’t turn off the rest of the chip during playback, since the battery run time is somewhat less than our light web test. 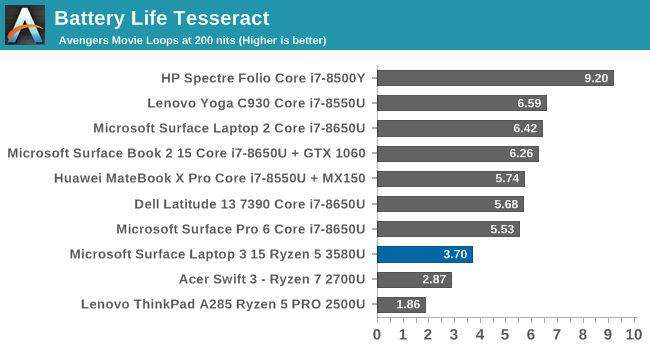 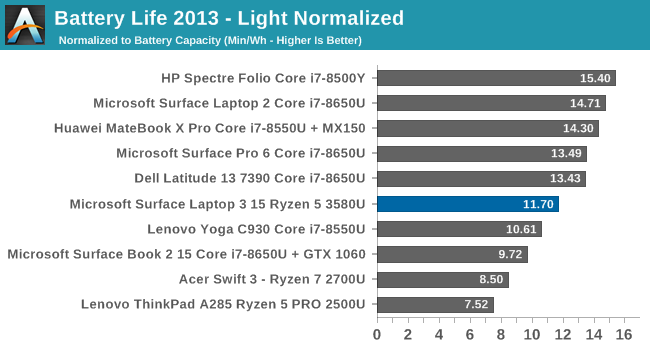 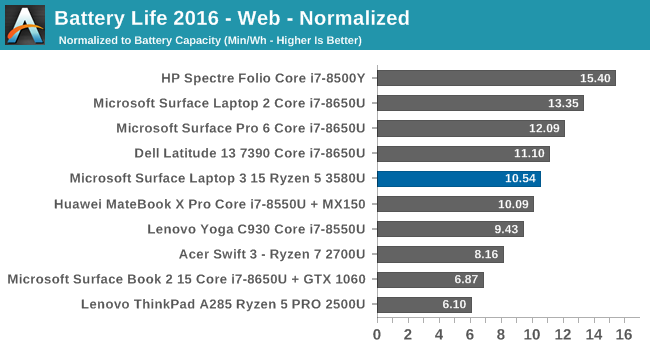 Removing the battery size from the runtimes lets us look at overall platform efficiency during the tests, and removes the insane runtime the Surface Book 2 provides thanks to its massive battery. Here the results are mixed. AMD has certainly made some tremendous strides in improving the abysmal platform power of the Ryzen APU from the original Raven Ridge to the current Picasso platform, with a much better showing in both the light test and 2016 Web results. Some of the discrepancy would come down to the display as well, since the larger 15-inch IGZO panel will need more power to light up to 200 nits than an equivalent 13.5-inch that we see in the Surface Laptop 2, but AMD definitely has more work to do in order to bring Ryzen's platform power down to what Intel has achieved.

The Acer Swift 3, which was the first Raven Ridge laptop we tested, drew 5.71 watts of power at idle with the display at 200 nits. That actually compares favorable with a Surface Book 2 15, which draws about the same – 5.53 Watts at idle with the display at 200 nits, but the main difference is the Surface Book 2’s display is the majority of the power draw thanks to its high resolution and 15-inch size. Removing display power from the devices results in the Acer Swift 3 drawing 4.55 watts at idle, and the Surface Book 2 drawing just 1.43 watts. The HP Spectre Folio, which features a Core i7 Y series processor, draws just 750 mW of power at idle.

To make up for the less than amazing battery life of the Surface Laptop 3, Microsoft does include a stout 65-Watt charger which connects to the Surface Connect Port. All Surface power bricks also include an integrated USB-A output which is very handy when traveling if you need to charge your phone, although they may need to add USB-C soon. 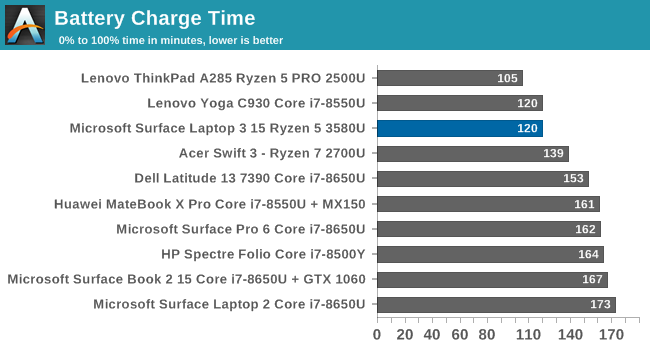 The Surface Laptop 3 charged very quickly. The smaller than average battery sized coupled with a larger than average adapter gave Microsoft lots of capacity to quickly get the Laptop 3 back up to a full charge.