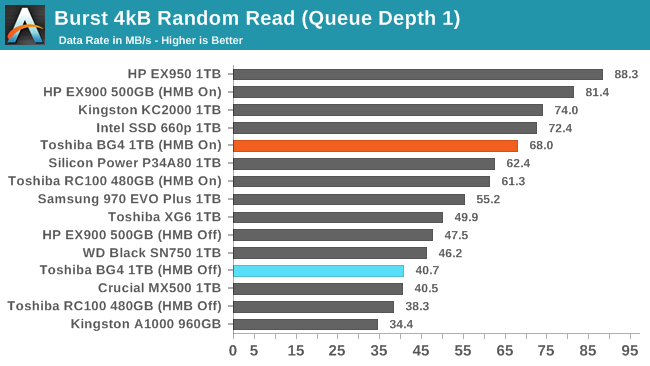 The Host Memory Buffer feature allows the Toshiba BG4 to offer burst random read performance that is competitive with high-end NVMe SSDs. Without HMB, it's about 40% slower, which brings it down to the level of the Crucial MX500 SATA SSD. 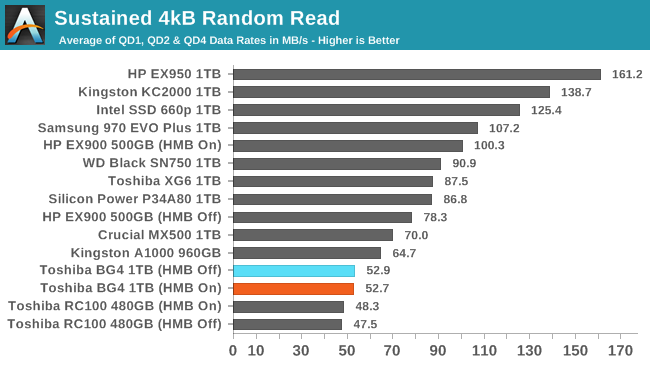 On the longer random read test, HMB has minimal impact because this test is working with more data than the HMB cache can help with. The BG4 is a step up from the BG3-based RC100, but otherwise it's slower than other low-end NVMe drives, including the HP EX900 (which does still benefit appreciably from HMB).

The BG4 matches the RC100's low power consumption and thus earns a better efficiency score, but it's still a relatively poor result due to the low performance. The HP EX900 requires more power overall than the Toshiba drives, but with HMB it performs well enough to beat the high-end drives on efficiency.

Since the HMB used by the BG4 isn't quite big enough to properly accelerate performance on this test, the BG4's performance does not scale well with increasing queue depth. It's still an improvement over the RC100, but all the NVMe SSDs with a full-sized DRAM cache are clearly much faster at high queue depths. 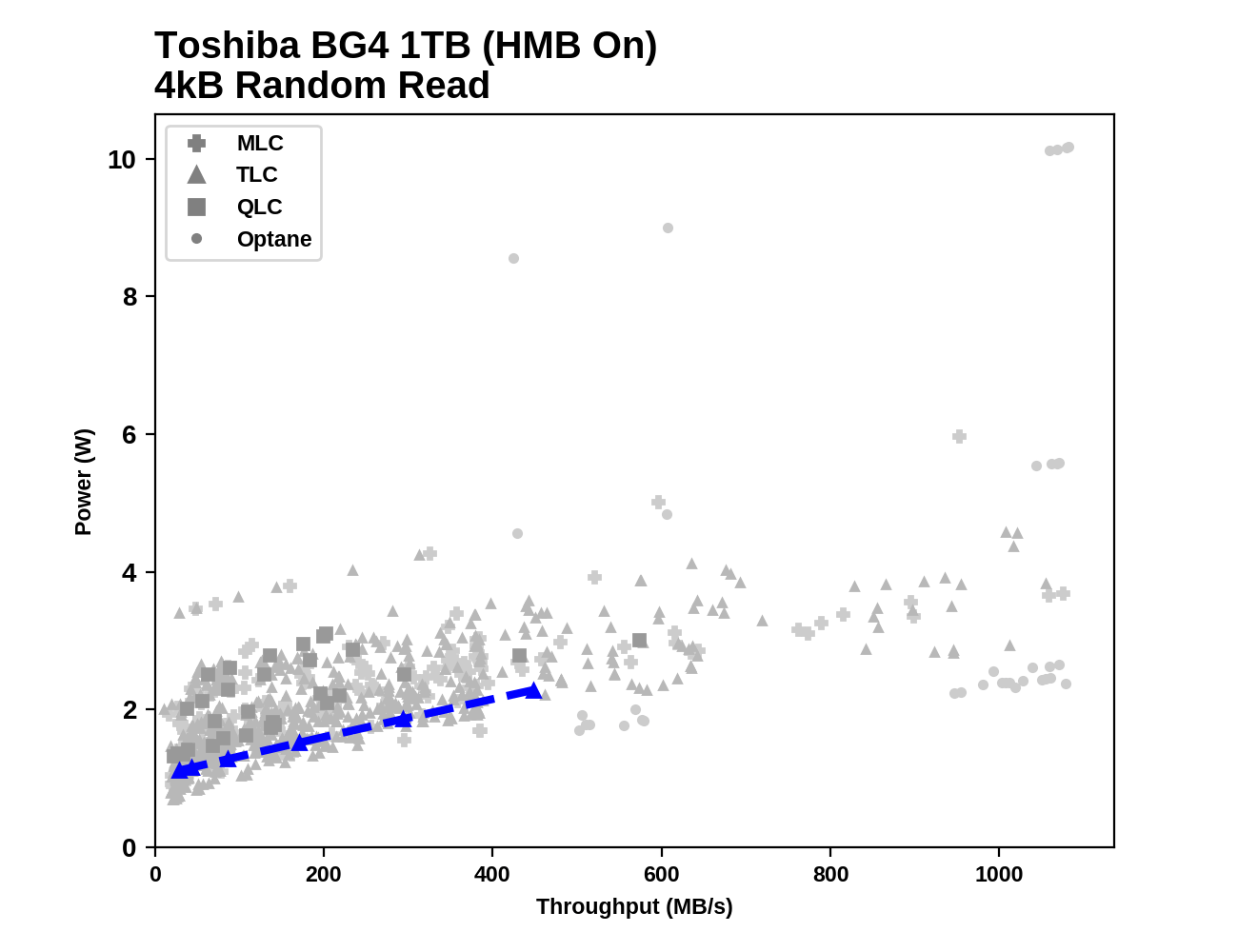 Except at the highest queue depths, the random read performance of the BG4 stays within SATA territory, with good but not record-breaking efficiency. 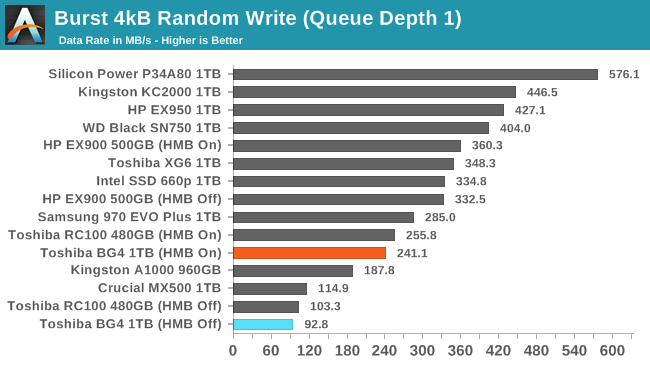 As with the burst random read test, HMB helps tremendously on the burst random write. Unfortunately, the BG4 is slightly slower than the 480GB RC100 with or without HMB, but at least with HMB it still offers a big performance boost over SATA. 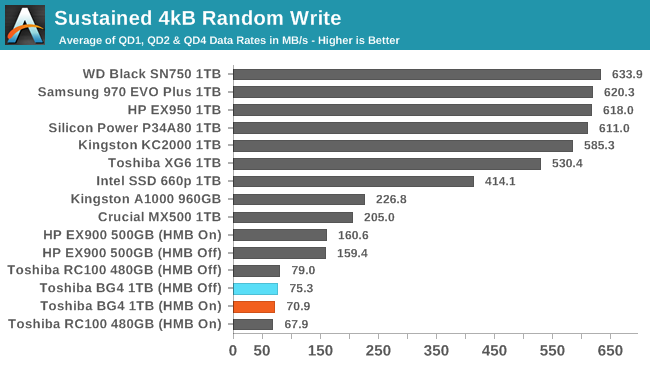 The longer random write test also covers a wider span of the drive, which defeats the performance benefits HMB would otherwise offer and leaves the BG4 just as slow as the RC100. The HP EX900 manages to provide twice the performance despite also being DRAMless, but even that is still slower than the mainstream SATA SSD.

The BG4 has the lowest power consumption on the random write test, slightly better than even the RC100. But the performance is poor enough that the efficiency scores are still among the worse for this batch of drives.

Since the bottleneck for the BG4 on this test is the mapping data access rather than the writing of user data, performance is basically flat across all tested queue depths save for slightly higher performance at QD1. 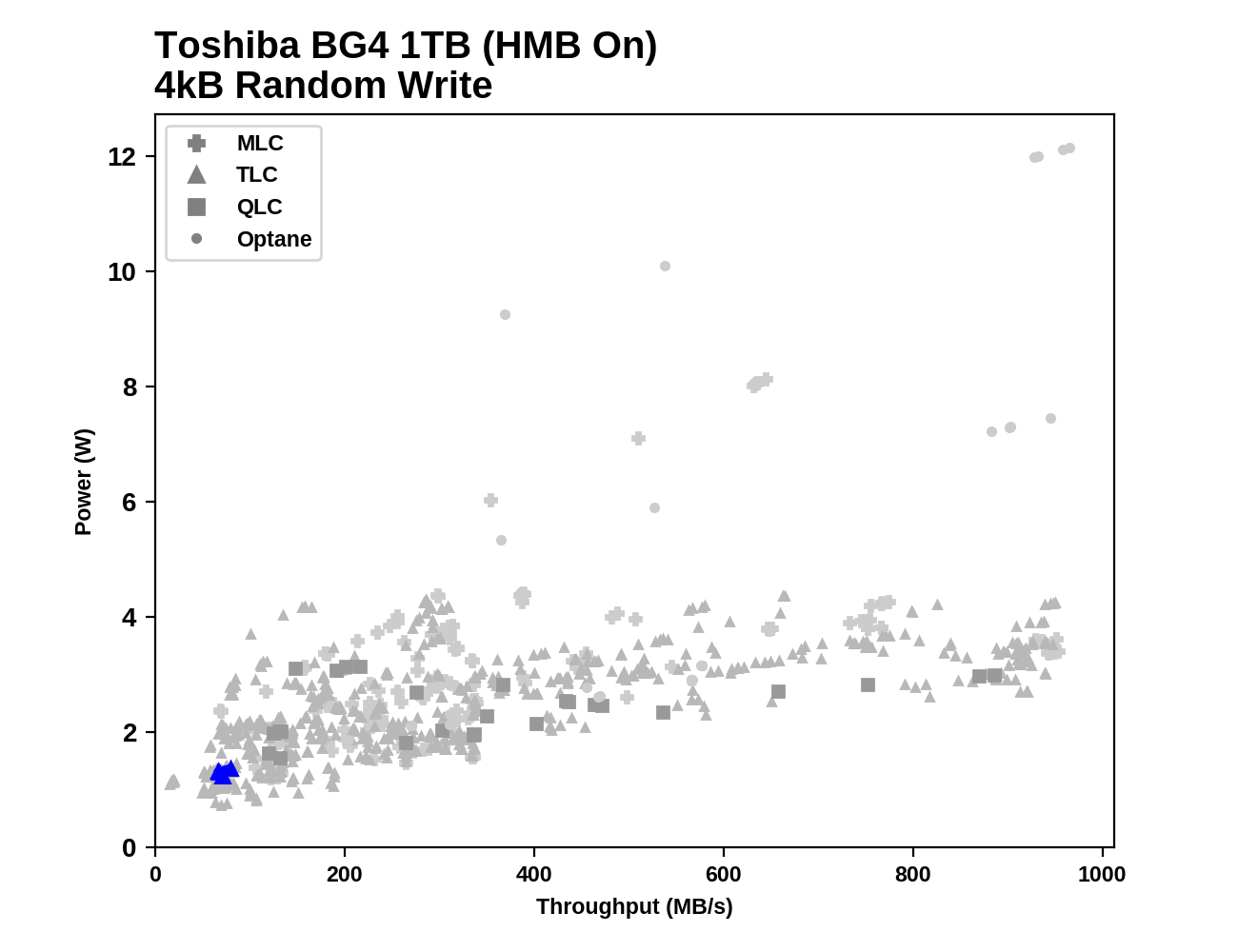 Plotted against all the drives that we have put through this test, the BG4 is stuck down in the low-performance/low-power corner where it isn't setting any records for better or worse.