We covered the CPUs of the A13 in detail, but there’s also the GPU we have to consider. Apple’s performance improvement claims for this year have been a little more conservative, with the company promising a 20% performance increase or a 40% decrease in power at the same performance as the A12. Last year’s jump was a rather large one, and we don’t expect Apple (or any vendor for that matter) to repeat it any time soon, especially as we saw both major microarchitectural changes as well as the adoption of the new 7nm manufacturing node at the same time.

Beyond the raw performance of the chipset and the GPU, what’s important for gaming is the actual device’s thermal characteristics and how it’s able to dissipate and sustain the high heat generation of the SoC. For the A12 I did criticize Apple in terms of being extremely aggressive on the peak power that the phones were allowed to start off with in 3D workloads. This resulted in the phones not really able to sustain these performance levels more than 2-3 minutes before having to throttle down.

This year beyond the promised efficiency gains, Apple has said they’ve improved the device’s SoC cooling capabilities, being able to better spread the heat from the SoC to the body of the phone and as such allow the silicon to retain higher performance states. 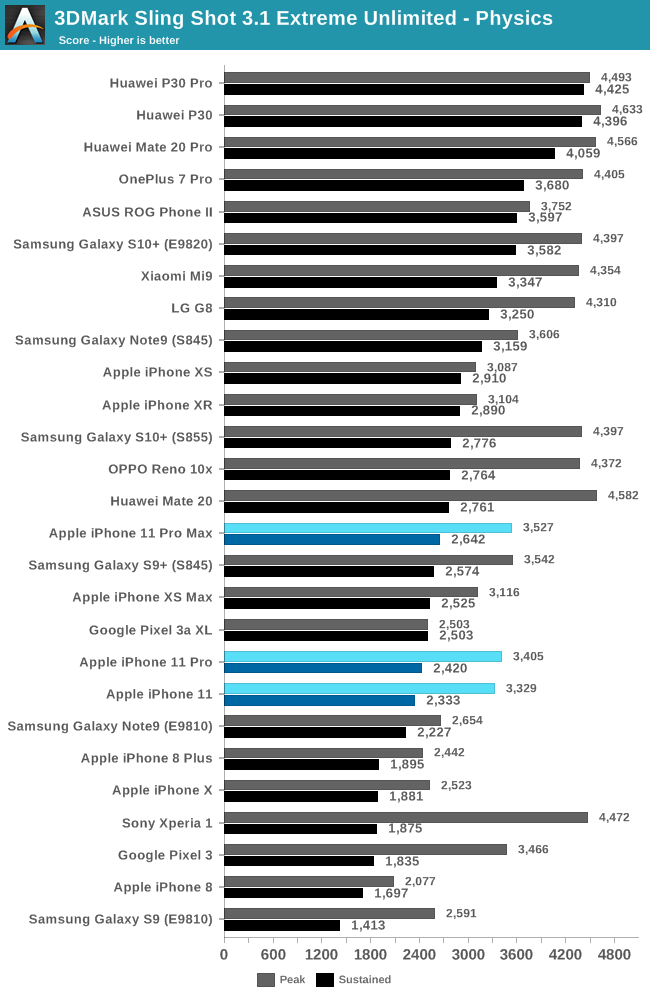 Starting off with the physics test in 3DMark, this is actually more of a CPU workload when power constrained during a GPU workload. In this scenario, the iPhone 11’s fare a bit better in terms of peak performance compared to last year’s iPhones, however they weren’t quite able to maintain the same sustained performance as we saw on the A12 iPhones.

The iPhone 11 Pro Max showcased the better scores than its siblings, and that’s not too much of a surprise given that the phone has the biggest form-factor and thermal envelope to be able to dissipate larger amounts of heat. 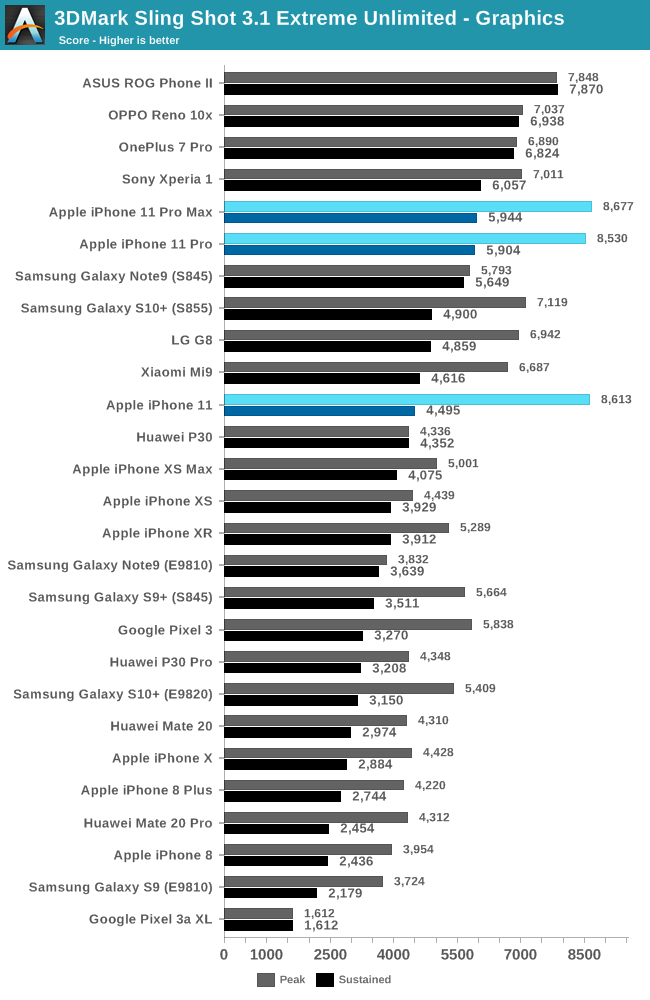 Switching over to the graphics workload which puts a maximum amount of stress on the GPU, we here now see major changes in the scores and rankings. First of all, the new iPhone 11s and the A13 now showcase significant performance increases compared to the A12 devices last year. I’ve noted that Apple was oddly weak in 3DMark when we analyzed the chip, and it looks like Apple was able to resolve whatever the bottleneck was this generation, showcasing a 38% increase in performance. I’ve actually gone back and quickly retested the iPhone XS on iOS13 and did see a 20% increase in performance compared to what we see in the graphs here; I’ll be updating those device’s scores as soon as I have more time.

The iPhone 11 Pros are doing much better than the regular iPhone 11 when it comes to the sustained performance results. I’m actually a bit surprised here given that these are the phones which have the SoC sandwiched between two stacked PCBs, but it seems Apple is able to cool off that whole assembly decently enough. The iPhone 11's scores here are a bit disappointing as it represents an almost 50% degradation in performance.

The new iPhones don’t score quite as well as some Snapdragon 855(+) devices, but this is rather because Apple does not allow the iPhones to get nearly as hot as some of these other devices. I wasn’t able to measure skin temperatures above 41°C on any of the new iPhones. 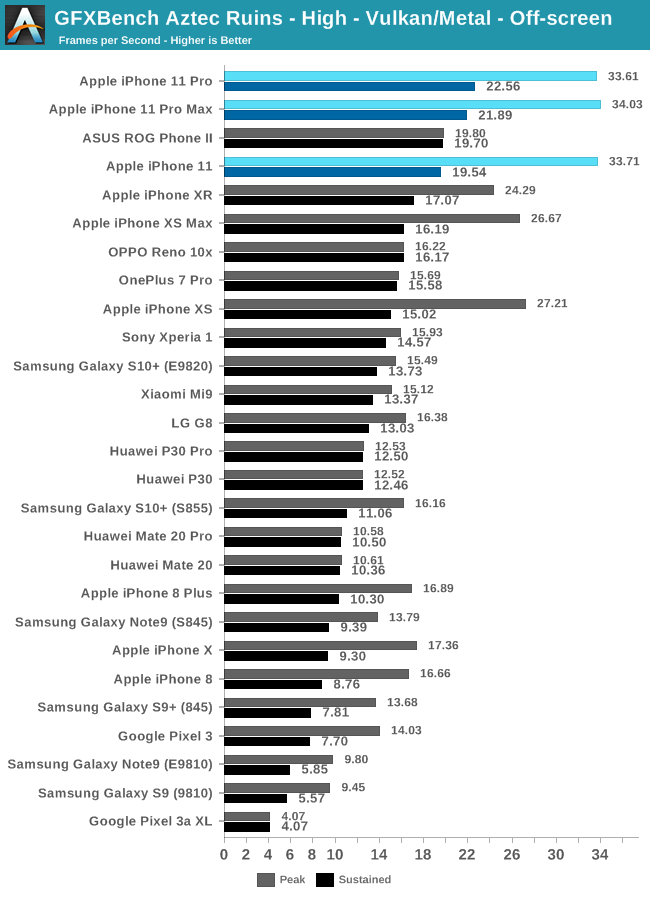 As usual, running a workload for a few minutes until the phone gets lukewarm (not to be mistaken with the longer sustained performance states in the benchmark graphs) will lower the performance and power to more reasonable levels. We’re able to make almost apples-to-apples comparisons here between the A13 and A12 iPhones: at roughly the same 3.8W power usage, the new A13 based device is able to showcase a 35% increase in performance. This performance state of the A13 actually corresponds to the peak performance of the A12, so that’s really nice as we’re able to do the same comparison but for the performance axis: At the same performance of the A12, the A13 is able to use 32% lower power. Not quite the 40% that Apple promised, but that could vary depending on workloads (Or it could be that Apple is quoting GPU power only, while we’re measuring whole system active power here). 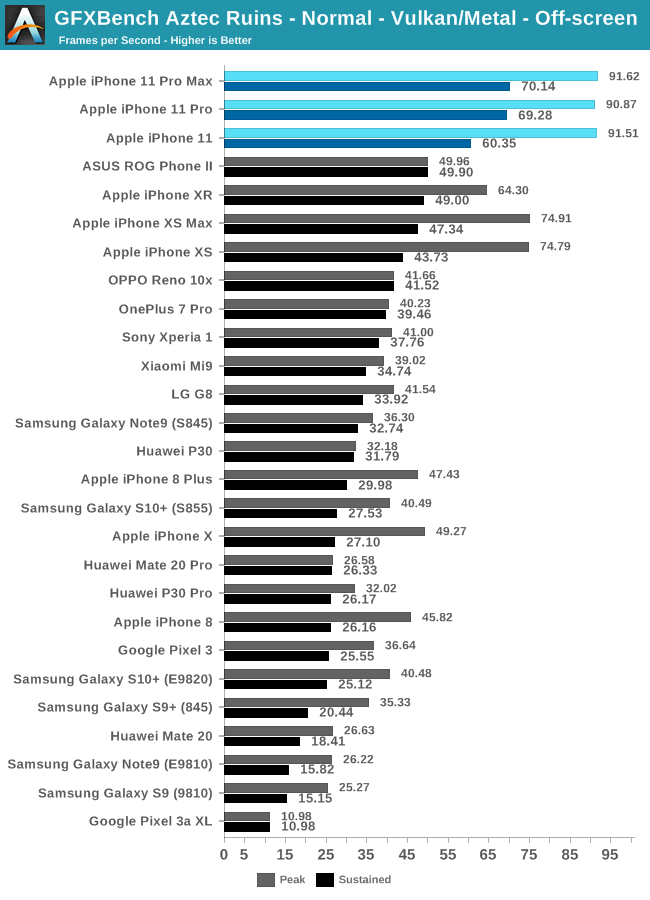 The “Normal” Aztec benchmark, which uses a lower resolution and has less workload complexity, actually fares even better for the iPhone 11s. Peak performance has improved by 21%. At roughly the same power, the A13 is 31% faster, while at almost the same performance, it’s again 32% more efficient. 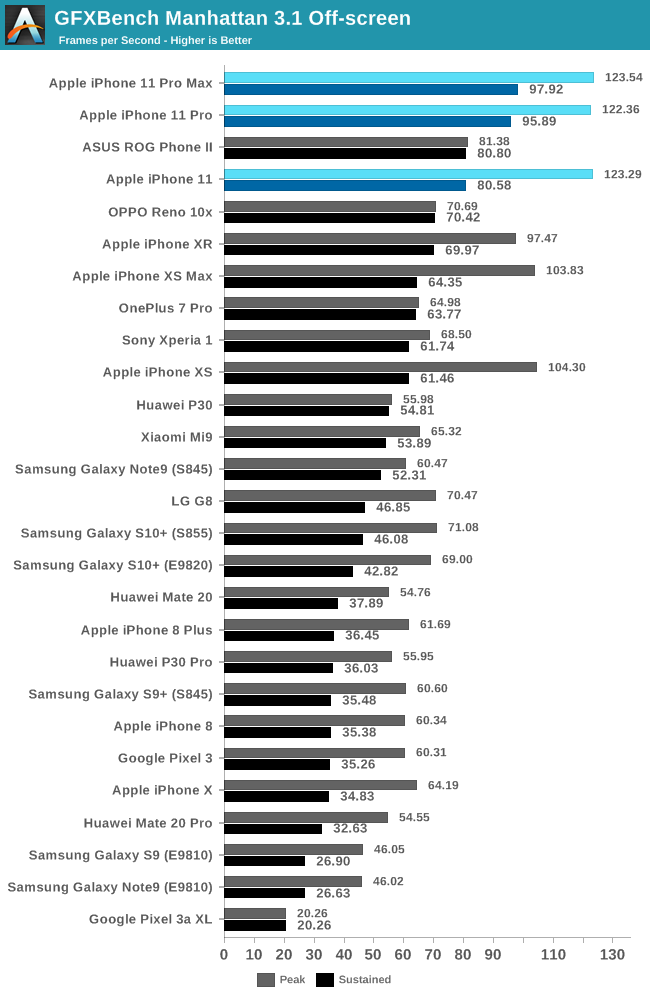 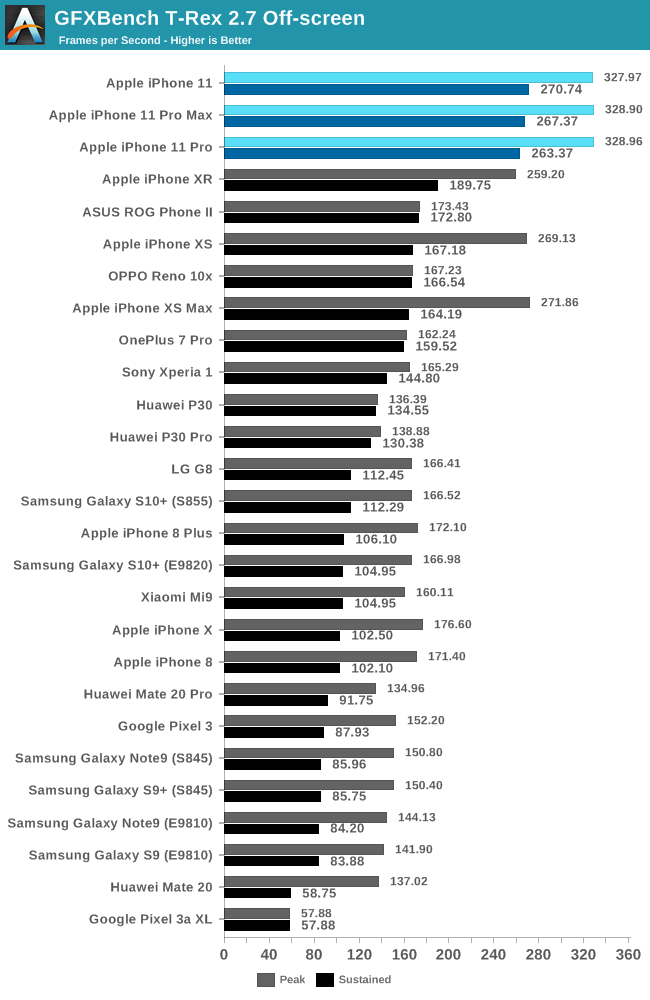 We see the warmed up power draw for the phone here as being quite a bit higher than the other tests. It’s possible that the difference in here is the more CPU load due to the very high FPS figures we’re running the test at nowadays.

Last year the A12 had some extremely impressive GPU improvements and it was the first time that Apple had been able to very clearly jump ahead of Qualcomm in terms of performance and efficiency. I didn't have as large expectations for the A13 this year as a follow-up, but Apple was very much able to impress and improve by greater margins than their marketing materials led me to believe.

First of all, the peak performance of the of the A13 is indeed improved by roughly ~20%. However this is not the metric that people should be paying most attention to. Apple’s sustained performance score improvements are a lot more significant and reach 50 to 60% when compared to last year’s iPhones. As things would seem, Apple’s claims to have improved thermal dissipation for the SoC have worked out extremely well.

The regular iPhone 11 does lag a bit behind the Pro models, as it seems it hasn’t been able to profit from the same design changes. Sustained performance here takes a little hit, but given the phone’s very low resolution I have to wonder if that really even matters in real workloads.

Most of all, Apple’s new GPU microarchitecture on the A13 is extremely impressive. Given the meager process node advancements, I had not expected the company to be able to push for such large performance and power efficiency gains. We’ll need to see some major paradigm shifts from the competition in order for them to be able to catch up in the next generation of devices.

Last year I did complain about the phones getting quite hot during the initial load periods at peak performance, and it looks like Apple has resolved this as I wasn’t able to measure skin temperatures above 41°C on any of the new phones. While I still question Apple’s need to drive the power draw near the limits of the power delivery of the phone, at least this time around it doesn’t create any negative drawback for the user experience.