Differences in system performance between devices with the same hardware chipset basically boil down to one aspect: software. When a vendor starts developing a new phone based on a new chipset, they are supplied by the chipset vendor with a base software package (BSP) containing the boilerplate drivers and Android implementation upon which the vendors can then go and customize and optimize to their liking. This development happens early in a device’s development life-cycle, and different vendors have different approaches as to how they go ahead and further optimize the BSP.

The biggest differences we see between the various devices today simply come down to the matter on when exactly the vendor has forked off their development branch from Qualcomm’s official BSP branch. Even earlier in the year I saw quite a lot differences between various Snapdragon 855 devices such as the Galaxy S10 and the G8, both having different versions of CPU schedulers at different stages of their implementations.

Such differences we also saw earlier in the year where Qualcomm’s Snapdragon 855 performance preview on the reference devices were running lower performing BSPs than what were found on the Galaxy S10. The question is now which vendors put in the effort to try to optimize the most out of the software stack, and which vendors were content to just leave things as they are. 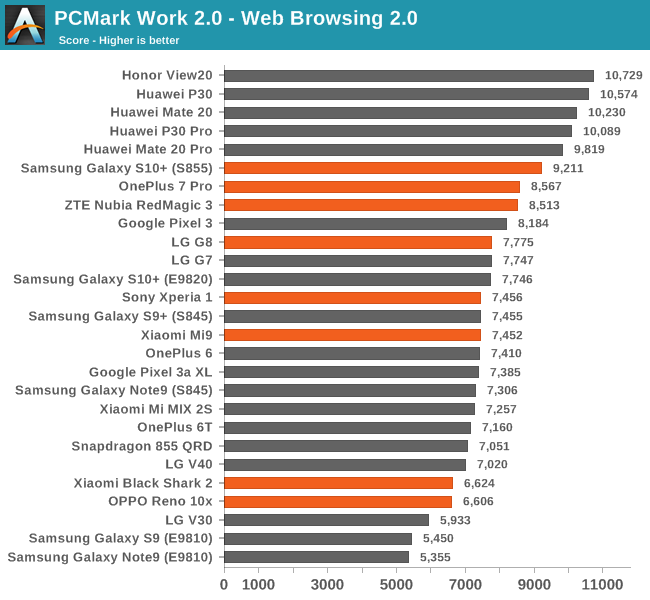 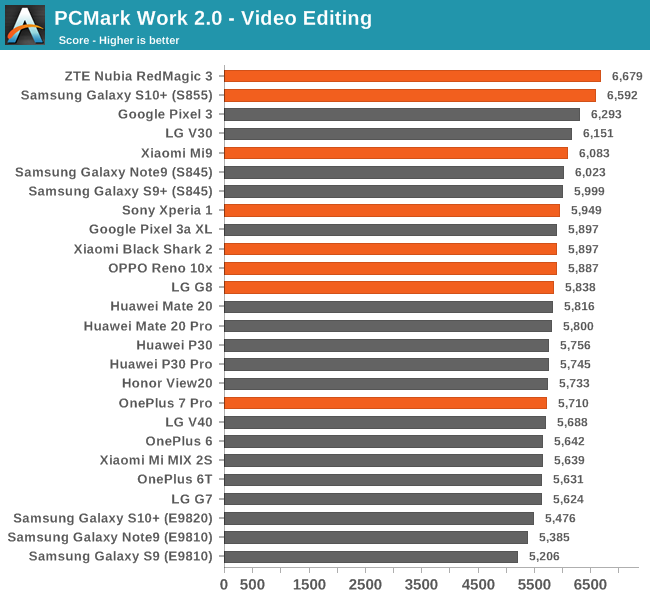 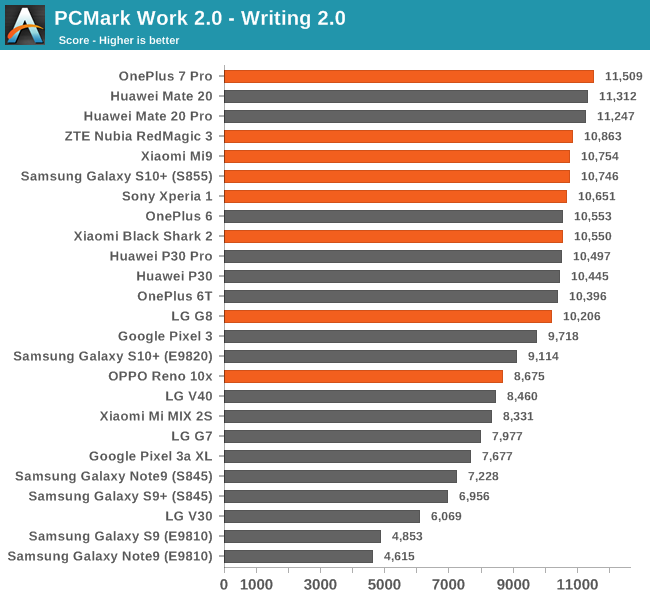 The writing sub-test is amongst the most important ones in PCMark as it’s the most representative of real-world performance experience of a phone. Here, all the Snapdragon 855 phones perform very well, except for the OPPO Reno.

I have to mention that the phone I’ve reviewed came with the Chinese firmware variant. The OS offered a “Performance” mode, however this mode was quite dishonest as it simply pegged the CPU frequencies to their maximum, instead of serving as a more responsive DVFS mode as found on the performance modes of phones such as from Samsung or Huawei. 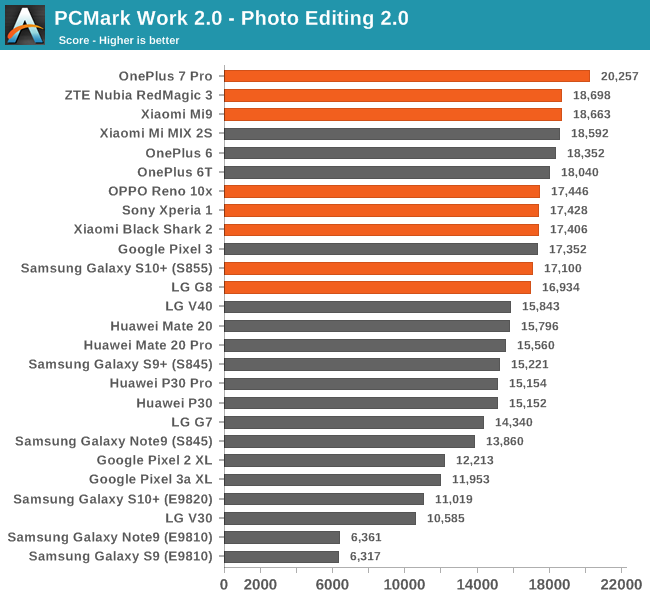 The OnePlus 7 Pro lead the pack here in the Photo Editing test which makes use of RenderScript Android API image processing functions, likely due to it’s 90Hz screen which does improve the measured responsiveness of the benchmark. 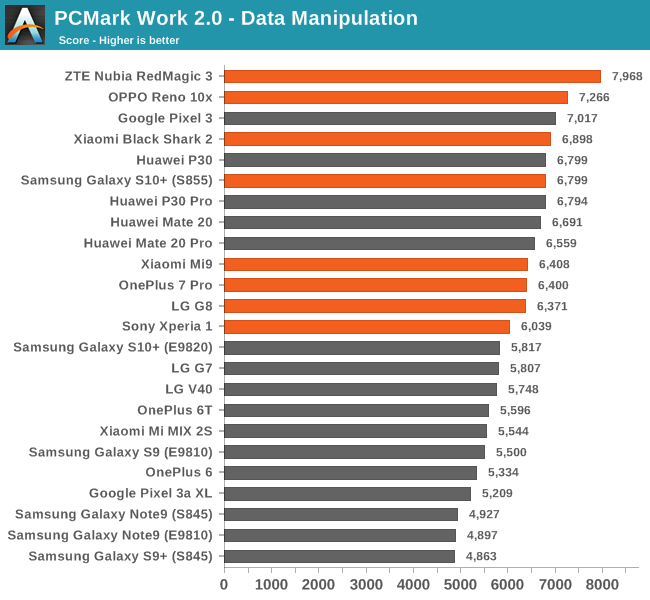 Interestingly, the RedMagic 3 leads the pack here when it comes to the data manipulation test which is characterised my a mixed thread workloads with a larger single heavy thread, pointing out to better scheduling on the part of the ZTE device and its software. 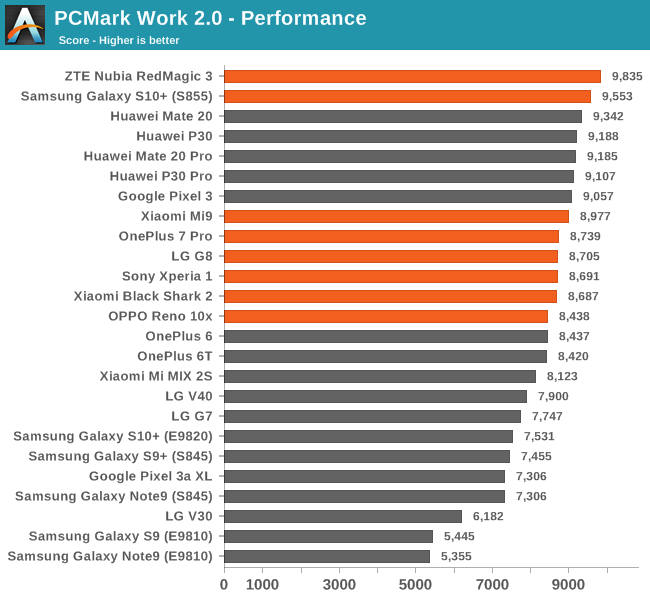 Finally, in the overall score, the ZTE RedMagic 3 comes at the top alongside the Galaxy S10. It seems that these two devices have the newest and most performance scheduler versions made available by Qualcomm, and why they end up at the top of the pack. 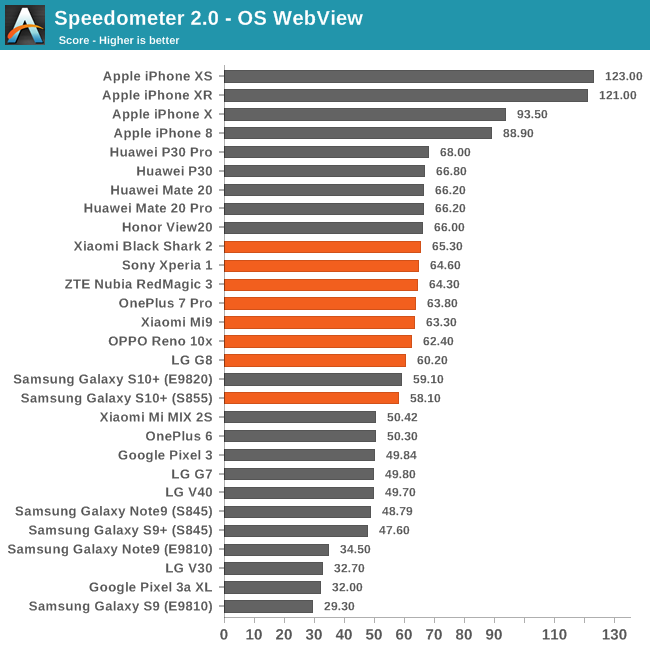 In the JavaScript web browser benchmarks, we again see a bit of a spread spectrum when it comes to the resulting scores. In Speedometer 2.0 the Galaxy S10 oddly remains as the worst performing device whereas other phones are more closely following the top performance of the Kirin 980. 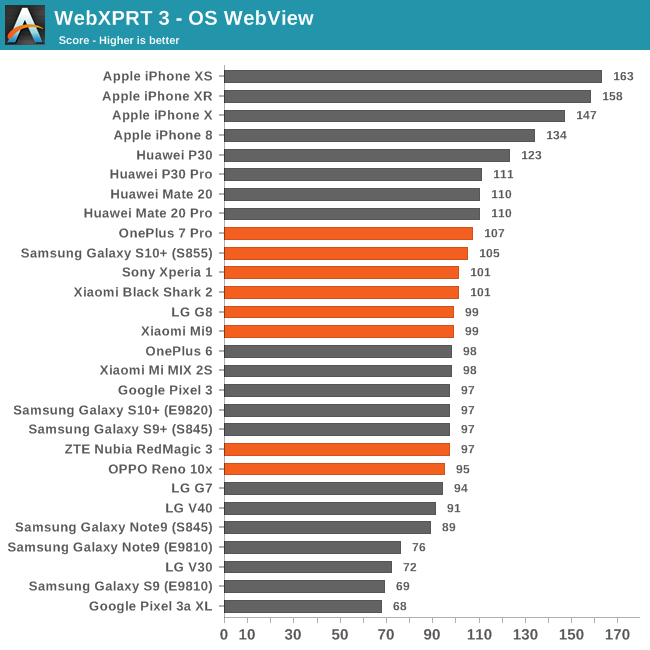 In WebXPRT 3, the S10 and OP7Pro take the top spots, although again slightly behind the Kirin 980 chipset devices from Huawei.

Overall, performance of all the Snapdragon 855 were quite excellent and all phones are among the fastest devices on the market, which should come as no surprise to anyone.