Easily the most exciting kind of video card launch, the dawn of a new GPU architecture is a rare event that’s not to be missed. New architectures give vendors a chance to turn the playing field on its metaphorical head, defying some expectations, setting new ones, and redefining what is possible with a video card. Especially in the case of today’s launch of the Radeon RX 5700 series cards, and their RDNA architecture Navi GPUs, there’s a lot to unpack. But one way or another, this is easily going to be the most important and eventful video card launch of 2019. So let’s dig in.

For those of you who are reading this rare Sunday launch article with a cup of coffee (or are an AnandTech editor who’s been drinking it all night long), perhaps it’s best to cut to the chase and then build out from there. RDNA is an incredibly important architecture for AMD, and it sets the stage for a lot of things to come. At the same time, however, it’s also the first part in a longer-term plan for AMD, with AMD continuing to further iterate on their design over the coming years.

So how does AMD’s first example of RDNA stack up? For AMD and for consumers it’s much needed progress. To be sure, the Radeon RX 5700 series cards are not going to be Turing killers. But they are competitive in price, performance, and power consumption – the all-important trifecta that AMD has trailed NVIDIA at for too many years now.

By the numbers then, the Radeon RX 5700 XT holds an 11% performance advantage over its nearest competition, NVIDIA’s new GeForce RTX 2060 Super. Similarly, the RX 5700 (vanilla) takes a 12% advantage over the RTX 2060 (vanilla). So NVIDIA was right to shift their product stack last week in preparation for today’s AMD launch, as AMD is now delivering the performance of what was last week a $500 video card for as little as $350. That’s a major improvement in performance-per-dollar, to say the least.

And, thankfully, none of this breaks the bank on power consumption either. The RX 5700 fares slightly better than its opponent, while the highly-clocked RX 5700 XT is more power-hungry in securing its performance advantage over the RTX 2060 Super. Which, with the RX 5700 within spitting distance of the RTX 2070 Super in terms of gaming performance, it gives you a good idea of what the power cost was for that last 11%. For the moment then, while AMD hasn’t significantly shifted the power/performance curve versus Turing, they also have avoided the same kind of painful performance chase that delivered toasty cards like the RX Vega 64 and RX 590.

If there is a real downside here, it’s that AMD’s blower-based coolers aren’t going to impress anyone with their performance, even by blower standards. The RX 5700 XT is a bit louder than even NVIDIA’s GTX 1080 Ti, which is a flat-out higher TDP card. To be sure, it’s well ahead of the RX Vega series here (or even the reference 390X I dug out), but AMD has yet to completely master the dark art of quiet blowers.

Tangentially, the biggest risk for AMD here is that they’ve achieved a lot of this efficiency gain by leaping ahead of NVIDIA by a generation on the manufacturing side, tapping TSMC’s 7nm process. NVIDIA will get their own chance to tap into the benefits of the new node as well, which all other elements held equal, is likely to tilt things in NVIDIA’s benefit once again. The fortunate thing for AMD, at least, is that NVIDIA doesn’t seem to be in a hurry to get there, and we’re not expecting 7nm NVIDIA consumer parts this year.

The outstanding question for gamers then is whether AMD’s performance and value advantage is enough to offset their feature deficit. With AMD’s efforts fully invested into the backend of their RDNA architecture as opposed to adding user-facing features, the RX 5700 series doesn’t bring any marquee hardware features to the table, and it doesn’t do anything to catch up to NVIDIA’s RTX cards. The end result is that the Radeon cards are faster for the price, but NVIDIA brings things like ray tracing and variable rate shading that AMD cannot. 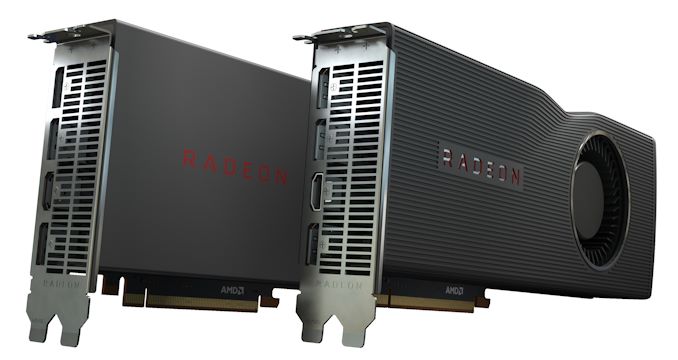 Truthfully, there is no good answer here – at least not one that will be universally agreed upon. Variable rate shading is merely a (cool) performance optimization, but hardware accelerated ray tracing is something more. And NVIDIA has been working very, very hard to get developers to adopt it. The current crop of games arguably isn’t using it to earth-shattering effect (though Metro is coming close), but the slate for 2020 includes several high-profile games. So it comes down to a question of whether to take the higher performance now and risk the fear of missing out later, or taking ray tracing now for an unproven future?

Ultimately, I don’t think there’s a bad buy here between the RX 5700 XT and the RTX 2060 Super it competes with; both are solid cards with some unique pros and cons, and either one should make most gamers happy. As for the vanilla showdown between the RX 5700 and RTX 2060, AMD’s hand is much stronger here (or rather, NVIDIA’s is weaker), which makes for an easy decision. The RX 5700 is faster, slightly less power hungry, and it features a full 8GB of VRAM. The RTX 2060 was always a risky buy with its mere 6GB of VRAM, and now with the RX 5700 there’s really no reason good enough to consider it, even with ray tracing.

As for gamers looking for an upgrade, things are a bit more mixed. The entrance of the RX 5700 series has pushed midrange video card prices down, but not by incredible amounts. On a pure performance basis, AMD’s new cards would be very solid upgrades over the RX 500 series in terms of performance and with similar energy usage, but then they also cost nearly twice as much as the RX 500 series did at launch. The RX 5700 series is perhaps best described as a replacement for the RX Vega series and a successor to the RX 500 series; however it is not a successor to RX Vega, nor is it a proper replacement for RX 500. Instead, the new cards are a more meaningful upgrade for any GTX 970 or R9 390(X) holders who are looking for their next midrange card. In which case the RX 5700 series delivers more performance in leaps and bounds.

In the meantime, it’s a welcome sight to see a more competitive AMD in the video card market. With AMD not-so-concentrically launching a new range of excellent CPUs today, a new cycle of system builds is kicking off, which the RX 5700 series is well-positioned to capture a piece of. Ultimately then, while the Radeon RX 5700 series is not AMD’s Ryzen 3000 moment for video cards, it’s a return to form for the company and it’s great to see competition renewed within the video card space. Now to see where the rest of AMD’s journey with Navi takes them over the coming months.