Power consumption of the new Ryzen 3900X and 3700X are of particular interest because it’s a very key aspect of the new generation chipsets, and AMD promises some extremely large improvements thanks to the new 7nm process node as well as the optimised chiplet design.

When comparing the single-chiplet Ryzen 3700X to the previous generation Ryzen 2700X, we’re seeing quite some dramatic differences in core power consumption. In particular power consumption at each chip’s respective peak frequency is notably different: Although the new 3700X has a 100MHz higher clock speed and thus is further up the exponential power curve, it manages to showcase 32% lower absolute power than the 2700X.

We have to remember that we’re talking about overall absolute power, and not efficiency of the chip. When taking actual performance into account through the higher clock as well as Zen2’s increased performance per clock, the Performance/W figures for the new 3700X should be significantly higher than its predecessor.

What is curious about the new chip is just how closely it follows its power limitations. The new boosting algorithm on the Ryzen 3 series is a particularly “opportunistic” one that will go as high in frequencies as it can go within its constraints, no matter the amount of CPU cores.

The constraints are as follows:

Looking at the total power consumption of the new 3700X, the chip is very much seemingly hitting and maintaining the 88W PPT limitations of the default settings, and we’re measuring 90W peak consumption across the package.

When having a closer look at the new Ryzen 9 3900X, first we have to enjoy the sheer amount of cores of this processor!

Scaling up in threads as well as cores, we’re seeing a similar scaling behaviour, with the large difference being that the 3900X is maintaining higher power consumption per core (and frequency) than the 3700X. Fully loading the chip we’re seeing 118W power on the CPU cores while the package power is falling in at the exact 142W that AMD describes as the PPT limit of 105W TDP processors such as the 3900X.

Another thing to note in the results between the 3700X results and the 3900X, is that un-core power on the latter is quite higher. This really shouldn’t come as a surprise as the processor has a second chiplet who will have L3 and Infinity Fabric that will use more power. 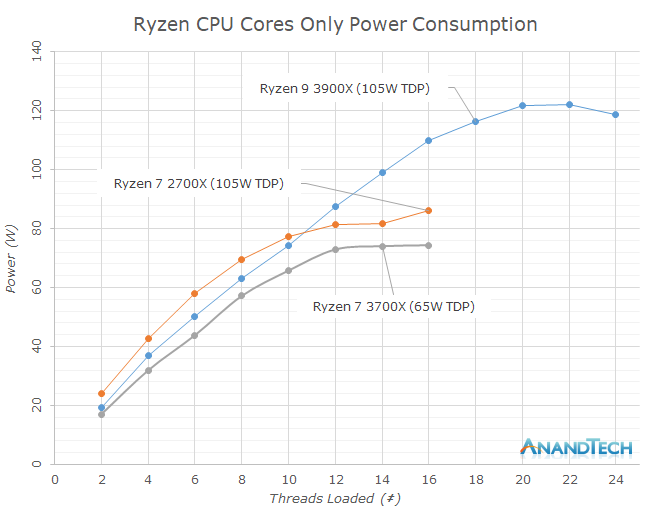 Graphing the three processors together, we see two main aspects: Again the 3900X and 3700X both consuming notably less power than the 2700X, and the 3700X’s hard limit when reaching the 88W PPT limit while the 3900X is able to scale further up till it hits the 142W limit. 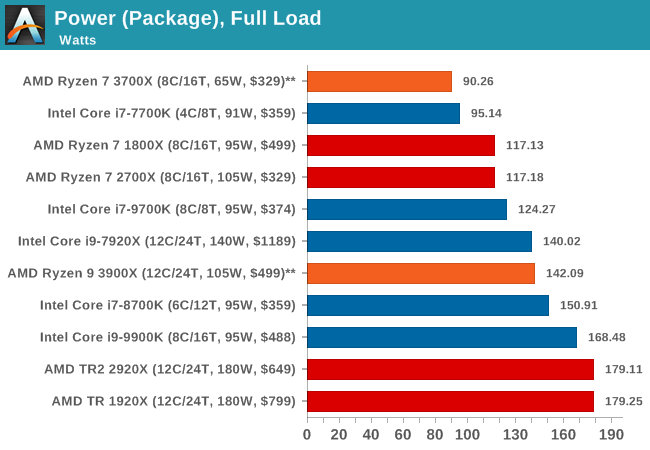 Comparing the full load power characteristics of both SKUs, they end up extremely competitive in both their respective categories. The 3700X’s 90W hard-limit puts it at the very bottom of the CPUs we’ve used in our testing today, which is quite astonishing as the chip is trading blows with the 9700K and 9900K across all of our test workloads, and the latter chip’s power consumption is well over 60% above the 3700X’s.

The 3900X is also impressive given that it’s a 12-core CPU. While posting substantial performance improvements of the 12-core Threadripper counterparts, the 3900X still manages to be significantly less thermally constrained thanks to its much lower power consumption, peaking in at 142W.

The most interesting aspect of AMD’s new opportunistic power boost mechanism lies in a CPU we weren’t able to test today: the Ryzen 7 3800X. At stock behaviour, the chip’s 105W TDP should allow it to behave a lot more like the 3900X when it comes to the higher thread-count frequencies, at least until it maxes out its 8 cores on its single chiplet, which might really put it ahead of the 3700X in terms of multi-threaded performance workloads. 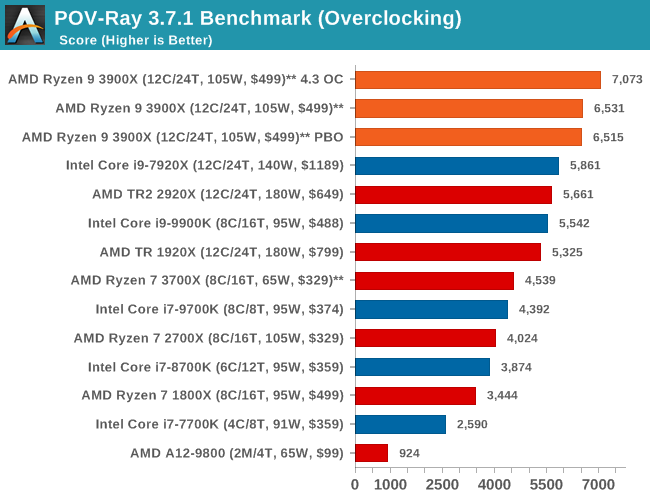 In POV-Ray, running the 3900X at a flat 4.3GHz at 1.35V gives it a 8.2% performance boost over stock. Enabling PBO doesn’t make much difference in multi-threaded workloads for the 3900X as it’s still being limited by the 142W PPT limit.

Unfortunately we weren’t able to further investigate raising the PPT limit for this article due to time contraints as well as currently non-final firmware version for X570 motherboards from the vendors. 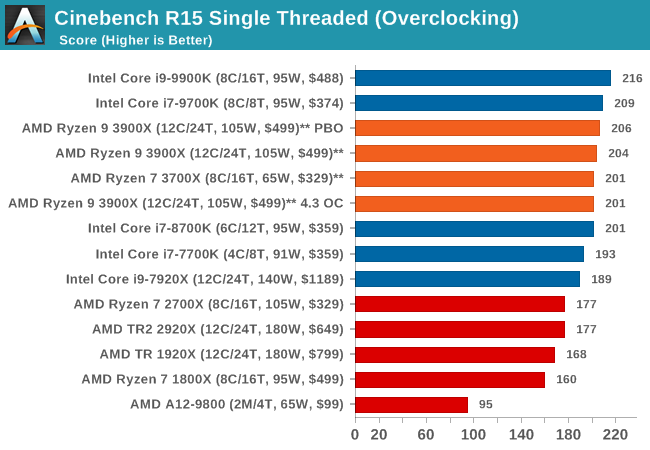 Turning on PBO will increase the single-threaded performance of the 3900X by a few percent, scoring just slightly higher than the stock settings. Naturally the 4.3 GHz flat overclock will regress in performance as it loses out 300MHz peak frequency compared to stock. 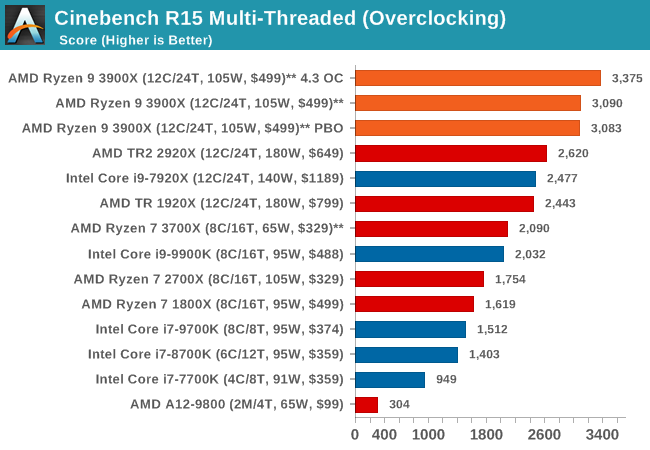