In consumer products, Intel has been placing its new Wi-Fi initiative into every chipset it can find. We’ve seen CNVi-enabled solutions occur on the desktop and in the notebook space for almost two years now, with the goal to make high-performance and low-power Wi-Fi ubiquitous, and to push Intel’s wireless solutions everywhere. Ice Lake is where Intel enables Wi-Fi 6 in such a solution.

If you’ve never come across the term CNVi before, it is Intel’s proprietary interface link and controller which connects the logic parts of the wireless connection on the chipset to the antenna and radio frequency analog parts which are found on a different module. This allows Intel’s partners to use different antenna ‘RF’ modules depending on what it wants to support, such as single antenna designs, dual antenna designs, or higher bandwidth modes.

Because CNVi is a proprietary interface, Intel has no plans to license it, and therefore the only RF modules you can buy to support it come from Intel. Intel states that its CNVi solution enables the high frequency digital logic to be built on its 14nm process with the chipset, and the RF analog side can be built on 28nm UMC which is better for analog signals and performance than any of Intel’s currently available manufacturing processes. Overall Intel states that using an external RF chip in this fashion affords a 15% silicon package reduction and a 40% pin reduction. 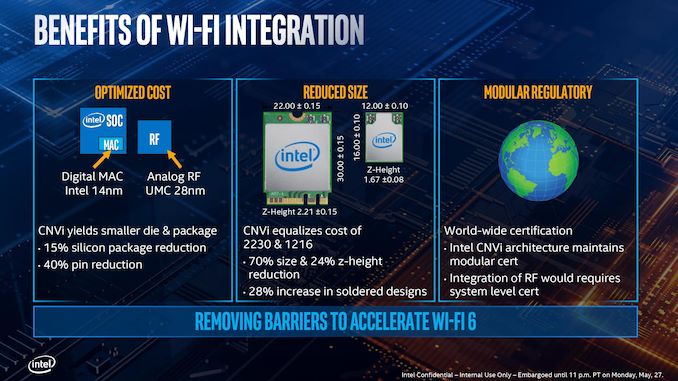 CNVi RF modules can either be an M.2 module (2230 = 22mm x 30mm) or as a soldered module (1216), which respectively allows for modularity, or for decreasing z-height for thin and light designs. Intel also states that this method of supplying the Wi-Fi, as separate digital and analog silicon, allows Wi-Fi certification to be done at the module level, rather than at the system level, simplifying the process for its partners. 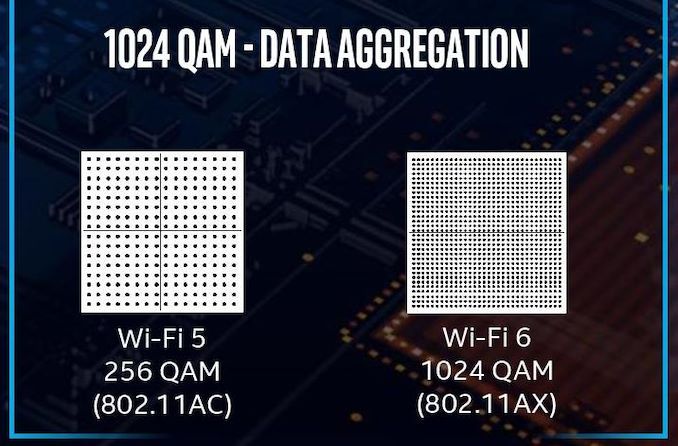 As an overarching technology, Wi-Fi 6 promises better bandwidth than standard Wi-Fi 5, as well as support for more devices on the same network. Technically this increased bandwidth comes down to data/time aggregation through the air as a benefit of OFDMA support, as well as 1024-QAM signaling design rather than 256-QAM signaling for increased throughput. 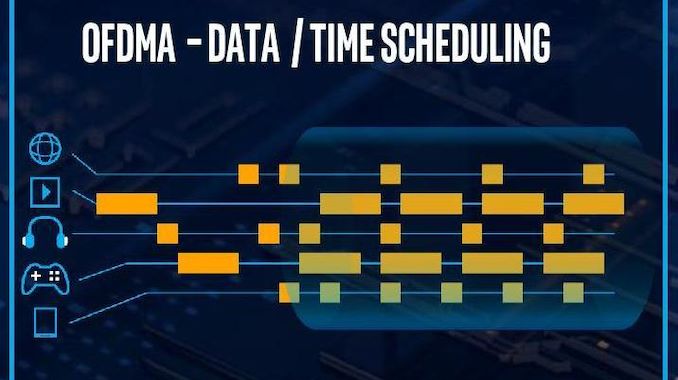 Wi-Fi 6 also has a lot of additional optional elements to the standard, which Intel believes will cause a good deal of confusion in the market. Naturally, Intel suggests that its partners that use a CNVi Wi-Fi 6 implementation also promote Wi-Fi 6 access points built on Intel’s platforms for simpler integration.

At this point in time, there are two main Wi-Fi 6 controllers: Intel’s AX200/AX201 2x2 CNVi module which uses the on-die enhancements, and Rivet Network’s AX1650 M.2 module which doesn’t use any of the on-die enhancements as it connects through a PCIe lane on the chipset. Technically both are built with the same silicon, as the companies are working together on the design, however Rivet is implementing its own acceleration techniques due to engines inside the hardware.

*The asterisk in the title of this page is because you still need external hardware in order to enable it, and to do it in the best way requires Intel-only hardware. You can use other vendor hardware, but you don’t need something special on the SoC to enable that.