A common thread in modern microprocessor design is being able to use the power budget available. There have been many articles devoted to how to define power budgets, thermal budgets, and what the mysterious ‘TDP’ (thermal design power) actually means in relation to power consumption. Intel broadly uses TDP and power consumption simultaneously, along with a few other values, such as power limits 1 and 2 (PL1 and PL2), which apply to sustained power draw and peak power draw respectively. Most Intel processors up until this point will allow a processor to turbo, up to a peak power draw of PL2 for a fixed time, before enforcing a PL1 sustained power draw. This is all very OEM dependent as well. However, for Ice Lake, this changes a bit.

For Ice Lake, Intel has a new feature called Dynamic Tuning 2.0, which implements a layer of machine learning on top of the standard turbo mode. The idea behind DT2.0 is that the processor can predict the type of workload that is incoming, say transcode, and adjust the power budget intelligently to give a longer turbo experience. 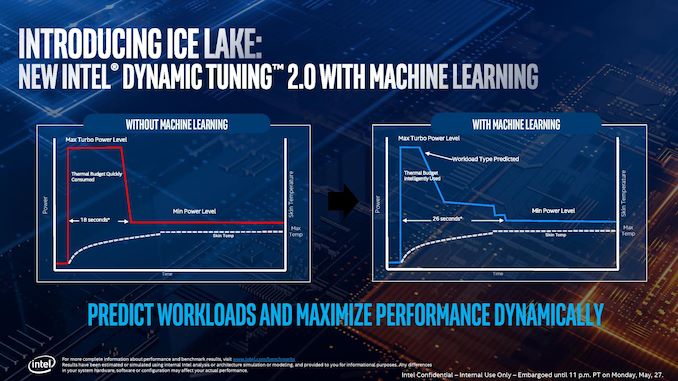 Technically the concepts of PL1 and PL2 don’t magically disappear under this new regime – the processor ends up going below max turbo because the algorithm predicts that the user won’t need it, and this saves up ‘power budget’ in order to enable the turbo to work for longer.

This is a topic that Intel will hopefully go into more detail. We do know that it requires collaboration at the OS level, but how these algorithms are trained would be a useful trove of information. It is unclear whether Intel will allow this feature to be enabled/disabled at the user level, for testing purposes, but it should be noted that unless it is by default ‘on’ for OEM systems, we might end up with some systems enabling it while others do not.