Video recording on the OnePlus 7 Pro is a bit more disappointing that what you’d expect the phone to be capable of. The core issue first and foremost is the fact that currently video recording is only possible on the main camera sensor. There are some ways to switch over to the wide-angle, however this is not supported by default in camera applications.

EIS is engaged for the 1080p30 and 4K30 recording modes only, and there’s some issues with the implementation. First of all in the 1080p video above we see that it takes 2 seconds for the EIS to actually engage at the beginning of the video which is something I hadn’t seen in a phone before. Secondly, in the 4K30 video also towards the beginning when walking underneath the tree canopy we can see some severe stabilisation jitter / artefacts. These are in fact also present in the original video files and are not a side-effect of YouTube compression, meaning it’s a side-effect of the EIS implementation.

The 60fps capture modes don’t use EIS. The 4K60 footage in particular quite outstanding even though it’s quite shaky. The issue with this mode is that OnePlus went completely overkill in terms of the encoding bitrate. At a whopping 160Mbps the H.264 stream takes up 1.6GB of storage space for 84 seconds of footage, and OnePlus doesn’t offer H.265 to reduce the storage requirements.

Overall, I was very disappointed with the video recording ability of the OP7Pro as there’s evident major flaws in its implementation. I wish that at least OnePlus would enable the other camera modules, as in effect they’re useless in video recording. Let’s not go into the fact there’s a lack of any kind of higher dynamic range recording, let it be HDR to SDR file capture or even outright native HDR recording.

The OnePlus 7 Pro is the company’s first phone (along with the regular OP7) that features stereo speaker playback. Speaker audio quality is something OnePlus has suffered for a few generations, at best landing at something average and adequate, but not sufficient to compete with the higher-end devices from the competition.

The new OP7Pro features both a redesigned main speaker as well as introducing a eapiece speaker capable of stereo playback.

First of all, let’s investigate the device’s loudness: 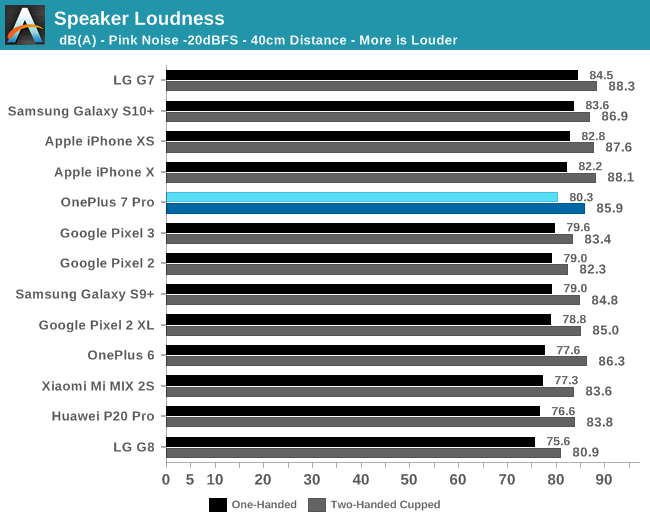 The OnePlus 7 Pro does get quite loud, but what’s more important here is that the phone's frontal directionality has improved significantly compared to the OnePlus 6/6T. This was something that the predecessors suffered from especially, and just putting your thumb/palm on the speaker grill would almost completely mute the phone.

Another improvement in this regard is that OnePlus has moved the main speaker grill from the left side to the right side of the phone. In landscape mode the company noticed that the vast majority of users turn the phone 90° counter-clockwise. This new change thus helps against muffing the speaker grill in your right palm. 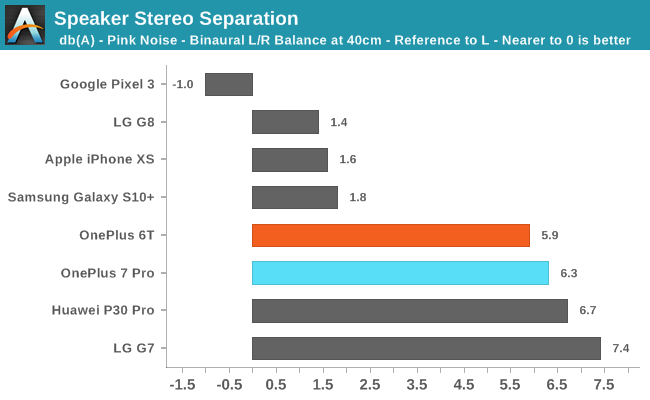 Whilst the new earpiece serves as a stereo speaker, the problem is that the main speaker is still overwhelmingly louder and there’s still very much a bias towards the right side when listening to audio in landscape.

The main reason for this is that the earpiece speaker has a much more limited frequency range than the main speaker, and thus sounds significantly quieter than stereo speaker setups from the competition. 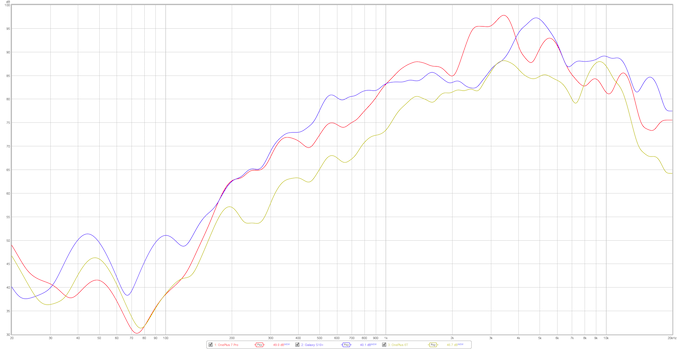 In terms of the frequency range between the 7Pro, 6T and the S10+, OnePlus has definitely made some large improvements and the 7Pro sounds leagues better than its predecessor. It’s not quite as good as what Samsung is able to offer, particularly there’s a disadvantage in the bass, lower mid-range as well as the higher trebles frequencies, so the phone definitely doesn’t sound as full or clear. Still, it’s a good speaker setup, even though not quite top of the line.

No headphone jack, no 3.5mm dongle, no headphones?

I’ve dreaded the removal of the 3.5mm headphone jack on the 6T, especially since OnePlus did nothing with the freed up internal space in that design (Seeming this also applies to the regular OnePlus 7). With the 7Pro, the issue I have is that OnePlus doesn’t even offer a dongle anymore after one half-generation, nor does the company give you any bundled headphones at all.

I understand that the company is heavily promoting its own audio accessories, but we’re not in the same situation as Apple which included the 3.5mm adapter for several years before finally dropping it from the package. It’s quite the anti-consumer move.