The OnePlus 7 Pro comes with a 4000mAh battery with a standard nominal chemistry voltage of 3.85V which results in a capacity of 15.4Wh. It’s to be noted that this is the typical capacity of the battery while the rated capacity is 3880mAh / 14.93Wh.

We’ve seen from competing smartphones that what’s almost always more important than the actual battery capacity is the power efficiency of the components. We do expect the OP7Pro to have a higher power drain than competing smartphones due to the 90Hz screen, but the question is as to exactly how much more drain we’ll be seeing.

The battery testing results were done in the native 1440p resolution of the screen. 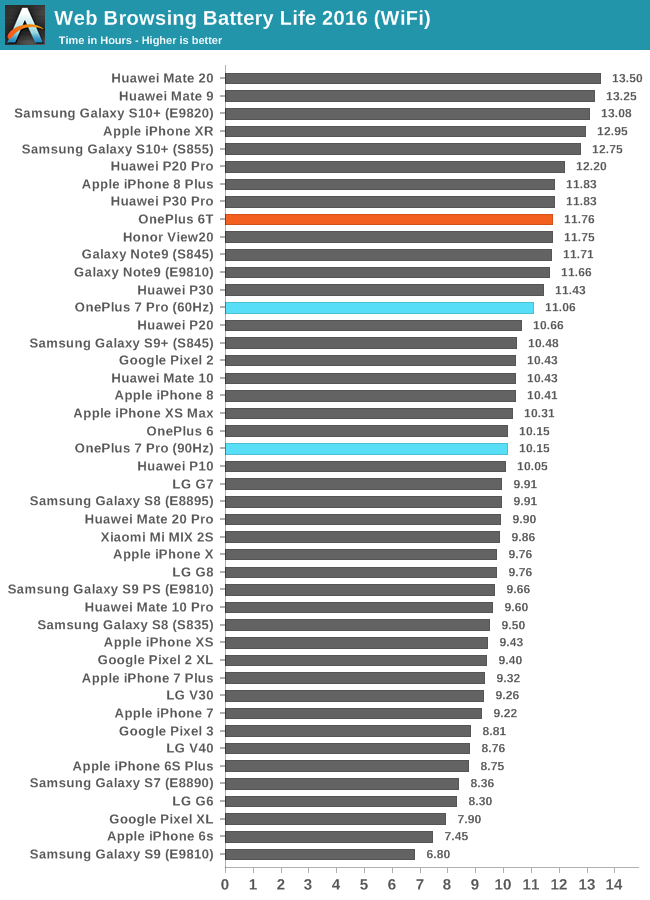 As mentioned before on the Display page, I had measured the device’s base power consumption with some conflicting numbers depending on methodology. One set pointed out the OP7Pro had quite large power drain, while the other set pointed out it’s almost as good as the Galaxy S10’s. The actual battery longevity results should shed more light onto this:

As I had anticipated, the OnePlus 7 Pro’s battery results veer more towards the higher power drain figures. In our web browsing test the OnePlus 7 Pro achieves good results, although it’s not able to keep up with the competition this year nor with the OnePlus 6T from last year.

Here it seems the phone does indeed have quite high base power consumption figures around the 550mW mark and the 100mW difference between 60Hz and 90Hz modes seems to be correct. 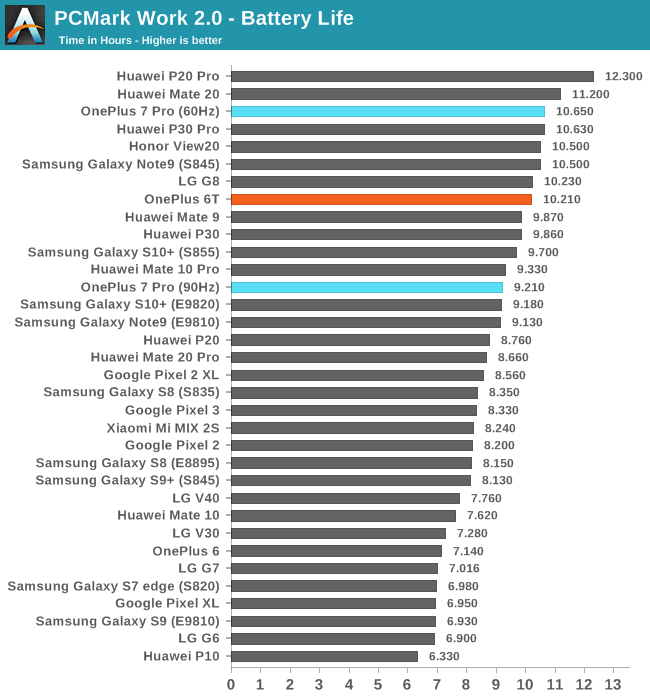 In PCMark, the 7Pro comes with good to great results depending on whether we’re using the 60 or 90Hz modes. I only had limited time with the device so I couldn’t also do the 1080p resolution battery life tests, and frankly I believe they’re not very relevant to the majority of users as there’s not much reason to use that mode.

In PCMark the 60Hz to 90Hz battery delta is slightly more pronounced than what we saw in the web browsing test, and this might be simply because the device is doing more computational work.

Overall, the OnePlus 7 Pro’s battery life is good, although it’s clearly not the best out there.

For me personally I use my phones a lot more in the evening and tend to use dark mode in the OS and apps. Under such scenarios the effect of a phone’s base power consumption will be more amplified as it represents a larger % share of the total consumed energy – and in this case the OP7Pro will give a noticeably worse result than say Samsung’s current generation.

Still, this is seemingly the first high-refresh-rate phone on the market that has completely useable battery life without any major handicap, all thanks to OnePlus’s optimal hardware implementation of the 90Hz refresh rate. In general if you’re buying the phone, you’re buying it for the 90Hz mode, and it makes very little sense to pay attention to either the 1080p or even 60Hz modes that the phone gives you.

A Word About 30W Charging

The OnePlus 7 Pro comes with a 30W charger. Here OnePlus is opting for a high current charging standard that goes up to 6A at 5V. The benefit of using a lower voltage and high current standard is that the phone’s PMIC will have a higher conversion efficiency when transforming the voltage down to the 4.4-4.5V cell battery charging voltage, reducing phone heating.

I am still extremely sceptical about these high power charging standards as they will more quickly degrade your battery capacity over time. At 30W / 5A for a 4000mAh battery, this means a peak charging rate of 1.25C which is well above the commonly agreed peak rated limit of 1C. Personally I would not trust to use such a charger in other than urgent circumstances, and generally I’m a bit worried at the battery longevity aspect of things with the current industry’s trend of racing to ever higher charging rates as a means of product differentiation.

Besides that, it’s also relatively disappointing that the OP7Pro doesn’t support wireless charging, even though the phone is relatively thick and does have a glass back. OnePlus said that this is something they’ll be looking into for future products.