Throughout this review we've taken a comprehensive look at performance of the DeskMini A300 for a range of SFF PC workloads. It is now time for some closing thoughts from two perspectives - the Ryzen 5 2400G APU, and, the DeskMini A300 motherboard and chassis combination.

SFF machines are popular as space-savers in office environments. For typical office productivity and business workloads, we see that the BAPCo benchmarks and PCMark 8 approximately lead to the same conclusions. The energy consumption metrics show that Intel-based solutions are delivering better performance per watt for equivalent performance. However, the Ryzen-based solutions have lower upfront costs for the same performance. Meanwhile the PCMark 10 overall score shows the Ryzen 5 2400G in much better light because of the inclusion of 3DMark GPU workloads as contributors to the score. 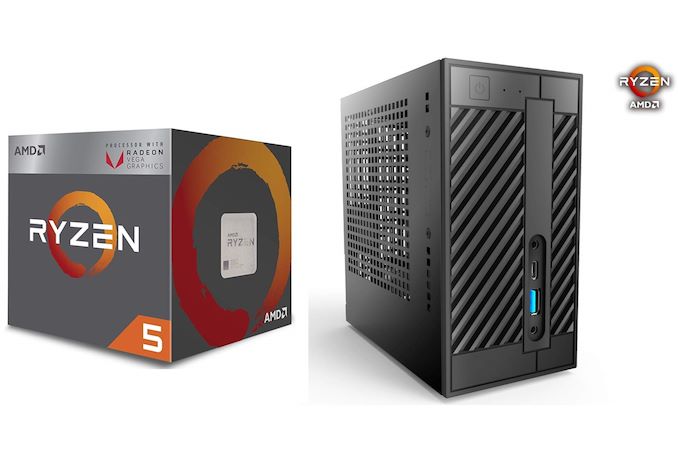 If a PC with gaming credentials is required and the budget doesn't allow for a discrete GPU, a Ryzen APU like the Ryzen 5 2400G is simply the only choice. There are no ifs, ands, or buts here. Even the most powerful integrated GPU that Intel can offer (Intel Iris Plus Graphics 655) is way behind the Radeon RX Vega 11 in the Ryzen 5 2400G. This is across all our gaming benchmarks, irrespective of the quality settings or resolution. The reason for this is easy to infer from our thermal stress tests. With the GPU alone active, the DeskMini A300 draws more than 65W at the wall. In comparison, the most powerful Intel iGPU-equipped system - the Bean Canyon NUC - draws 48W in the same scenario. The corresponding number for the DeskMini 310 with the Core i3-8100 is around 42W. The Radeon Vega architecture and the APU design allows for a much higher power budget for the GPU compared to Intel's designs. All these contribute to the excellent graphics performance of the Ryzen 5 2400G.

On the multimedia front, unfortunately a Ryzen APU-based SFF PC is not advisable for anything beyond the most casual of uses. The hardware itself is actually rather capable (as noted above), but the the current state of the Radeon drivers holds it back. Overall, as a vanilla 1080p playback machine with minimal DRM requirements (read, playback of YouTube videos and basic Netflix streaming), it can do a decent job (assuming power efficiency is not a big factor). However, as soon as we get to more contemporary or arcane requirements (Netflix with 4K HDR, VP9 Profile 2 playback with open source software like VLC or MPC-HC, or UHD Blu-ray support), we run into driver issues or hardware limitations, as described in the HTPC sections.

These sorts of compatibility issues are disheartening to see, given that the system natively supports 4Kp60 output on the HDMI port with HDR. The true HDMI 2.0a output is is contrast to Intel's native HDMI 1.4a output (which has to be worked around with an extra board component by OEMs wanting to provide a HDMI 2.0 port in their system). Folks looking to build a modern media consumption-centric HTPC should look at Intel-based platforms such as the Bean Canyon NUC. The silver lining here, at least, is that these appear to be software issues; so AMD has an opportunity to fix these problems (and change our minds) in future driver versions.

Moving on to our choice of other build components in the DeskMini A300, we first talk about the Western Digital WD Blue SN500 NVMe SSD. Despite its PCIe 3.0 x2 interface, the performance per dollar metric, as well as its general consistency, is excellent. The 500GB version we used in our build is available for as low as $65. This complements the cost of the DeskMini A300 ($190 or $150) and the Ryzen 5 2400G ($150) when attempting a budget build. We did splurge a bit on the RAM, opting for the G.Skill Ripjaws Series DDR4 SODIMM rated for 3000 MHz operation (2x $50). The reason to not go in with SODIMMs operating at lower frequencies was to ensure that we were able to provide the APU with more that the bandwidth available at its rated memory clocks (DDR4-2933) while not losing out much on the latency front. With its 16-18-18-43 timing configuration, the G.Skill Ripjaws series DDR4-3000 kit represented the best balance of price, bandwidth, and latency. 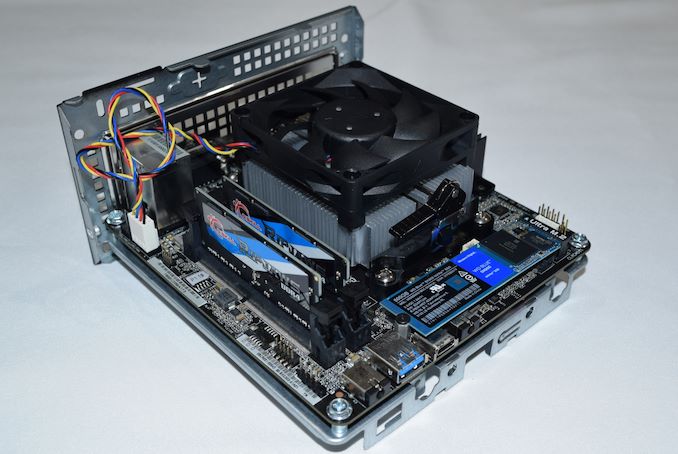 Coming back to the DeskMini A300 itself, the chassis is the same as what we have seen in the previous DeskMini 1.92L machines. It will not win any industrial design awards, but it is functional enough. It has plenty of ventilation to aid in dissipating the heat from the board components. The external I/O and the internal board slots represent the best that can be done with the A300 Promontory chipset. Without spare PCIe lanes, the board can only have the NVMe, SATA, and USB ports driven directly by the Ryzen APU + chipset. That is still enough to provide plenty of storage options on the motherboard (given its mini-STX size), but additional USB ports would really be nice to have. ASRock should have included the dual USB 2.0 header cable (currently optional) as part of the package. The DeskMini A300 scores over the comparable Intel-based DeskMini 310 system by including a second M.2 NVMe SSD slot. However, it doesn't have the microSDXC slot available in the latter. In terms of external I/O capability, the two budget mini-STX PCs are equivalent.

Overall, the DeskMini A300 is one of the first AMD-based SFF PCs in the market. And while the SFF situation with AMD's Ryzen APUs is still a uneven at this time, it's still proven a capable system that we can recommend for specific usage scenarios. Particularly, if the PC is expected to service any type of gaming/graphics workload, it provides way more performance compared to any Intel-based alternative at similar price points (i.e, ruling out the use of a discrete GPU). For traditional office and business workloads, it gets the job done; and while it's not particularly energy efficient, the upfront cost itself is lower.

In other words, as is often the case, there are pros and cons to the DeskMini A300. It's a rather capable machine when playing up its strengths, but potential buyers will definitely want to first make sure their workloads are a good fit for what the SFF PC can offer.