The WD Blue SN500 supports the usual set of NVMe power and thermal management features we expect to see on consumer NVMe drives. The warning and critical temperature thresholds are rather close together: the warning temperature of 82°C is higher than we usually see while the critical temperature is fairly normal. Between this and the generally low power consumption of the SN500, thermal throttling seems quite unlikely.

The SN500 defines three active power states, but declares the same 2.5W maximum for the first two states, making the second one redundant. The two idle states promise great power savings, though a 44ms wakeup from the deepest idle state is a bit slow. 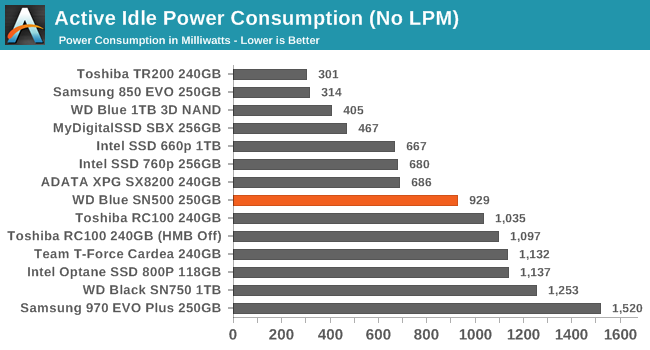 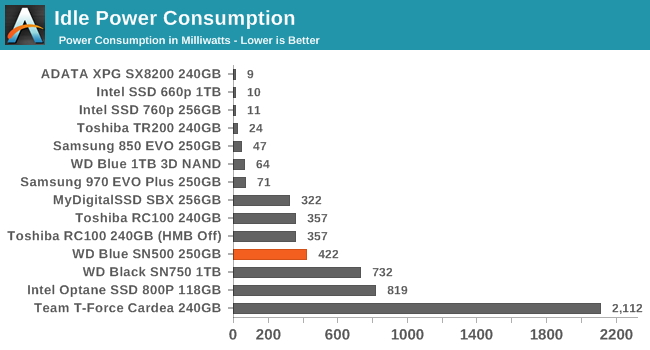 The active idle power consumption for the SN500 of a bit less than 1W is surprisingly high given that we've seen load power consumption starts at just over 1W—there's only about 130mW difference between the drive sitting ready to work, and it performing continuous random reads at QD1. Like the WD Black SN750, the WD Blue SN500 doesn't do a very good job of saving power when low-power idle states are enabled on our desktop platform. The original WD Black SSD that used a Marvell controller did a great job of handling systems with slightly broken PCIe power management, but Western Digital's own controllers seem to be quite picky about the conditions required to really go to sleep. 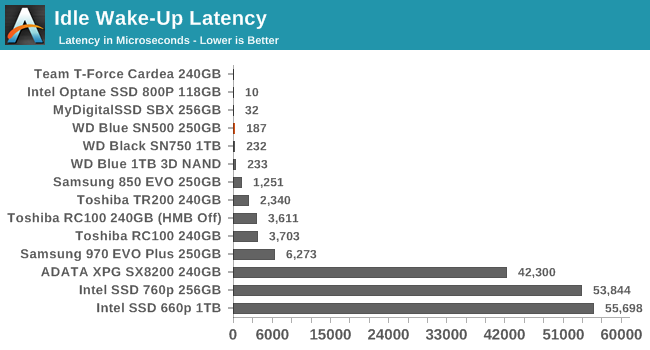 Since power management on the WD Blue SN500 doesn't work well on our desktop testbed, it is good to see that it only takes a fraction of a millisecond for the SN500 to get back to business.