Another mid-range board from ASRock is the X570 Steel Legend which blends a good range of features in with solid aesthetics with addressable RGB within its the power delivery and chipset heatsinks. The board sits on a black and urban camouflage themed PCB, with steel silver heatsinks, with elements of black to add contrast. This model is also very similar to the ASRock X570 Extreme4 in terms of components used, feature set, and overall design with the main difference coming via the color scheme. 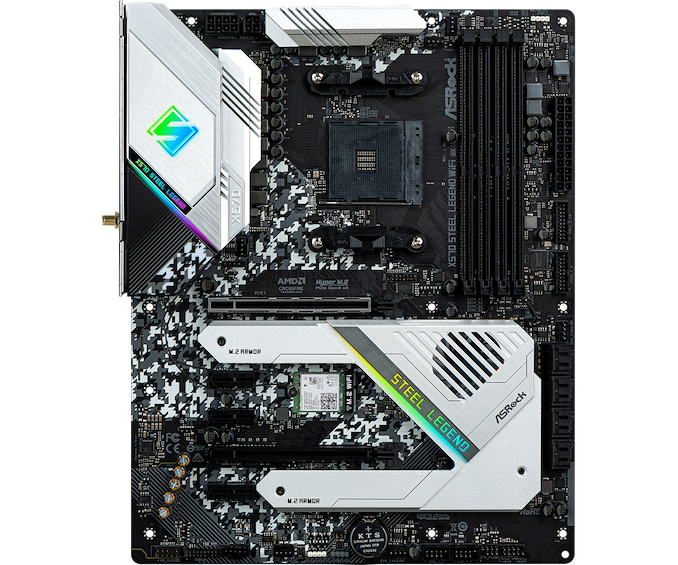 In addition to the straight-lined heatsinks which makes the board look attractive, is a solid feature set including two full-length PCIe 4.0 slots which run at x16, and x16/x4 due to chipset constraints. This means up to two way AMD CrossFire multi-graphics card setups can be used. In the top right corner is four memory slots with support for up to DDR4-4666 which is very impressive, and these slots support up to a maximum of 64 GB. The storage capabilities of the ASRock X570 Steel Legend include two PCIe 4.0 M.2 slots each with its own individual heatsink, and blends into the actively cooled X570 chipset heatsink quite nicely. Also featured is eight SATA ports with support for RAID 0, 1, and 10 arrays, and ASRock's U.2 kit which is available separately is also supported.

The rear panel on the ASRock X570 Steel Legend is more comprehensive for a mid-range model than the ASRock X570 Phantom Gaming 4, with a single USB 3.1 G2 Type-C, one USB 3.1 G2 Type-A, and six USB 3.1 G1 Type-A ports. A single Ethernet port is powered by an Intel I211-AT Gigabit NIC, and while there is no wireless interface included, an M.2 Key E 2230 slot with inserts included on the IO shield allow for users to install their own. There are five 3.5 mm color coded audio jacks with a single S/PDIF optical output which are driven by a Realtek ALC1220 HD audio codec, a DisplayPort 1.2 and HDMI video output for Ryzen 2nd and 3rd gen APUs, and finishing off the rear panel is a PS/2 combo port.

The ASRock X570 Steel Legend offers users a similar feature set to its X570 Phantom Gaming 4, but with better onboard audio (Realtek ALC1220 vs ALC1200) and utilizes addressable RGB effectively within the heatsinks. This model also uses a straight forward 10-phase power delivery and includes an 8-pin and 4-pin set of 12 V ATX CPU power inputs to provide power to the processor. Price wise, the ASRock X570 Steel Legend has an MSRP of $200, while users in the USA can also get a version with Wi-Fi 6 at a cost of $210.