The ASRock X570 Phantom Gaming 4 is the more value orientated model of the three Phantom Gaming branded X570 models at launch. Retaining a lot of similar features from the other models, the X570 Phantom Gaming 4 focuses more on offering value for money with a mix of good quality components, simple yet effective aesthetics, and represents its mid-range gaming inspired option. The overall design consists of a black and grey themed PCB, with a black and grey actively cooled chipset heatsink, and a grey power delivery heatsink which is designed to keep the CPU VCore area cool. 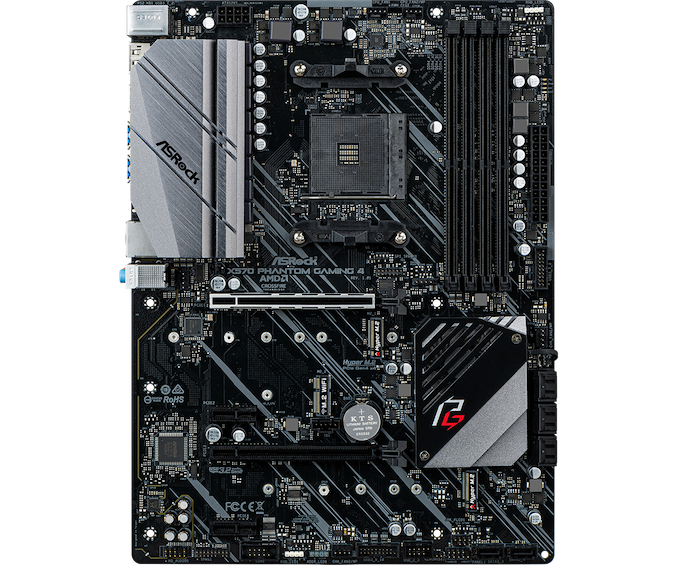 On the bottom half of the board is two full-length PCIe 4.0 slots which operate at x16, and x16/x4. This is due to the Ryzen 3000 series processors driving the top lane at x16, while the bottom full-length PCIe slot is driven by the X570 chipset. There are also two PCIe 4.0 x1 slots, as well as two M.2 slots with the top slot supporting PCIe 4.0 x4, and the bottom M.2 slot allowing for both PCIe 4.0 and SATA SSDs. Also featured are eight SATA ports which support RAID 0, 1, and 10 arrays. ASRock's U.2 adapter kit which is available separately is also supported on the X570 Phantom Gaming 4. The ASRock X570 Phantom Gaming 4 also uses a 10-phase power delivery with a single 8-pin 12 V ATX CPU power input, and also includes support for DDR4-4066 memory with four slots available and allowing for a maximum of 64 GB.

The rear panel includes a mid-range offering of connections including two USB 3.1 G2 Type-A, six USB 3.1 G1 Type-A ports, as well as a pair of video outputs consisting of a DisplayPort 1.2, and an HDMI output. There is no USB Type-C featured on this model, but there are an Intel I211-AT Gigabit Ethernet port and three 3.5 mm color coded audio jacks powered by a Realtek ALC1200 HD audio codec. Finishing off the rear panel is a PS/2 combo port, and three antenna ports on the IO shield itself due to the inclusion of an M.2 Key E 2230 slot for users to install their own wireless interface.

Overall the ASRock X570 Phantom Gaming 4 represents a more modest option with a Gigabit Ethernet port, a slightly cut down Realtek ALC1200 HD codec (compared to the ALC1220), and two full-length PCIe 4.0 slots. This model caters to the entry-level gamer with a price that is currently set at $155.