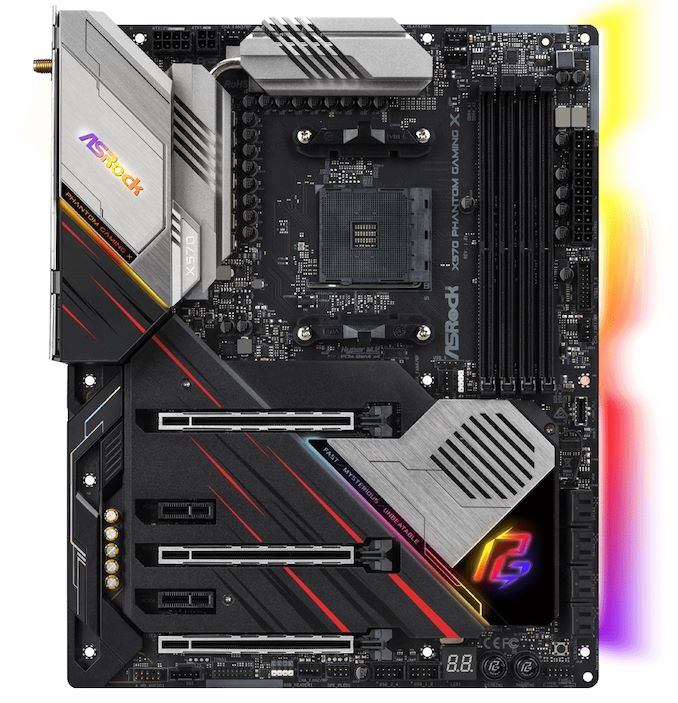 In between the three full-length PCIe 4.0 slots is two PCIe 4.0 x1 slots, with support for up to three-way AMD CrossFire, and two-way NVIDIA SLI multi-graphics card configurations. Memory support is also much improved for Ryzen 3000 with official support for up to DDR4-4666, with a total of four slots available for users; this model also supports up to 128 GB of system memory. ASRock's X570 Phantom Gaming X is also geared for enthusiasts with a 14-phase power delivery which uses an 8-pin, and 4-pin pairing of 12 V ATX CPU power inputs. On the rear is a steel PCB brace which adds support to the PCB, as well as extra weight. On the storage front, there are three PCIe 4.0 M.2 slots, eight SATA ports, and ASRock's U.2 kit which available separately is also supported.

The ASRock X570 Phantom Gaming X isn't as high-end as some of the other its new models such as the X570 Aqua, or X570 Creator, but gamers will find plenty of useful features to sink their teeth into. The ASRock X570 Phantom Gaming X has an MSRP of $350 and represents its flagship gaming model; a Realtek 2.5 G NIC and an Intel AX200 Wi-Fi 6 wireless interface add extra cost, but the board does lack a lot on the USB G2 connectivity on the rear panel, which is a little disappointing given the mid-range price tag.