The ASRock X570 Creator is geared towards content creators with a similar feature set to the flagship ASRock X570 Aqua, but without the focus on high-end aesthetics, and water cooling. The X570 Creator has a simplistic and elegant theme with silver heatsinks, with black contrast.

Its X570 heatsink is actively cooled, and incorporates an M.2 heatsink, with a standalone heatsink for the top slot; the top M.2 slot supports PCIe 4.0 x4 and SATA, while the bottom slot is geared for just PCIe 4.0 x4 drives. For SATA there are a total of eight ports. On the PCIe front, there are three full-length PCIe 4.0 slots which run at x16/x8/x8, and x8/x8/x4, as well as three PCIe 4.0 x1 slots. 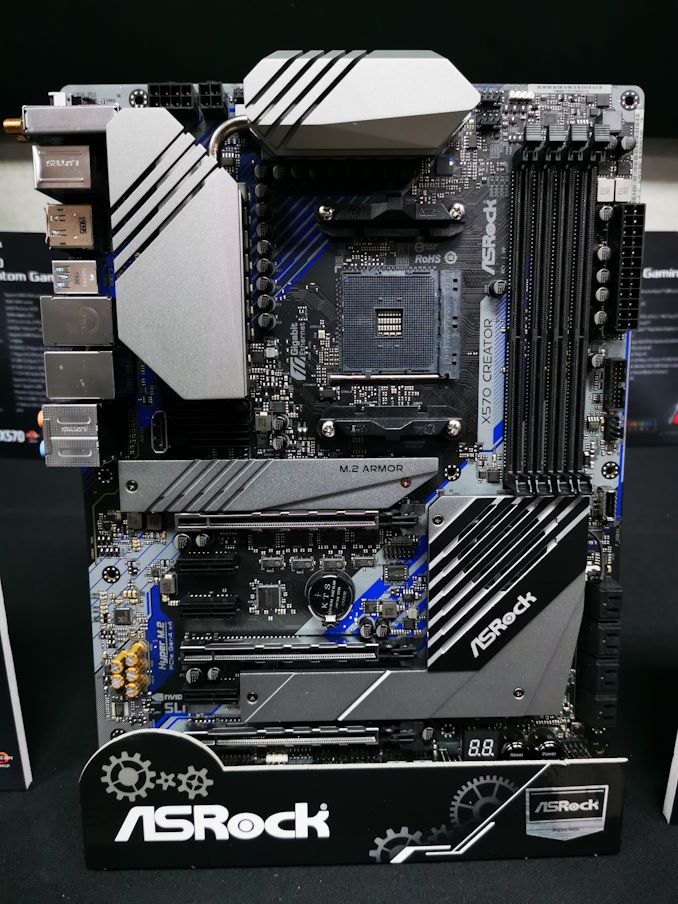 For memory, the ASRock X570 Creator has four slots with support for up to DDR4-4666 which remains to be seen if it will be effective or not in terms of performance. The X570 Creator also sports a 14-phase power delivery which is consistent with ASRock's other high-end offerings and has 8-pin plus 4-pin i12 V ATX CPU power inputs for delivering power to the processor. The feature set of the ASRock X570 Creator is similar to its other premium X570 models, but the main difference is primarily in the aesthetic. A cleaner, more professional look, without as much flash and pizazz. This mode has two PCIe 4.0 x4 M.2 slots, with a total of eight SATA ports with support for RAID 0, 1, and 10 arrays. A debug LED is located just below the X570 chipset heatsink, and next to these is an onboard power and reset switch.

With the ASRock X570 Creator being one of its more higher-end models, it has two rear panel Thunderbolt 3 Type-C ports. with an Aquantia AQC107 10 G LAN port, an Intel Gigabit port, Intel's AX200 802.11ax Wi-Fi 6 interface, and two USB 3.1 G2 Type-A, as well as four rear-panel USB 3.1 G1 Type-A. It also has two DisplayPorts with an input, and output, as well as one HDMI video output.

The ASRock X570 Creator comes in with an MSRP of $500 which for a premium feature set and everything on offer, it's not a bad price. There are other boards which cost slightly less with similar feature sets, but the Aquantia AQC107 10 G NIC, support for NVIDIA two-way SLI, and dual Thunderbolt 3 Type-C ports on the rear panel all add cost to the board.