Moving a step down the product stack from the X570 Aqua is the ASRock X570 Taichi which includes a new RGB inspired design, and shifts away from the usual black and white Taichi theme. While still targetted at premium users and enthusiasts, the ASRock X570 Taichi is representative of one of its most well-known lines which in previous generations has combined quality, performance, and a solid feature set at a reasonable price point. The ASRock X570 Taichi also uses its fabled signature cogwheel design across the board covers and integrates ARGB into multiple areas. 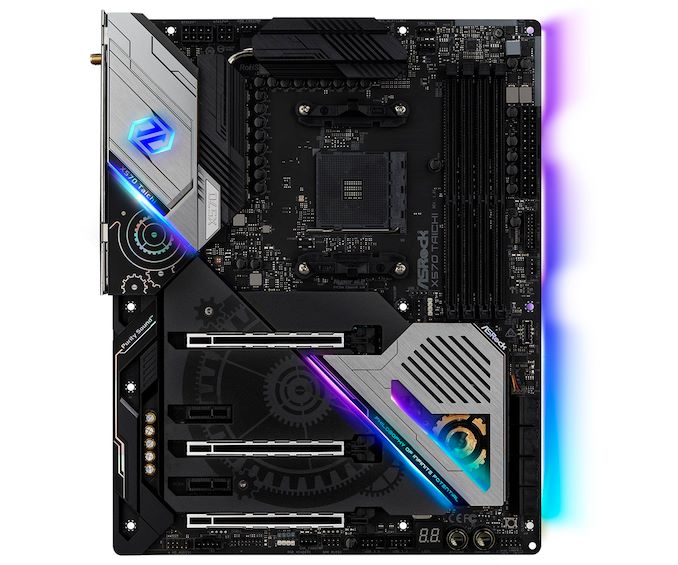 The ASRock X570 Taichi redefines the range and marks a change in aesthetics across the entirety of the board. On the majority of the board is its memorable cogwheel design is still a main element of the design but it now includes black heatsink armor around the PCIe slot area. The X570 chipset is actively cooled by a fan, mainly due to the X570 chipsets tendency to run warmer than previous generations. On the rear panel cover as with the chipset heatsink is ARGB for users looking to make a visual statement with their system. The X570 Taichi uses a 14-phase power delivery and has one 8-pin and one 4-pin 12 V CPU power inputs.

On the X570 Taichi is three full-length PCIe 4.0 slots operating at x16, x8/x8, and x8/x8/x4, with two PCIe 4.0 x1 slots. Underneath the heatsink armor is three PCIe 4.0 M.2 slots, while the board also supports up to eight SATA devices. For users looking for Thunderbolt connectivity, a Thunderbolt AIC 5-pin connector is present, but support is limited to ASRock's separately supplied AIC card. A total of four memory slots with support for DDR4-4666 are present, with a maximum supported capacity of up to 128 GB.

On the rear panel is a single Intel I211-AT Gigabit port, and also includes the new 802.11ax Killer AX1650 Wi-Fi 6 wireless adapter. There are three USB 3.1 G2 Type-A, a single USB 3.1 G2 Type-C, and four USB 3.1 G1 Type-A ports. An HDMI video output is present for users looking to use the integrated graphics on Ryzen APUs, while there's five 3.5 mm color coded audio jacks and S/PDIF optical output which is powered by a Realtek ALC1220 HD audio codec. For legacy users, a PS/2 combo port is featured, along with a BIOS Flashback button and a button to reset the CMOS.

The ASRock X570 Taichi has an MSRP of $300 and represents one of its most recognisable ranges for the last decade. Users looking for a mid-range option with plenty of features including triple PCIe 4.0 x4 M.2 slots, plenty of SATA, and solid power delivery will be hard pushed to find a better board in its price range.