Currently at the bottom of GIGABYE's gaming-focused product stack is the X570 Gaming X. With a slightly lesser 10+2 power delivery when compared to the X570 Aorus Elite with a 12+2, the X570 Gaming X includes a cheaper Realtek ALC887 audio codec, a Realtek RTL8111H Gigabit NIC, and two PCIe 4.0 x4 M.2 slots. On the boards PCB itself is a very funky and unique black and grey theme with triangle shaped accents which extends over the PCB onto the heatsinks. The X570 chipset heatsink includes a cooling fan, while the board has four memory slots with support for DDR4-4000 memory with up to 128 GB. 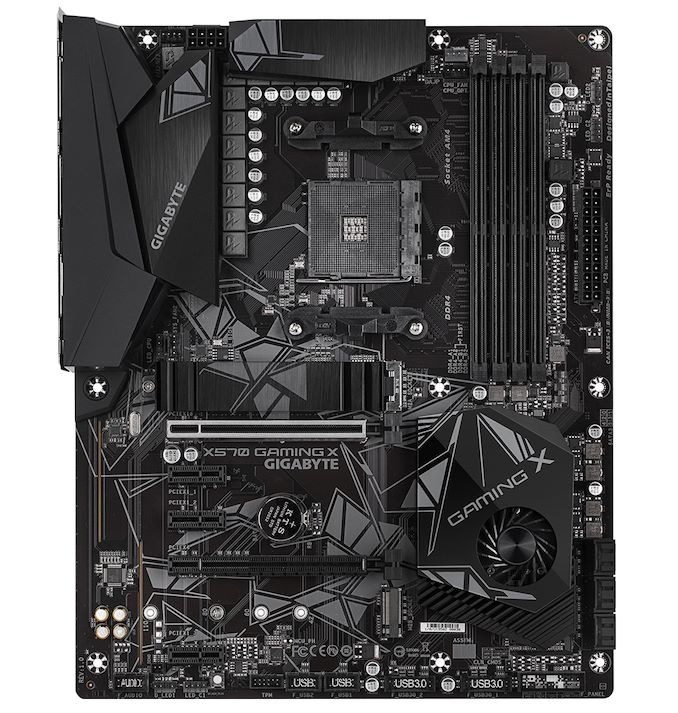 On the lower half of the GIGABYTE X570 Gaming X is two full-length PCIe 4.0 slots which run at x16 and x16/x4. The top slot takes its lanes from the CPU, while the bottom full-length slot is locked at x4 from the X570 chipset, while there are also three PCIe 4.0 x1 slots; this means up to two-way AMD CrossFire multi-graphics card configurations can be used. For storage, the X570 Gaming X has two PCIe 4.0 x4 M.2 slots with the top slot coming with a heatsink, and a total of six SATA ports capable of support RAID 0, 1, and 10 arrays. The X570 Gaming X uses a 10+2 power delivery which is driven by an ISL69147 PWM controller running at 5+2 and uses a single 8-pin 12 V ATX CPU power input to delivery power to the processor.

On the rear panel is a relatively basic set of input and outputs with no USB 3.1 G2 connectivity to speak of. What actually is there in terms of USB support is four USB 3.1 G1 Type-A and two USB 2.0 ports. There is a separate pair of PS/2 inputs for legacy keyboard and mice. Finishing off the rear panel on the GIGABYTE X570 Gaming X is a single HDMI video output for users looking to run a compatible Ryzen APU, three 3.5 mm audio jacks that are driven by a Realtek ALC887 HD audio codec, and a Realtek RTL8111H Gigabit controlled Ethernet port.

The GIGABYTE X570 Gaming X is its gaming inspired, but surprisingly natural looking entry model onto the X570 chipset. With an MSRP of $169, it sits as one of the cheapest X570 models at the launch of the Ryzen 3000 processors, and with a wallet-friendly feature set with everything needed to make use of PCIe 4.0, it's a viable option for entry-level users. The only glaring issue is that there is no USB 3.1 G2 ports at all on the rear panel, and other models from other vendors at the same entry-level price point does include some.