SiS has had a hard time trying to steal competition from Intel while playing catch up with VIA and NVIDIA. After trying the ultra-enthusiast route over the last 18 months with its FX and TX chipsets, it seems SiS's newest endeavor is to grab more of the IGP market. We have seen SiS's Mirage graphics before, but now it looks like we will see three more incarnations of Mirage in the upcoming year; both on Intel and AMD platforms.

SiS's Mirage2 and Mirage3 3DMark scores certainly look impressive, but we have seen this before. It is refreshing to think we will see true DX9 solutions from SiS, although it is unfortunate we will not see these offerings until next year. Although SiS has released information about Mirage, they have very little information concerning the new platforms it will run on - SiS670 (Intel) and SiS770 (AMD).

While we wait patiently for SiS to come up with solid evidence to back up their new Mirage chipsets, below you can check out a mapping of SiS's high end PCIe Intel offering; SiS656/SiS965. 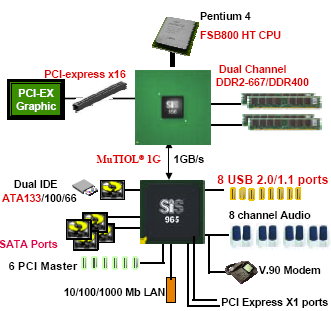 At first glance, SiS656 looks almost identical to ATI's RX400 offering (RX400 is basically RS400 without the Radeon 9600 IGP). Dual channel DDR2 and DDR with 1 PCI-Express x16 lane seem to be the standard for next generation Pentium chipsets. It was not clear as to whether SiS will support 1066MHz FSB, but if they only decide to adopt 800MHz FSB in their enthusiast chipset, ATI and Intel will find themselves with surprisingly little competition. Only NVIDIA appears to support the SATA-II interface in their upcoming chipsets. It does not appear as though the SiS656 is capable of SLI in either at x16+x8 or dual x8 PCIe configuration.

SiS continues to opt for its proprietary MuTIOL 1G north to south bridge capable of 1GB/s (this is roughly equivalent to a PCIe x4 interface). ATI and VIA both utilize PCIe interfaces from the north to south bridge, and NVIDIA, of course, does not incorporate a south bridge. SiS649, the mainstream Pentium platform, will debut identical to SiS656, but with single channel DDR2-533/DDR-400, and two fewer SATA ports.

With other SiS related news SiS's enthusiast AMD component, the SiS756, is one of the most bland chip offerings we have seen. 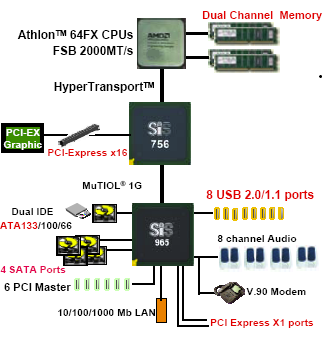 Since the same SiS965 southbridge is used in conjunction with the SiS656, and the memory controller is located on the Athlon64 processor, the SiS756 northbridge is really nothing more than a PCI-Express tunnel. The SiS756 operates at 2000MT/s while the existing SiS755 (which doesn't even act as a PCIe tunnel) operates at 1600MT/s. The newest revisions of the 755, dubbed 755FX operate at 2000MT/s and can utilize any existing southbridge without PCIe.