As ATI begins to distribute Non Disclosure Agreements for its upcoming core logic, we though we would fill in the blanks before too much information gets thrown under the carpet (until launch date that is).

The major advantage of RS400 over RS350 is the adoption of a real DirectX 9 IGP. Even though RS350 utilizes a Radeon 9100 Pro for IGP, it is still technically DX8.1. RS400 will integrate the Radeon 9600 Non-Pro GPU onboard, which should give Intel's 915G a run for its money. If ATI's roadmaps are to be trusted, this is a bit of a surprise for us. Our original roadmaps in April market RS480 to launch with DX8.1 instead of DX9. Unfortunately, graphics performance is only the secondary function of an IGP chipset, and thus the northbridge must be up to snuff. ATI's memory controller has been its downfall many times before in the past.

ATI originally claimed DDR2-667 support in time for the RS400 launch so we are in eager anticipation if ATI can deliver this expectation before Intel. Intel has moved its DDR2-667 deployment until Q1'05, but we have to take that deployment with a grain of salt; 925XE sampling starts next week and the next Intel chipset for release after that is scheduled for Q2'05.

One interesting development is the release of three separate RS400 chipsets; RS400 will continue to act as the dual channel high end solution. RC400 will act as the next step down, with only a single channel memory controller, and then RU400 will be the final low end model with a single channel memory controller and unified memory architecture for the IGP. All RS400 derivatives support DDR2 and DDR1, but no AGP ports. 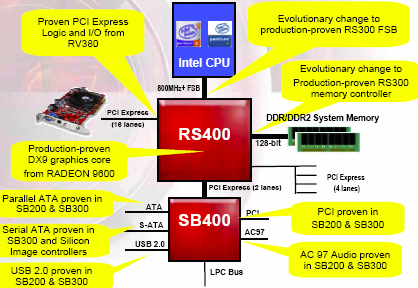 There are a few things to notice here; one thing have changed since our RS400 announcement several months ago. A-Link II has been replaced by two PCIe lanes so technically the RS400 northbridge is capable of 22 PCIe lanes (1 x16 and 4 x1 lanes). Also notice the lack of a next generation audio codec. Even though the Radeon 9600 is a significant upgrade AC'97 does not look very impressive next to Azalia, Envy and SoundStorm 2.

DDR2-667 is already hitting shelves; will ATI capitalize on their unique position to beat Intel (and perhaps SiS) first to market with official 667MHz memory support?