Seen as the holy child of DirectX12, Ashes of the Singularity (AoTS, or just Ashes) has been the first title to actively go explore as many of the DirectX12 features as it possibly can. Stardock, the developer behind the Nitrous engine which powers the game, has ensured that the real-time strategy title takes advantage of multiple cores and multiple graphics cards, in as many configurations as possible. 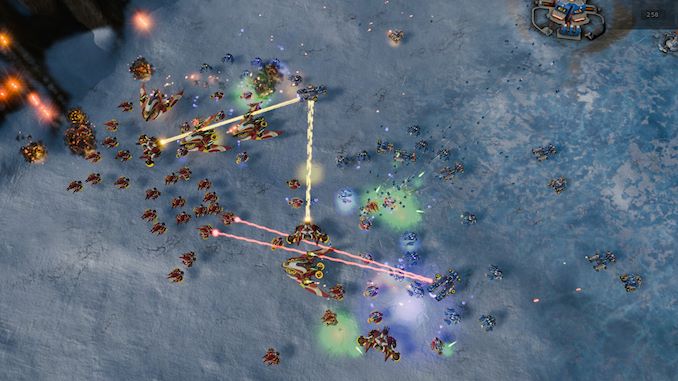 Stardock clearly understand the importance of an in-game benchmark, ensuring that such a tool was available and capable from day one, especially with all the additional DX12 features used and being able to characterize how they affected the title for the developer was important. The in-game benchmark performs a four minute fixed seed battle environment with a variety of shots, and outputs a vast amount of data to analyze.

For our benchmark, we run Ashes Classic: an older version of the game before the Escalation update. The reason for this is that this is easier to automate, without a splash screen, but still has a strong visual fidelity to test.

Ashes has dropdown options for MSAA, Light Quality, Object Quality, Shading Samples, Shadow Quality, Textures, and separate options for the terrain. There are several presents, from Very Low to Extreme: we run our benchmarks at the above settings, and take the frame-time output for our average and percentile numbers.

At the lowest resolutions, the 2500X has the high ground, but cedes it to the 8350K as the resolution ramps up.