One area where Microsoft consistently leads all other PC makers is in the display department. The Surface Go offers a 10-inch 1800x1200 display, which of course offers the same 3:2 aspect ratio as the rest of the Surface lineup, and the extra height makes for a better tablet experience, as well as some more vertical space for getting things done.

Even though the resolution isn’t as high as some of their other devices, the pixels-per-inch of the display are still reasonable at 216 ppi. It’s not the crispest display around, but it gets the job done without being a burden on the battery. 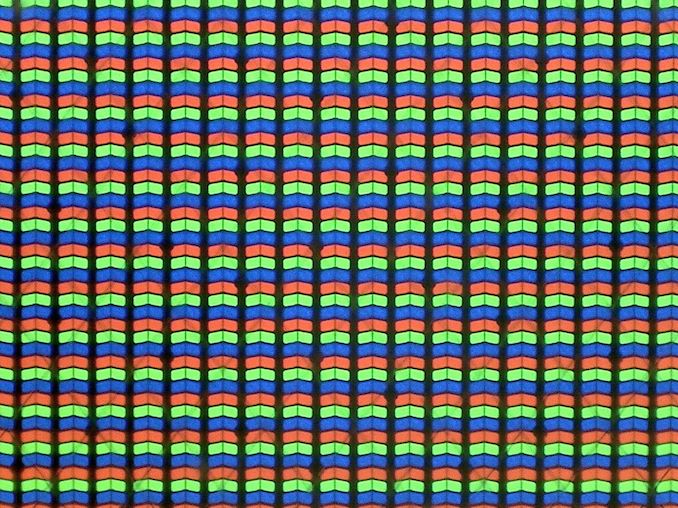 The Surface Go offers 10-point multitouch, and the display is compatible with the Surface Pen.

Microsoft is the one company in the PC space that color calibrates all its displays, and this trend started with the Surface 3 back in 2015. This is a nice benefit to all Surface customers, who can rest assured that anything they view on the display is going to be accurately portrayed.

If Microsoft was going to tackle the Next Big Thing on their displays, they should perhaps investigate better anti-reflective coatings, since they are still well behind Apple in this regard. Since the Surface Go focuses on mobility, being able to use it outdoors without as much glare would be a benefit.

To test the display, we use SpectraCal’s CalMAN software suite with a custom workflow, along with an X-Rite i1Display Pro colorimeter for brightness and contrast readings, and an X-Rite i1Pro2 spectrophotometer for color accuracy results. 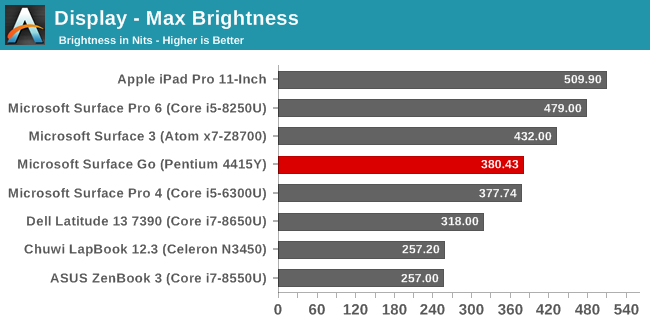 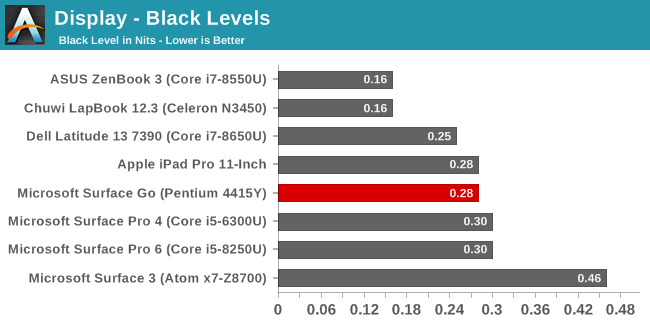 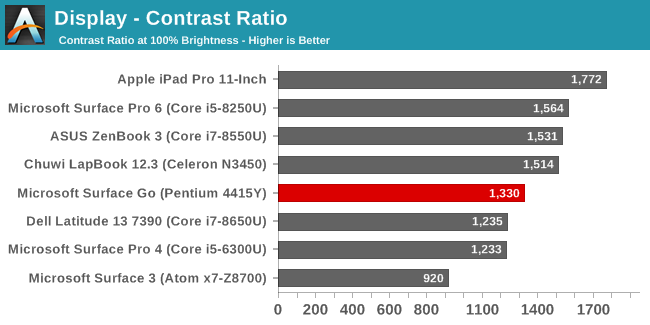 The display isn’t the brightest device around, at just 380 nits, but it does offer fantastic black levels and therefore good contrast. It’s not industry leading, but for a device that starts at $399, it’s quite good. For those that want to use it in the dark, it also goes all the way down to 6 nits so it should be easy to use in a very dark room without searing your eyeballs. 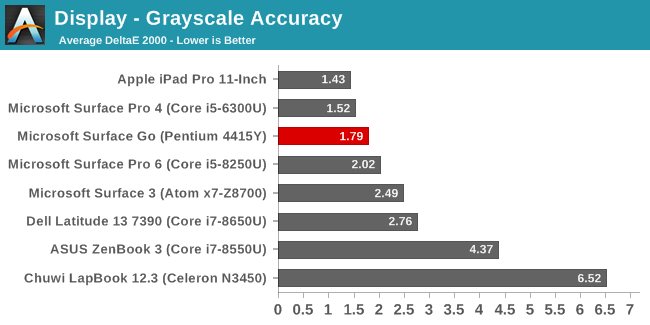 Overall, the grayscale results on the Surface Go are fantastic, with an average well under 2.0. There’s a couple of peaks that are just above 3.0, but the whites are more or less accurate. The color balance of the red, green, and blue, shows a slight drop in green, but this is well ahead of any other PC in its price range. Gamma is also quite good hitting the 2.2 average that is being targeted. 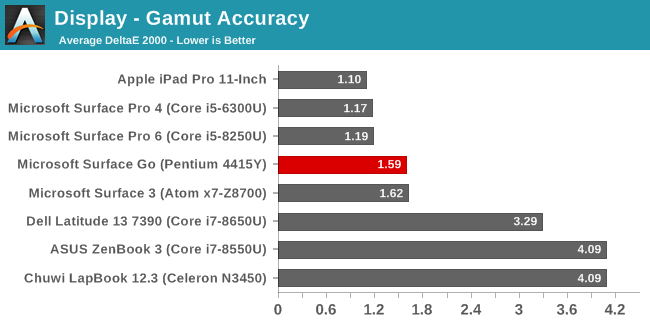 The Surface Go targets the sRGB gamut, and almost perfectly hits it. You would be hard pressed to find another PC with this level of sRGB accuracy for this price. One thing to note is that unlike the Surface Pro lineup, there’s no extra color profiles here to go with a more vivid color scheme, so you only get true sRGB. 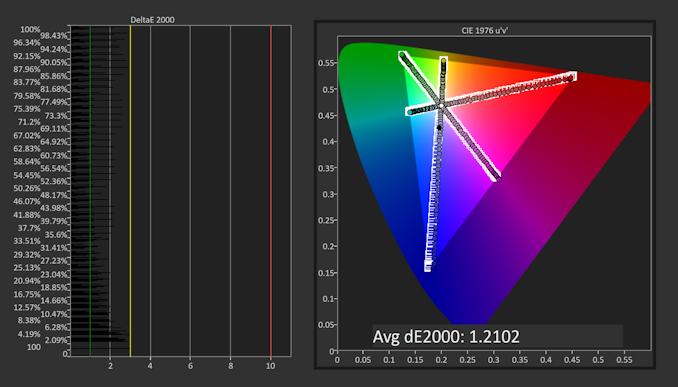 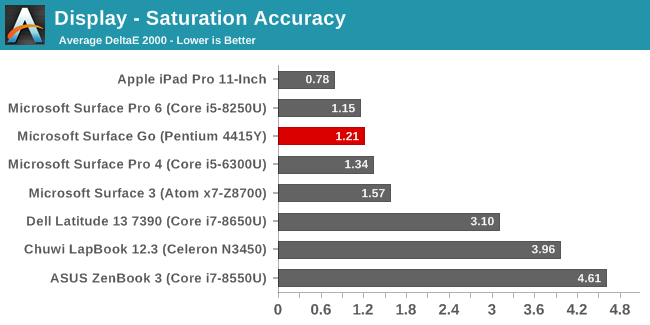 We do a full 4-bit step on the saturation sweeps of the primary and secondary colors, and the Surface Go is almost perfect here. Blue is slightly off the axis, but only just, and the average error level of 1.21 is a great result. 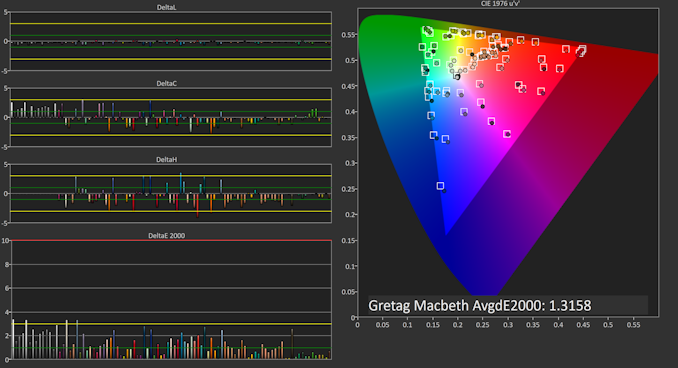 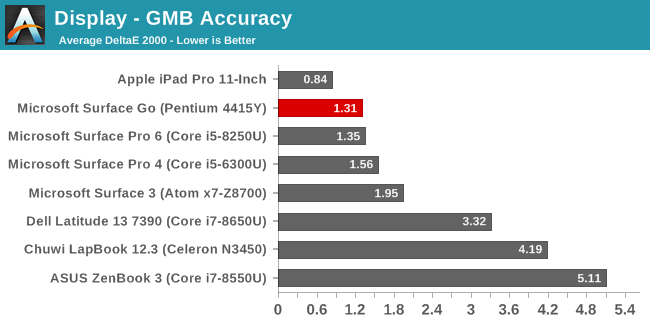 The Gretag Macbeth is the most comprehensive test, testing colors not only on the primary and secondary axis, but also colors in between, including the important skin tones. Here, a couple of color tests peak above 3.0, but the majority are close enough to the target color that the error would be almost imperceptible to the eye.

This image is a relative color comparator, with the target color on the bottom, and the measured color on the top. The Surface Go offers color accuracy that is second to none in this price range of the PC market.

Microsoft has done it again. The Surface lineup is the one true accurate display lineup in the PC industry, with the only other company doing color calibration across its product lineup being Apple. The Surface Go is likely not the place for Microsoft to start to compete against other technologies Apple leverages, but if we do see a redesigned Surface Pro in the future it would be nice to see them go after Apple’s other advantages, such as the 120 Hz variable refresh display in the iPad Pro, wide color support, or even just the anti-reflective coatings which Apple has a large lead with.

Still, for a PC that starts at $399, no other laptop or tablet running Windows comes close to the display accuracy of the Surface Go. The contrast is also good, and the pixel density is high enough that everything is sharp. The Surface Go keeps with the Surface tradition of offering a display that punches above its weight.