First up, we have the LeadTek GeForce 6800. As with most (all?) cards at this stage in the game, this is just a reference card with a LeadTek HSF solution strapped on it. Of course, cooling solution can play a large role in purchasing decisions, and as we saw in our previous generation round up, the LeadTek doesn't have a bad design at all. 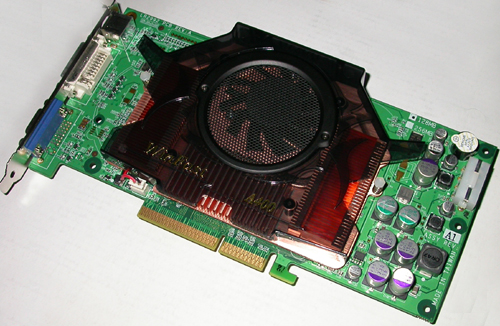 The core clock speed of the NVIDIA GeForce 6800 is 325, and memory is clocked at a relatively low 700MHz data rate, and it only has 128MB of RAM. Of course, the 400MHz drop in memory speed from its 16-pipe Ultra flavored big brother isn't as large a deal as it could be. The number of pixel pipelines running has a heavy impact on memory usage. Since this only has 12 pipes running at a lower clock speed, the slower (and cheaper) memory selection shouldn't have as large an impact as it might seem.

Next up is the eVGA GeForce 6800 Ultra Extreme Edition. These Extreme cards will simply be highly overclocked 6800 Ultra GPUs. NVIDIA suggests 450MHz+ core and 1.1GHz+ memory. Vendors who decide to pick up one of these overclockable GPUs can (and probably should) decide to go with faster memory as well. A beefy cooling solution is also desirable. Our digging and prodding suggests that NVIDIA doesn't charge any more or less for this chip to vendors (though they don't discuss at what price they will sell their chips), since it's still a 6800 Ultra GPU, but only some vendors will be able to get their hands on them. 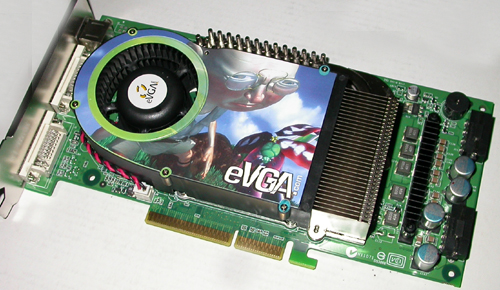 As we can see from the picture, this card is totally stock NVIDIA with the exception of the Tonberry image on the fan shroud rather than the mermaid. This particular 6800UE has a core clock speed of 450MHz and a memory data rate of 1.2GHz. We received our sample clocked at 460, but later received an update from eVGA that they would be shipping them at a lower speed. As we saw in our FarCry v1.2 patch article, this card was perfectly stable at 460 MHz, though mileage may vary.

We don't have any pricing information on the 6800 Ultra Extreme, but it will likely be very high as Ultras are going for $540 USD. We have been told by eVGA that the Ultra cards should retail for $500 while the Ultra Extremes should be $540, but vendors are simply selling the lower powered cards at a higher price right now. It remains to be seen what will happen with this, but price won't stabalize before availability does. For now, our greater concern is street price, which we estimate will be much higher than $540 (at least initially). But eVGA maintains that the card should be priced at $540 on their website when it becomes available. For that, we will have to wait and see.

Our comparisons will include plenty of ATI and NVIDIA current and previous generation cards.