While synthetic steady state workloads are one thing, real-world workloads are more transactional and their performance is determined not just by hardware, but as well by software. Here things like the CPU scheduler and OS APIs can have a big effect on the resulting perceived performance of a device. 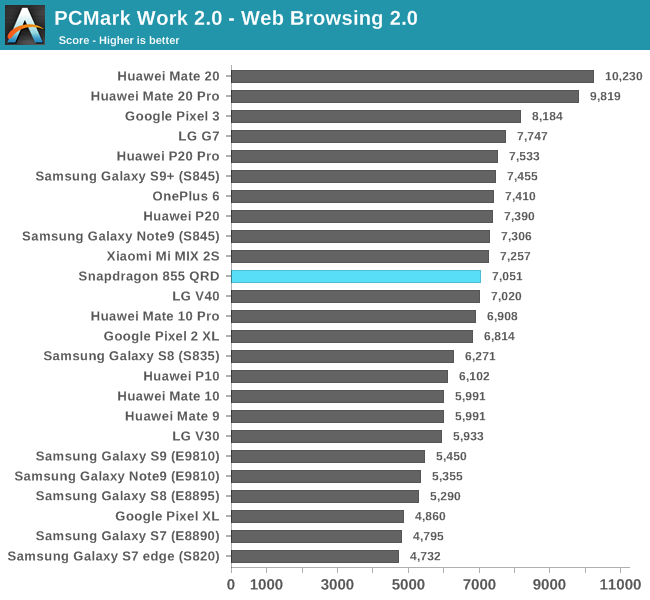 Starting off with PCMark’s Web Browsing 2.0 test, the Snapdragon 855 goes off to a bad start. Here for some reason the S855 QRD wasn’t able to distinguish itself from the lower end of Snapdragon 845 devices – here we had expected the phone to perform and compete similarly to the Kirin 980 in the Mate 20’s. 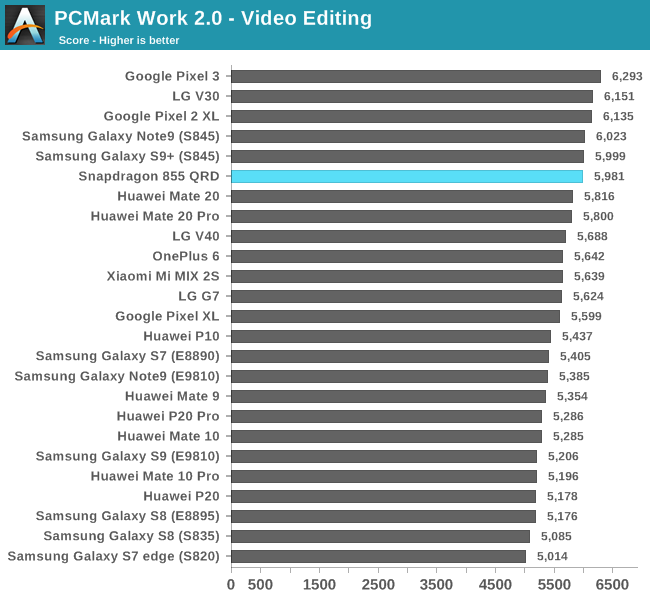 The video editing score is again also quite mediocre, but again the reason for this is that this test has largely reached a performance plateau where most of today’s devices no longer really showcase meaningful differences between each other. 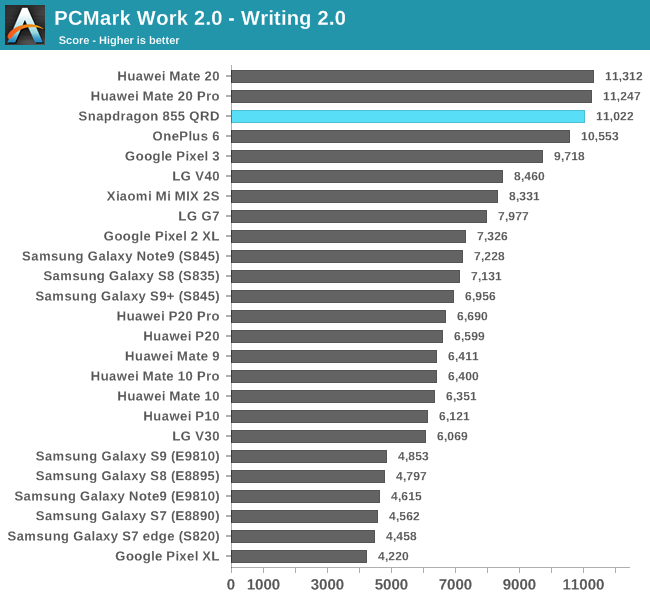 The writing sub-test is among one of the most important in PCMark, and luckily here the Snapdragon 855 QRD performed as expected as it’s within range of the Mate 20’s. 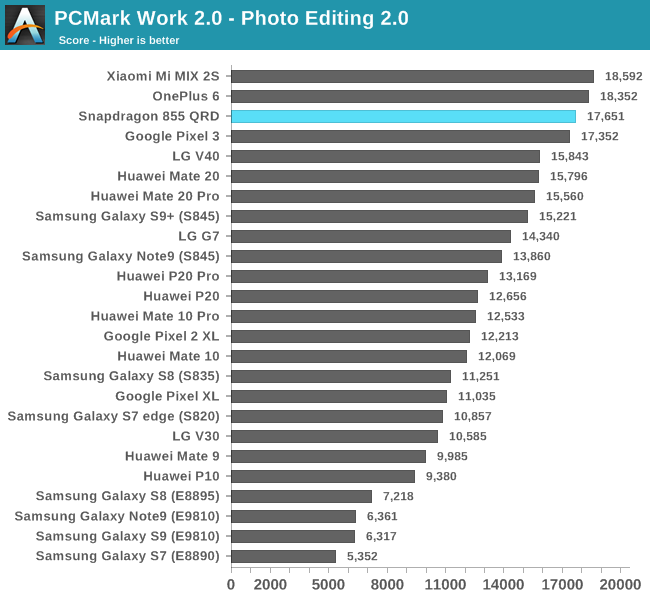 The photo editing sub-test is characterised by shorter heavy RenderScript workload bursts. The QRD performs well, although it’s within the results of the top Snapdragon 845 devices. 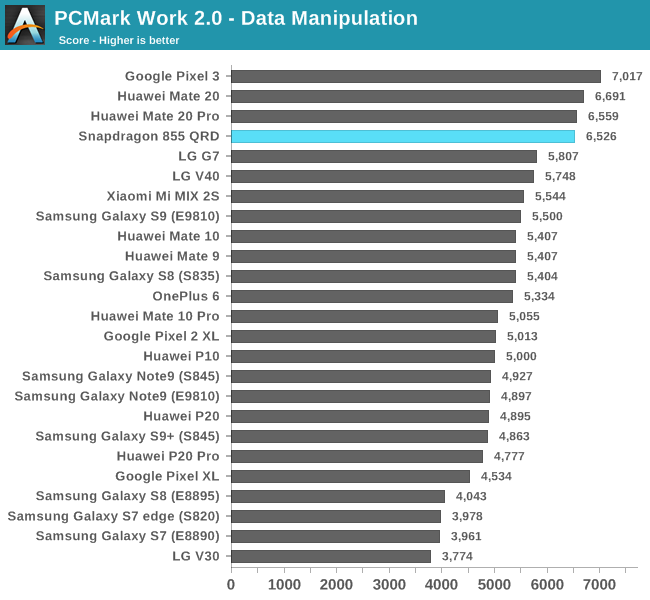 Finally in the data manipulation result which is more single-thread bound, we see the Snapdragon 855 perform well, but still remains neck-and-neck with the Kirin 980 devices as well as behind the Pixel 3’s very aggressive scheduler implementation. 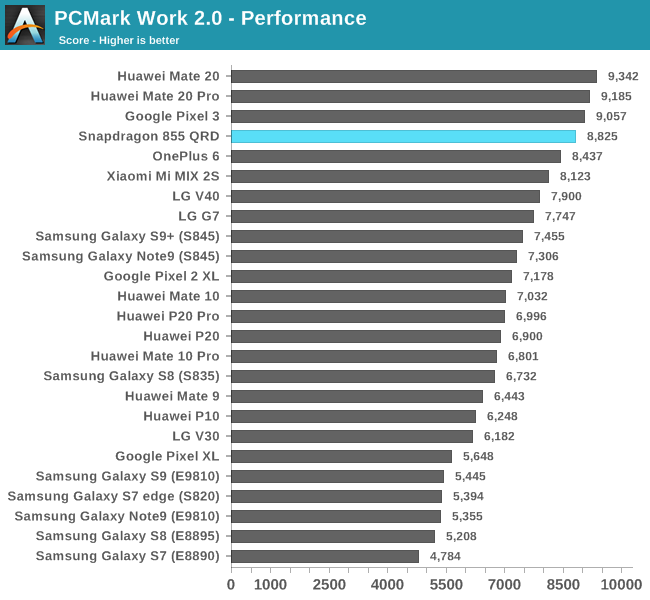 Overall, the Snapdragon 855 QRD in PCMark ended up among the top scorers, however I found the result to be a bit disappointing as it doesn’t appear to achieve a higher ranking than the Pixel 3, and Huawei’s Kirin 980 Mate 20’s are also ahead. 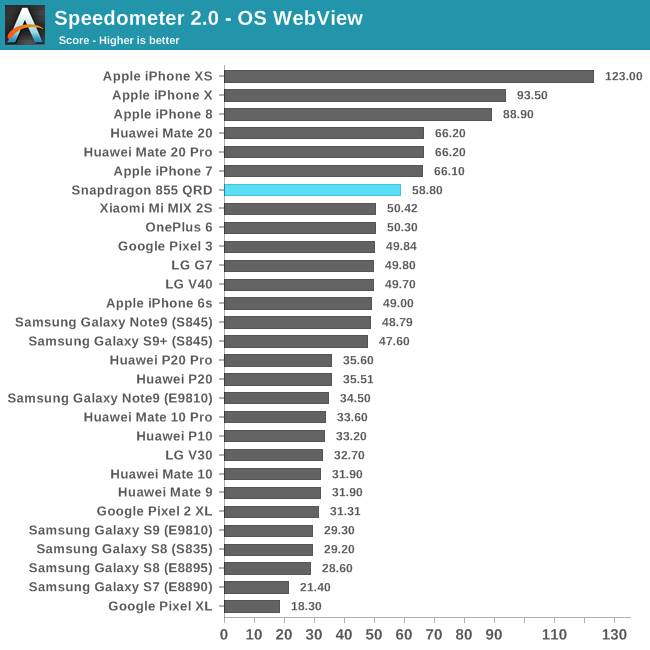 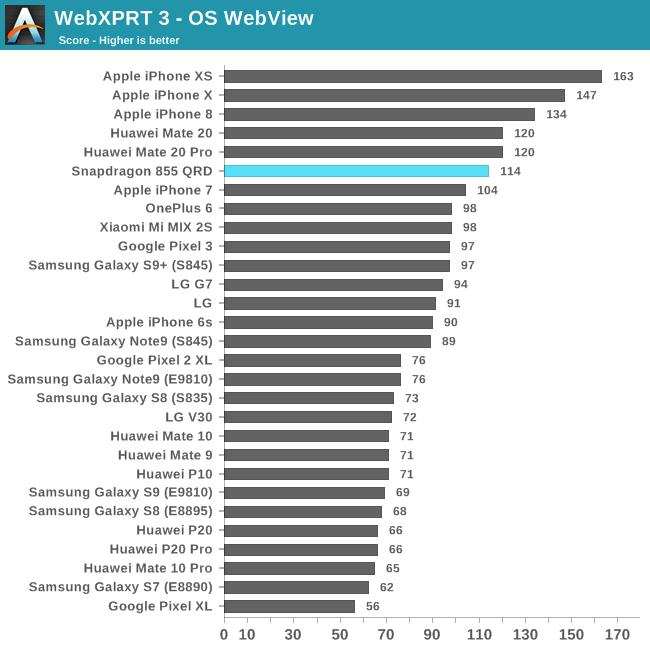 I’ve discussed the results with Qualcomm, and they were surprised to see the numbers end up like this. They stated that it’s something they will look into, and stated that it’s possible that the scheduler and software stack on commercial devices might improve performance. Something to be revisited once we get our hands on the first phones.

One of the newer kind of tests I introduced last year and has used in our review of the Apple iPhone XS is the scaling ramp test – here showcasing the improved DVFS responsivity of iOS12 across several generations of iPhones.

I’ve quickly ran this on the S855 QRD to be able to get a sense of the scheduler and DVFS mechanism: 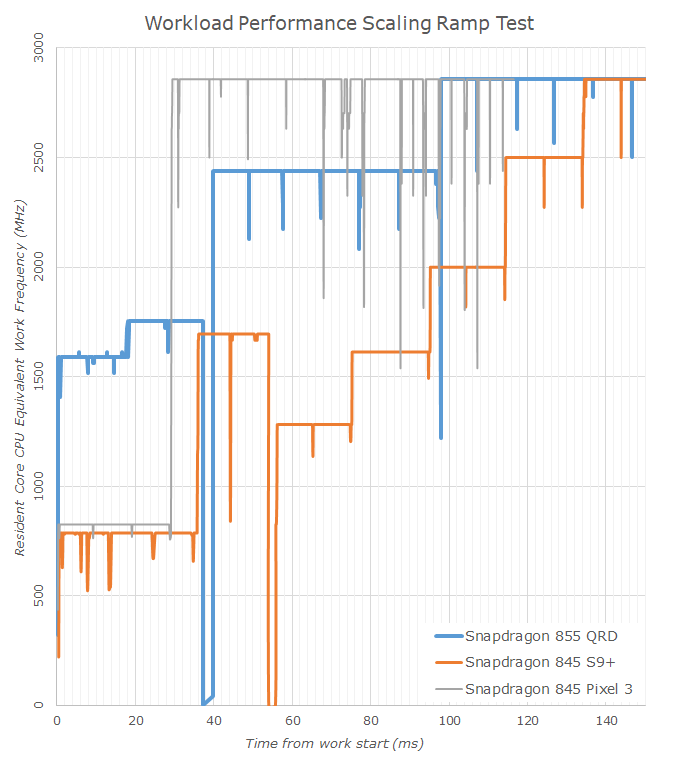 Here we see the Snapdragon 855 QRD being able to scale from a sleeping idle workload state to its maximum performance state in around 100ms. To compare this, I also showcase the scaling behaviour of the S845 in both the S9+ as well as the Pixel 3. The difference between the Pixel 3’s aggressive boost behaviour and the S9’s more step-wise frequency scaling showcases the best visual representation of the perceived responsiveness difference between the two devices.

The Snapdragon 855 here falls somewhere in-between both. It’s to be noted that the workload does get boosted to an “efficient” big core at 2.45GHz in around 40ms which is a very fast scaling behaviour. 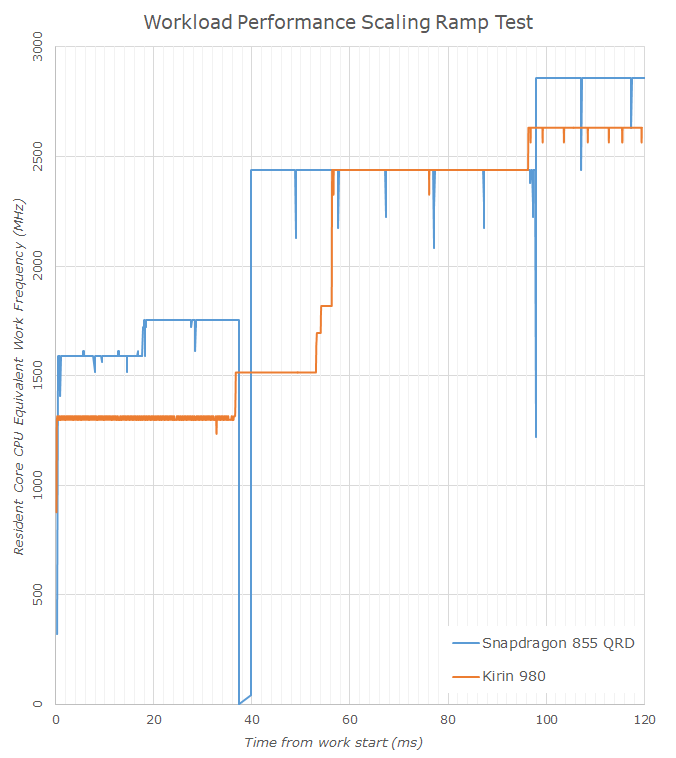 Comparing the Snapdragon 855 against the Kirin 980, we see that the Snapdragon isn’t any slower in reaching the maximum performance states. What is odd in these results is that the workload sees a significant pause of ~2.4ms when migrating over from the little cores, something that seems to affect only devices with Qualcomm’s custom scheduler. It’s an interesting find that I’ll have to investigate more.

Overall, real-world performance of the Snapdragon 855 is a bit lower than I had expected it to be. I’m not exactly sure what the cause here is; on the scheduler side we’ve verified that the workload doesn’t inherently scale slower than the Kirin 980. The only other explanation I could see is that we might be seeing some disadvantage of the smaller L3 cache or even the higher DRAM latency.

As we’ve seen in past Snapdragon performance previews, final commercial device performance is subject to change, and it’s possible the performance situation will be more tuned in actual shipping phones.