The queue depth 1 burst sequential read performance of the WD Black SN750 is faster than its predecessor, but there's still a lot of room for improvement relative to the fastest TLC SSDs and even the Corsair MP510 that relies on the same BiCS3 NAND as the SN750. 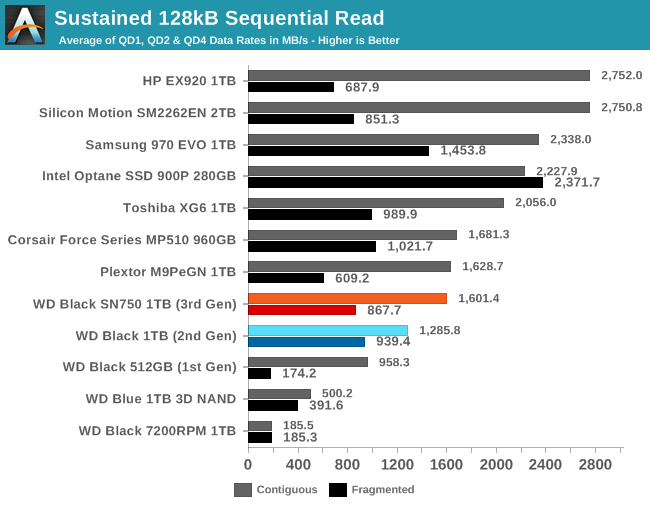 The performance of the WD Black SN750 on the longer sequential read test is a bit better than the previous model and more in line with other drives that use the same NAND, but still much slower than the top NVMe drives on this test. The performance when reading data that was not written to the drive sequentially has regressed slightly but is still decent for this class of drive.

Despite relatively low performance, the SN750 still manages to be tied for second place in the power efficiency ranking, scoring about 13% lower than the Toshiba XG6.

The WD Black SN750 suffers during the early stages of the sequential read test and doesn't hit its full read speed until the queue depth reaches about 16. The performance profile is very similar to last year's model save for a significant improvement at QD1. Several other drives also require fairly high queue depths to reach full speed, but most of the relevant competition has better low-QD performance than the WD Black. 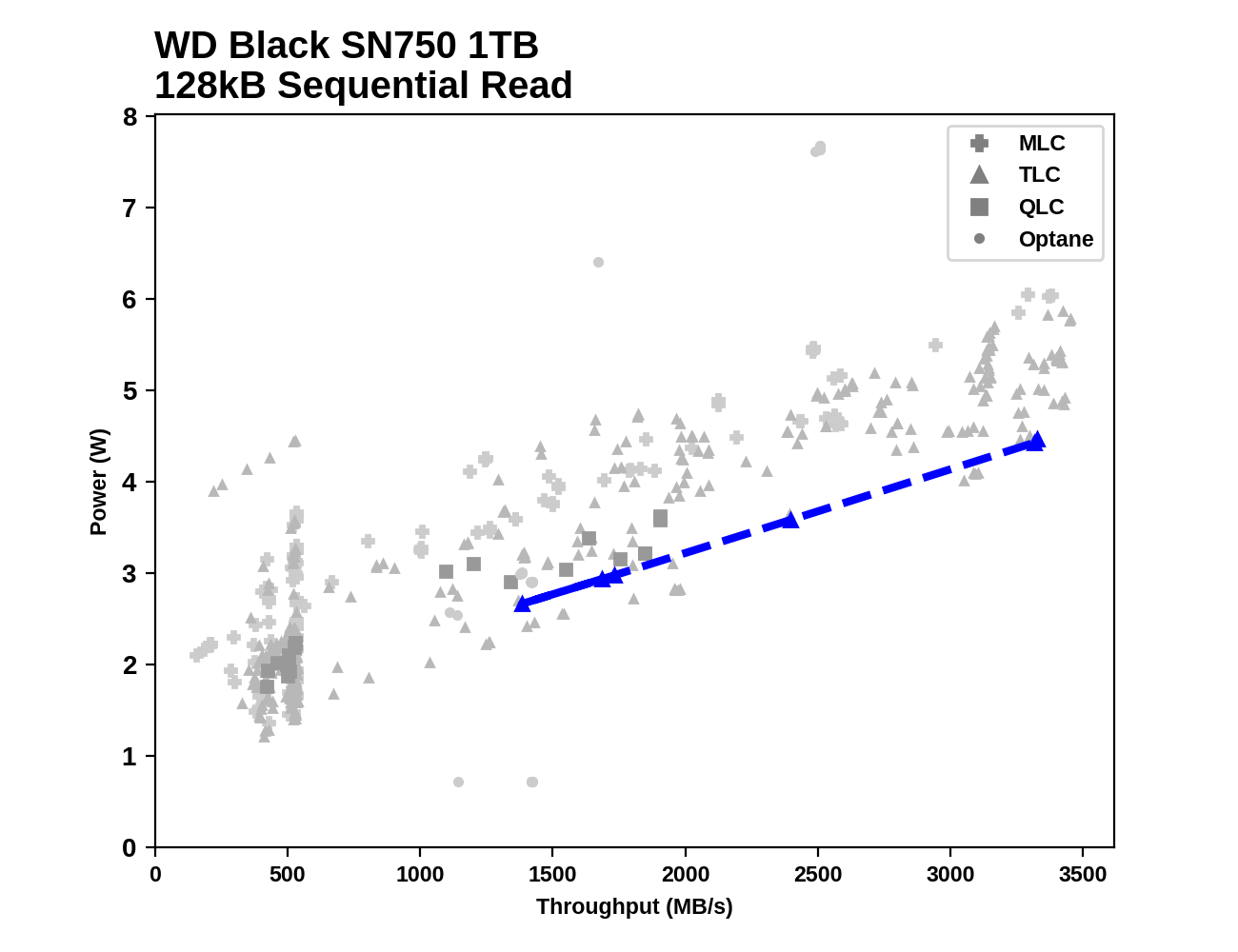 Even though the WD Black starts off slow, it still is fairly power efficient throughout the sequential read test and there are only few drives that offer better performance per Watt at any speed.

As with sequential reads, the QD1 burst sequential write performance of the WD Black SN750 is significantly improved over the previous model, and this time it gets relatively close to the top tier of drives.

The SN750 also improves slightly on the longer sequential write test that adds in some higher queue depths, bringing it up to the level of the Corsair MP510 but still a bit behind the Toshiba XG6 and well behind the fastest TLC-based competition.

The SN750 can't claim another efficiency win due to its performance that is merely average for this product segment, but the efficiency score is still pretty good.

The SN750's sequential write performance increases slightly from QD1 to QD2 and remains steady for the rest of the test. The top-performing SM2262EN sample doesn't hit full speed until QD4, at which point it is faster than the SN750 by almost 1GB/s. 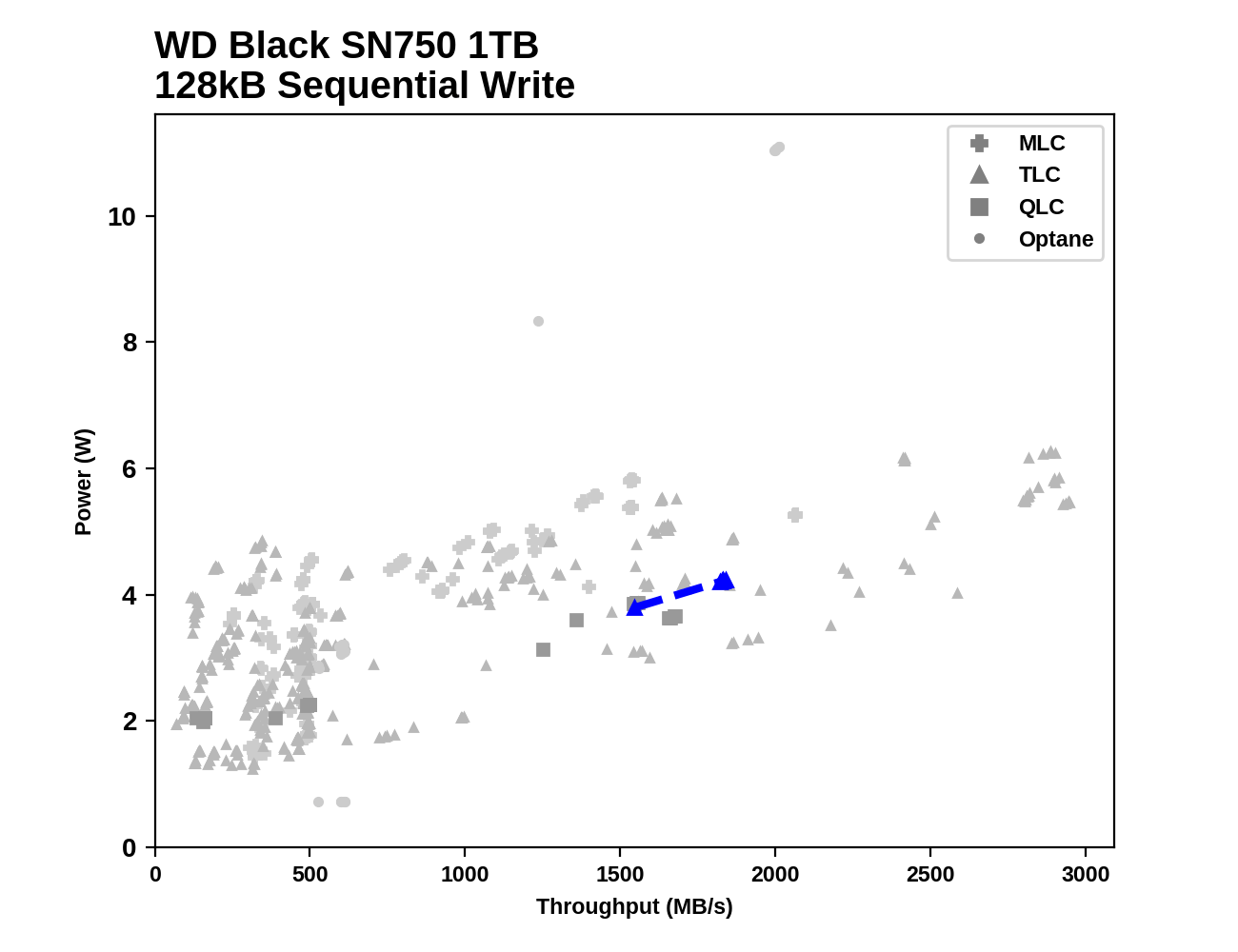 Among all the drives that have run through this test, the performance and power consumption of the SN750 both appear fairly middle of the road by NVMe standards; there are some drives that save almost 1W at the same speed, and a few that are far faster at similar power levels.