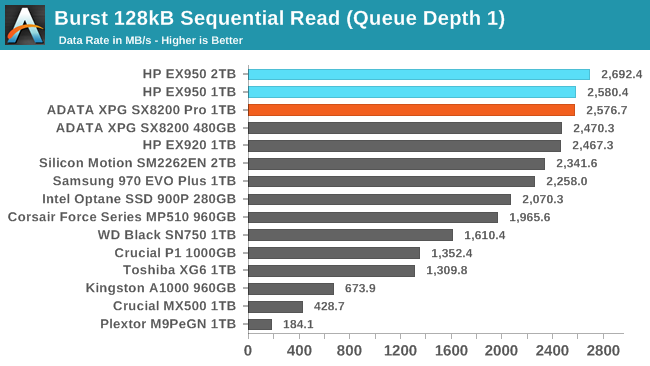 The retail SM2262EN drives offer the best QD1 sequential read performance, slightly faster than the earlier SM2262 drives and a clear improvement over the SM2262EN engineering sample we tested. 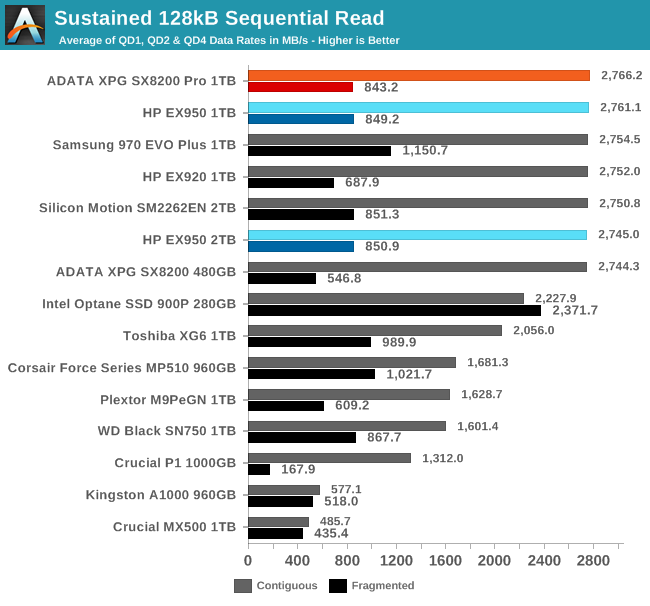 On the longer sequential read test that includes some higher queue depths, the SM262EN drives provide top tier performance, but the Samsung 970 EVO Plus has a clear advantage when reading data that was not originally written sequentially.

The power efficiency of the ADATA SX8200 Pro is second only to the Toshiba XG6 and slightly better than the Samsung 970 EVO Plus, though it and the other SM2262EN drives have subpar efficiency when reading fragmented data.

The retail SM2262EN drives hit their full sequential read speed at QD4 and hold steady through the rest of the test with the fastest read speeds we've measured from consumer SSDs. The Samsung 970 EVO Plus has about the same average at low queue depths thanks to better QD2 performance, but after that it takes until QD16 to reach its full speed. 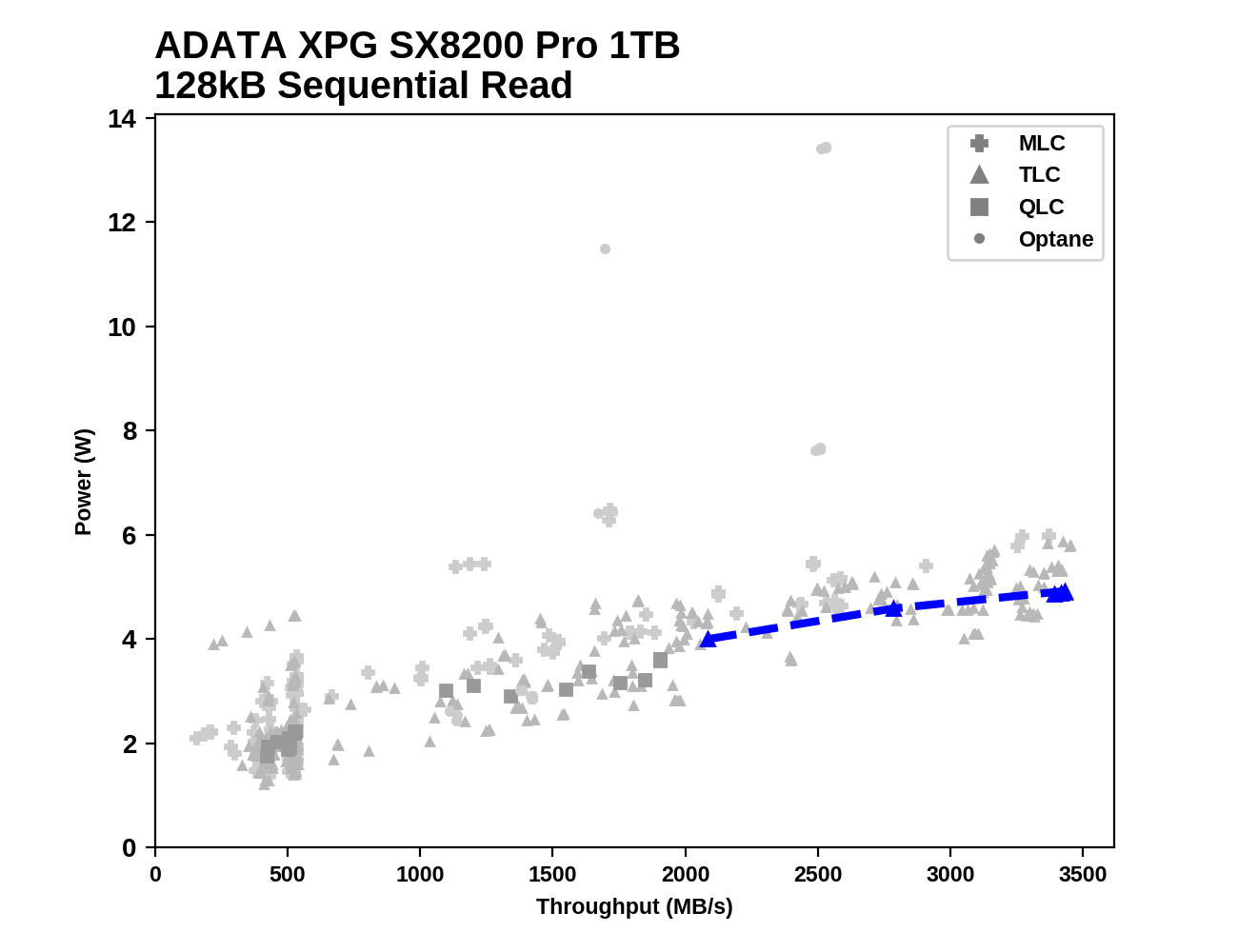 Almost all of the NVMe SSDs that deliver sequential read speeds of greater than 2GB/s require more power than the ADATA SX8200 Pro, and of the few that are more efficient, none can come as close to the PCIe 3 x4 throughput limit. 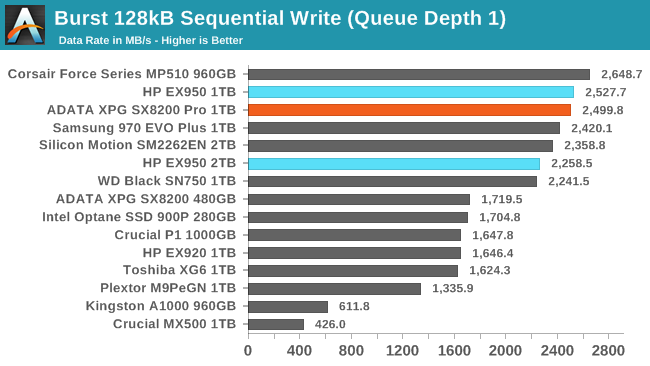 The QD1 burst sequential write performance of the SM2262EN drives is much better than the earlier SM2262 drives, but the improvement isn't enough to beat the Phison E12-based Corsair MP510. The 1TB HP EX950 and ADATA SX8200 are faster than the 2TB model, which is also a bit slower than the 2TB SM2262EN engineering sample was. 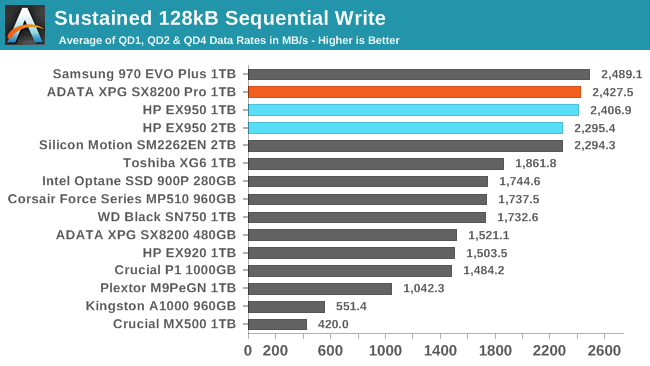 On the longer sequential write test that includes some higher queue depths, the Samsung 970 EVO Plus is the fastest, and the SM2262EN drives are the only competitors that come close. The 2TB EX950 is again slightly slower than the 1TB drives.

The 970 EVO Plus and Toshiba XG6 both deliver slightly better power efficiency on the sustained sequential write test than any of the SM2262EN drives. The ADATA SX8200 Pro continues to use less power than the HP EX950 of the same capacity, but the 2TB EX950 ends up with a comparable efficiency score to the ADATA due to being both slower and less power-hungry.

At QD2 the 1TB SM2262EN drives are very close to full sequential write performance, but the 2TB EX950 doesn't hit full speed until QD4. All three have steady performance through the higher queue depths, because this test doesn't come close to filling their large SLC caches. 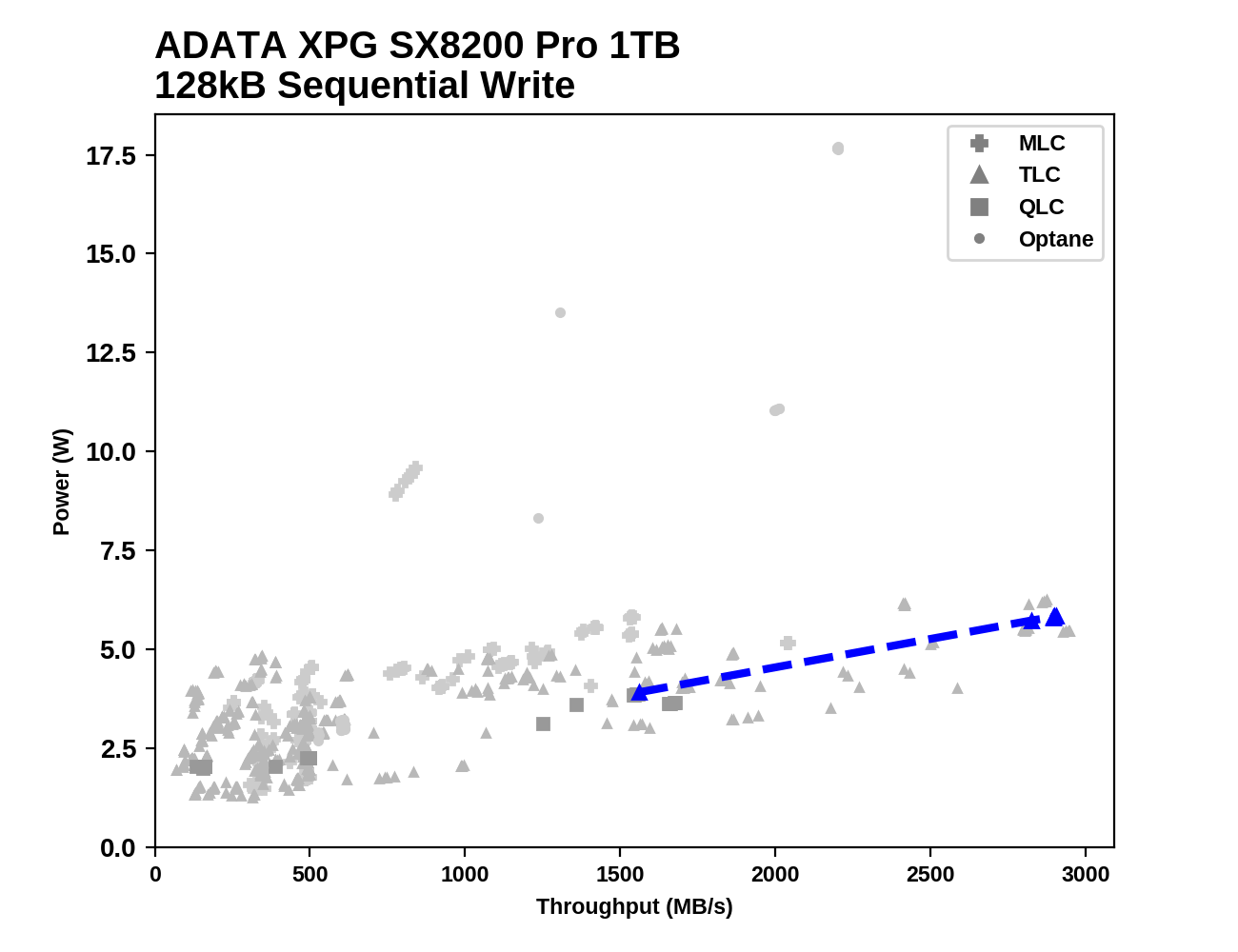 Compared against the entire database of test results, the power efficiency of the ADATA SX8200 Pro doesn't really stand out; of the relatively few SSDs that provide similar levels of performance, several require less power.