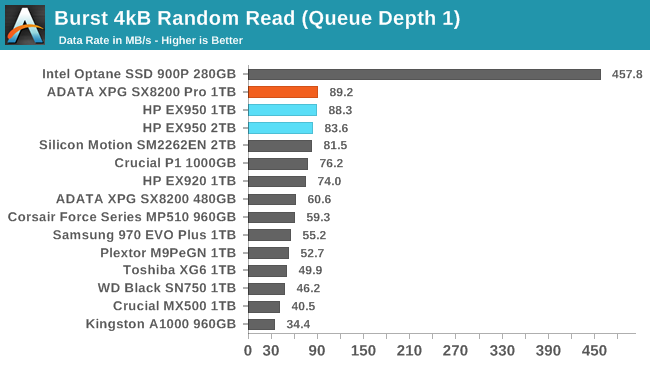 The combination of Silicon Motion NVMe controllers and IMFT 64L 3D NAND continues to provide the best QD1 random read performance available from mainstream SSDs. The retail SM2262EN drives are slightly faster than the engineering sample we tested last year, which itself was an improvement. The top spot among the flash-based SSDs we have tested now belongs to the ADATA SX8200 Pro. The 1TB HP EX950 is slightly faster than the 2TB model. 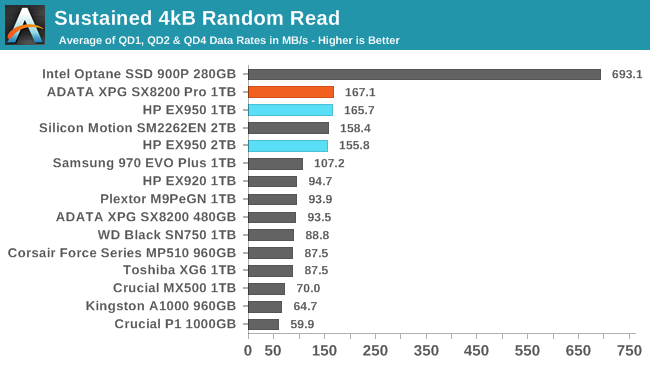 On the longer random read test that brings in some higher queue depths, the SM2262EN drives have a clear and substantial lead over the rest of the flash-based SSDs, including the SM2262-based EX920 and SX8200.

The ADATA SX8200 Pro takes a clear lead in the efficiency rankings for the random read test, while the EX950 is tied with the WD Black SN750 and Toshiba XG6. The SX8200 Pro averages about 0.6 W lower power draw during this test than the EX950, which is the most power-hungry flash SSD in this bunch.

The 1TB SX8200 Pro and EX950 perform identically at each queue depth, but the SX8200 Pro has a persistent power draw advantage. The 2TB EX950 draws slightly more power and delivers slightly less performance across the entire tested range of queue depths. Compared to the rest of their competition, the SM2262EN drives maintain a lead in random read performance at every queue depth, and are very close to catching up with the Optane SSD by QD32. 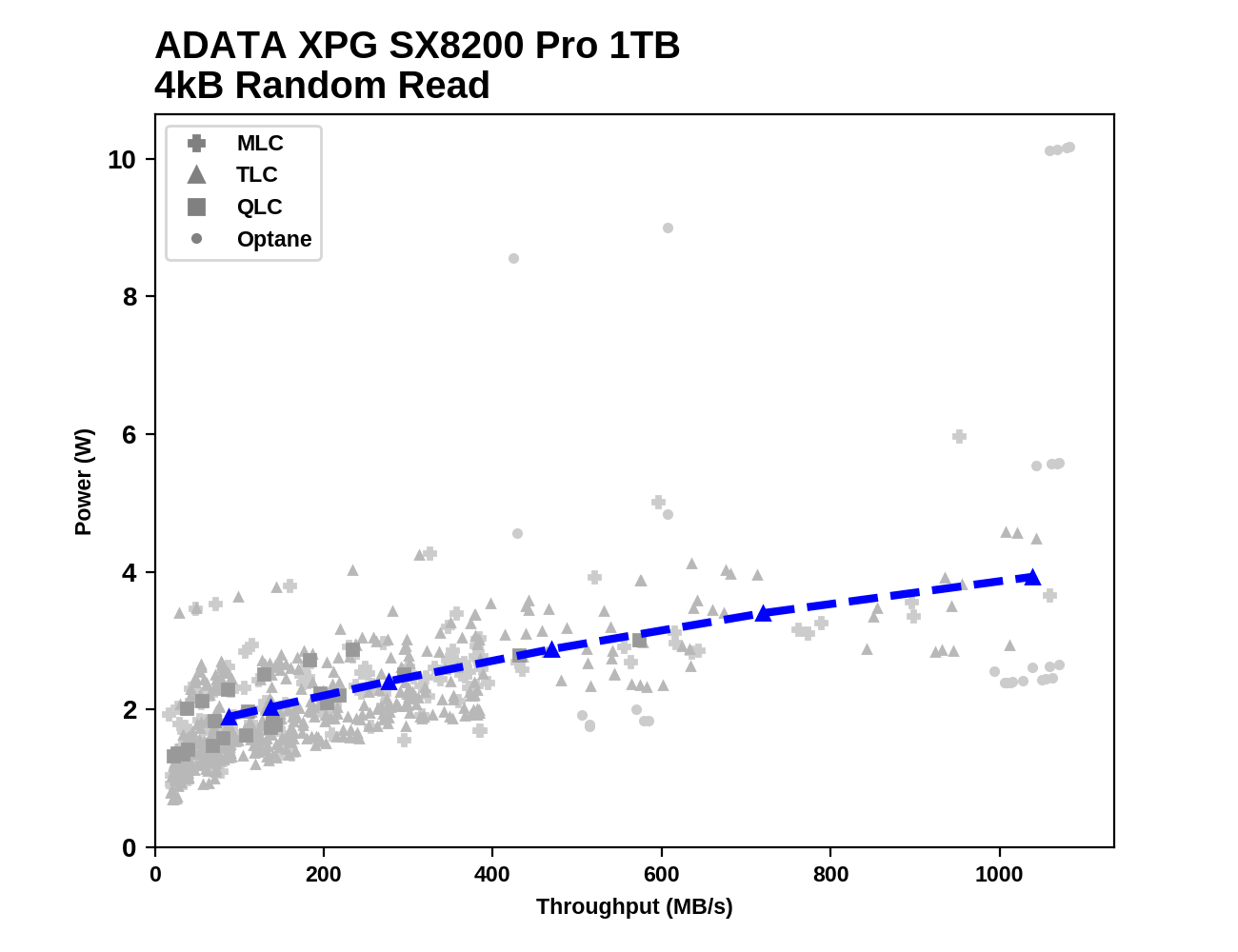 The ADATA SX8200 Pro may be quite efficient for low queue depth random reads compared to other NVMe SSDs, but when graphed against our entire database of results, it is clear that plenty of SATA SSDs deliver better performance per Watt at low speeds, and at higher speeds and queue depths there are some NVMe SSDs that offer similar performance with lower power consumption. 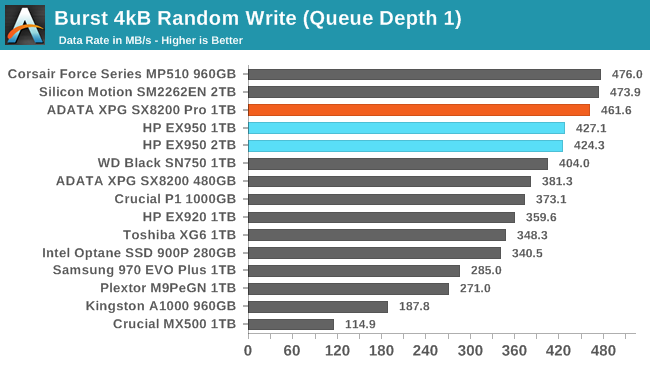 The burst random write performance of the retail SM2262EN drives is a bit lower than we got from the engineering sample we tested last year. The Phison E12-based Corsair Force MP510 is a few percent faster than the ADATA SX8200 Pro, and the HP EX950 is a bit slower but still faster than most other brands. 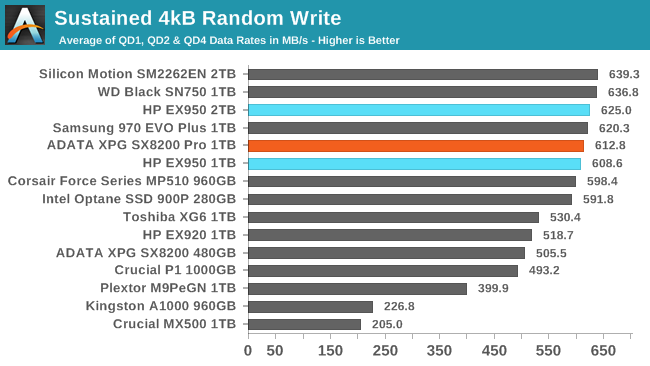 On the longer random write test that includes some higher queue depths, the SM2262EN drives stay near the top of the chart as the Corsair MP510 falls slightly behind and the WD Black SN750 and Samsung 970 EVO Plus catch up—but the overall spread among this top tier of drives is quite small. The 2TB HP EX950 is faster than the 1TB model but doesn't match the performance we got from the 2TB engineering sample.

The power efficiency of the ADATA SX8200 Pro on the random write test is very close to the Toshiba XG6 and WD Black SN750, and those three drives are clearly more efficient than the rest of this bunch, including the HP EX950.

The WD Black SN750 and Samsung 970 EVO both start out a bit slower than the SM2262EN drives at QD1, but they reach full performance at QD4 while the SMI drives take a bit longer to saturate and aren't quite as fast at high queue depths. 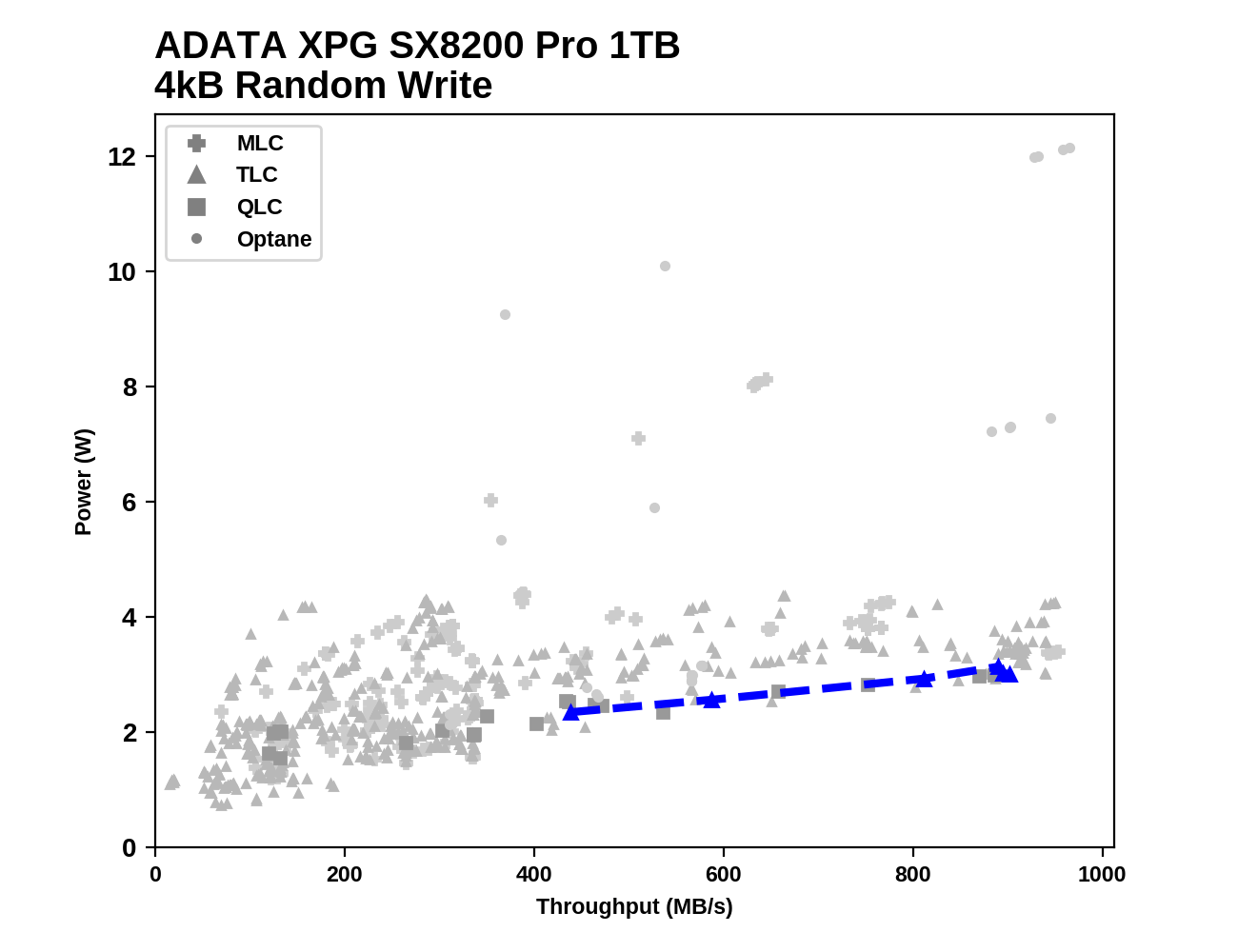 The ADATA SX8200 Pro may not be able to quite match the fastest TLC drives for random write throughput, but across the entire range of tested queue depths it provides excellent power efficiency that few drives can match.