The ADATA SX8200 Pro and HP EX950 largely behave as expected based on our testing last year of an engineering sample of Silicon Motion's reference design for the SM2262EN controller. SMI has drastically re-tuned the firmware to produce a very different performance profile from the original SM2262 produces. Peak performance has been improved, especially for write operations, so the SM2262EN products can be advertised with bigger numbers than their predecessors. Unfortunately, the tradeoffs mean that the new SM2262EN-based products are not as well-rounded as their predecessors; worst-case performance has gotten much worse, though the new drives always perform much better than mainstream SATA SSDs. 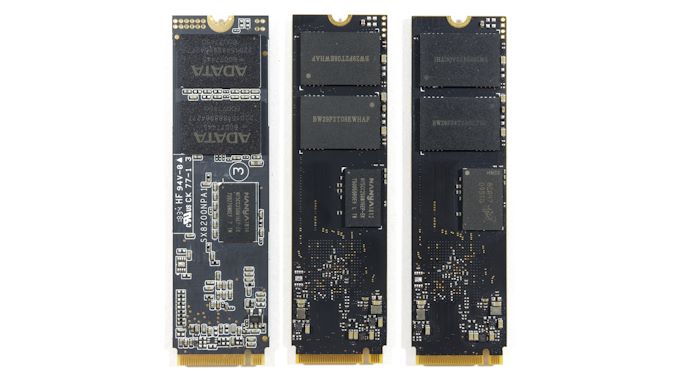 The general theme to the SM2262EN's optimizations seems to be to emphasize the SLC cache. These drives have the largest SLC write caches we've encountered, and their predecessors already had fairly generous cache sizes. When empty, the drives will use almost half of their NAND as SLC before writes start going straight to TLC, so peak write performance lasts for a long time even during sustained writes. The downside is that when the TLC portion of the drive fills up, there's a lot of background data shuffling required to reduce the size of the SLC cache toward its minimum. Once the drives are completely full and their SLC caches are at their smallest, performance usually ends up being worse than last year's products.

It is somewhat understandable that Silicon Motion would optimize for peak performance—client workloads are bursty by nature, and there are very few client workloads that resemble a long-running synthetic storage benchmark. Silicon Motion's customers - SSD vendors - have probably been asking for a controller solution that can let them advertise performance specifications that match or exceed the top drives from their competitors. Silicon Motion has delivered this, but in the process they've taken their optimization too far. The SM2262EN is essentially designed to offer the best possible scores on Crystal Disk Mark, with little concern for what happens to real-world performance.

The changes that the SM2262EN brings relative to the SM2262 are a net benefit to most real-world workloads, but that benefit is usually small enough to be basically imperceptible. The improvements definitely aren't worth the sacrifices made. Full-drive performance and long-term sustained writes are definitely corner cases when considering real-world use, but the point of a high-end NVMe SSD is to excel even in those tough scenarios. Light desktop usage doesn't really feel any different between a mainstream SATA SSD and an Intel Optane SSD, so premium SSDs have to earn their status by delivering better performance under adverse conditions. The SX8200 Pro and EX950 do improve performance on The Destroyer compared to the SX8200 and EX920, but they are still slower than all the competing high-end NVMe SSDs. On the rest of our tests, the new drives either improve performance where their predecessors were already plenty fast, or regress where SMI most needed to show improvement.

The ADATA SX8200 Pro and HP EX950 use the same major components and similar firmware, so it is no surprise that their performance is largely identical when comparing like capacities. Where they do differ significantly is in power consumption, and we haven't been able to figure out what causes such a big difference. The EX950's power efficiency is similar to earlier drives like the EX920 and the original SX8200. The SX8200 Pro however comes much closer to the better efficiency provided by the WD Black or Toshiba XG6, two of the few NVMe SSDs that have completely eliminated the power efficiency gap between NVMe and SATA SSDs.

Our testing of two capacities of the HP drive shows that the SM2262EN has difficulty dealing with 2TB of storage. On many tests, the 1TB EX950 is substantially faster than the 1TB EX920, but the 2TB model shows little improvement compared to the older EX920, or even underperforms the EX920. It's nice that SSD prices have made 2TB models more accessible and we're glad to see more vendors adding this capacity option, but the sweet spot is obviously still 1TB drives, for both performance and price per GB.

Be Mindful of Updates Coming in 2019

A lot of changes are underway in the SSD market: the new turnkey solutions from SMI and Phison are being rolled out. New 96-layer 3D NAND is starting to show up. Prices are still declining, though not as quickly as we saw in 2018. The new high-end NVMe SSDs that have hit the market in the past few months are for the most part fairly similar in real-world performance to their immediate predecessors, so the older models that are more readily available and often substantially cheaper are still very relevant.

In the second half of 2019 we will start seeing Phison E16 drives hit the market and we expect more options with 96L 3D NAND instead of 64L NAND, but in the near future the only new competitors we expect to see are more brands shipping SM2262EN or Phison E12 drives.

Some of last year's models are starting to disappear from the market, so the ADATA SX8200 Pro is already cheaper than the original SX8200. However, the most affordable high-end NVMe SSDs at almost every capacity are older models that have been leading the way for the past year's major price drops. The HP EX920 is still readily available and very cheap, with the 1TB model going for $160 compared to $220 for the new 1TB EX950, and the 512GB model also undercuts all the competition. At the 240/256GB capacity point, it's a toss-up between the Phison E12-based MyDigitalSSD BPX Pro and the SM2262-based Mushkin Pilot (due to be replaced with the SM2262EN-based Pilot-E soon).

An important part of the success of SM2262-based SSDs last year was that they were generally cheap enough that low-end NVMe drives with lesser controllers were basically shut out of the market, and the SM2262 drives were the logical next step up from a mainstream SATA SSD. That's not quite true for the SM2262EN drives yet (especially with SM2262 drives still available), but their pricing doesn't have to come down very far, since they are still better performers than low-end NVMe drives even at their worst. But now that Phison has a credible high-end NVMe controller shipping in volume, SM2262(EN) drives are facing serious competition at the same price points.