When Intel did a little demo at Computex 2018, with 28 cores all running at 5.0 GHz, we eventually found out that the system needed a 1700W water chiller to stay cool. Even at that point, people were wondering exactly how much power this CPU would put out. Then later in the year, Intel declared that the newly named Xeon W-3175X would be rated at 3.1 GHz for a 255W TDP. That makes it Intel’s highest TDP chip  for a non-server focused processor. Just don’t ignore the fact that it has a 3.8 GHz all-core turbo frequency, which will push that 255W TDP through the roof.

Speaking with Intel before this review, they gave us two numbers of ‘power limits’. Intel defines two power limits for this processor: the PL1 or ‘sustained’ power limit, at 255W, and a PL2 or ‘turbo’ power limit at 510W. Normally Intel sets the PL2 at only 25% higher, but this time around, it’s a full 100% higher. Ouch.

This is only a limit though – processors can (and have) run well below this power limit, so we actually need to do some testing.

As always with new Intel processors, we ask the company how the turbo ratios change as more cores are loaded. They used to give this information out freely, but in recent consumer launches no longer offer this info, despite it being available directly from the chip if you have one to put in a system. As a result, we have the following turbo values:

The top 4.3 GHz turbo frequency is 4.3 GHz, which within eight cores goes down to 4.0 GHz. That frequency is kept all the way until >24 cores are loaded, where it sits at 3.8 GHz. With these big chips, usually a system needs a few cores or all the cores, so expect to sit around 4.0-3.8 GHz most of the time.

Intel did give us all-core ratios for AVX2 and AVX512 as well, at 3.2 GHz and 2.8 GHz respectively, however the ASUS motherboard we used had other ideas, setting these values at 3.5 GHz and 3.4 GHz which it said was ‘Intel POR (specification)’.

If you want to read our discussion on what Intel’s TDP values actually mean, here’s a handy guide we wrote late last year.

The ASUS BIOS: The Key to Power and Overclocking

One of the issues stemming from last year’s high-powered CPU reviews was the matter of Intel specifications. Simply put, while Intel has a list of suggested values for certain settings, motherboard manufacturers can (and often) do what they want for consumer systems, including lots of turbo, higher power consumption, and higher-than-expected defaults. Motherboard vendor features like Multi-Core Acceleration and Multi-Core Turbo are sometimes put at default, making testing a chip all the more tricky – should we test out of the box performance, or Intel specification performance (which isn’t always fixed anyway)? 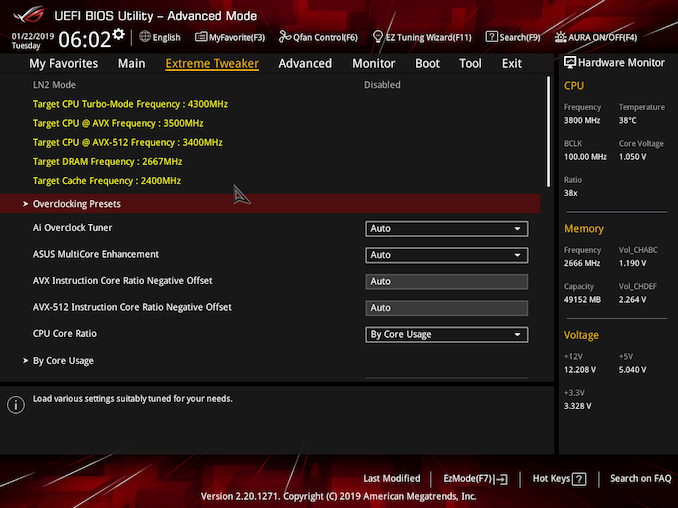 For this new platform, ASUS has made it simpler, yet more confusing. They are still using the Multi-Core Enhancement option in their BIOS, or MCE for short, however the way it works has changed.

It offers two modes: Disabled, or Auto. When in Disabled mode, it puts all the options in ‘Intel POR’ mode, or Intel’s recommended settings. This includes voltages, frequencies, current limits, and removes all of ASUS’ independent tweaks for stability and performance. When in Auto mode, it opens up the power limits and the current limits, and sets the system up for overclocking. It doesn’t actually change any of the frequencies of the system, but just opens a few doors.

We spoke with Intel about this. They said ‘we recommend Intel specifications’, however despite this the company sent me this system with ASUS’ additional tweaks and geared for overclocking. If that isn’t confusing, I don’t know what is.

The first change gives the CPU some headroom before the system thermally throttles. Most Intel CPUs have a temperature limit of 95ºC, however this chip has a limit of 120ºC, so this can make a lot of sense, especially as a system ages and dust gets everywhere, reducing performance.

The second change might seem a little odd. Why does the reported current need changing? The issue here is that for the firmware, the underlying Intel system is relying on some older reporting code when dealing with current limits. In order for this high current processor to not be automatically throttled by this code, a divider is put in place.

Intel’s ‘recommended’ divider is 1.28, however ASUS’ tweaked setting puts this divider at 4, which opens up some headroom for overclocking. One of the downsides to this is that it causes confusion for any software that reports power numbers, such as Intel’s Power Gadget and AIDA64. (AI Suite automatically corrects for this.) ASUS states that when the setting is at 4, the actual power value reported by the processor is 2.25x the value it gives. Thus if the processor says 100W, it is actually drawing 225W. This corrective factor has been made in all our subsequent graphs.

So here we go into actual hard power numbers. For this test we run our affinity scaling script to test the power consumption as we increase the threads. We’re using MCE enabled here, which doesn’t affect frequency but should allow for a full turbo, as we normally see on consumer processors. 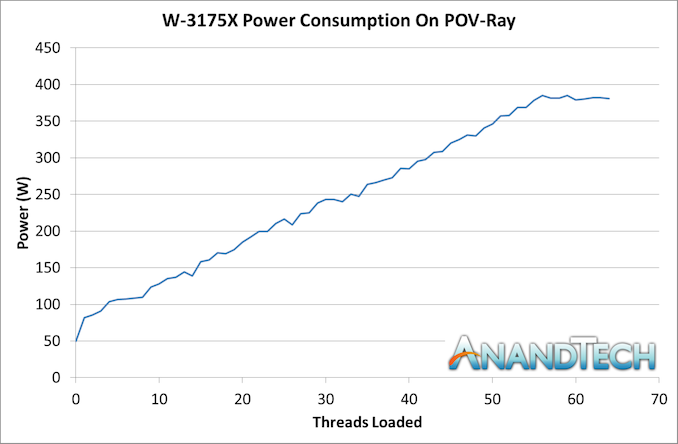 At full all-core frequency in that higher power mode, we don’t reach 510W, but we certainly go well beyond 255W, scoring about 380W maximum. If we apply this to the Intel Spec version, and compare to other CPUs, we get the following: 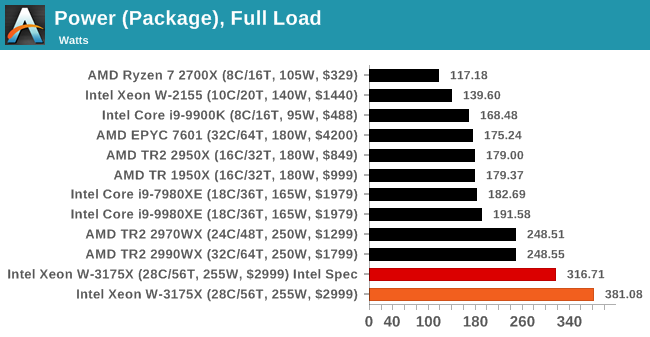 Overall, that’s a lot of power. But that’s what we expected, right? The cooling used on this system has an apparent rating of 500W, so we’re just about happy with that.

So how do you push the limits on a system where the limits are already being pushed? Easy, push harder – as long as you don’t break it.

We haven’t had time for a full run of our benchmark suite in overclocked mode yet, however we were able to record some results and some power values. They key parts to chips like this is how we manage AVX2 and AVX512 ratios – normally users just set an ‘all-core turbo’ to some value as an overclock, but for this chip the AVX ratios need to be systematically lower in order to keep the system stable based on how much extra current they need.

So starting with MCE enabled to open up the power limits, the current limits, and the temperature limits, I probed the standard all-core turbo and the AVX2 turbo separately. In each instance, I didn’t change any setting other than the CPU multiplier, and increased the values. When the system booted, I ran Cinebench R15 for non-AVX and POV-Ray for AVX2, using Intel’s power gadget to take both power, frequency, and temperature values.

Starting with non-AVX testing, I raised the frequency from 4.0 GHz up to 4.4 GHz. The benchmark result scaled from stock frequencies up to 4.3 GHz, however it was clear that we were hitting thermal limits as the sensor was reading 110ºC, which felt really uncomfortable. Here are the power traces for those tests, along with the score: 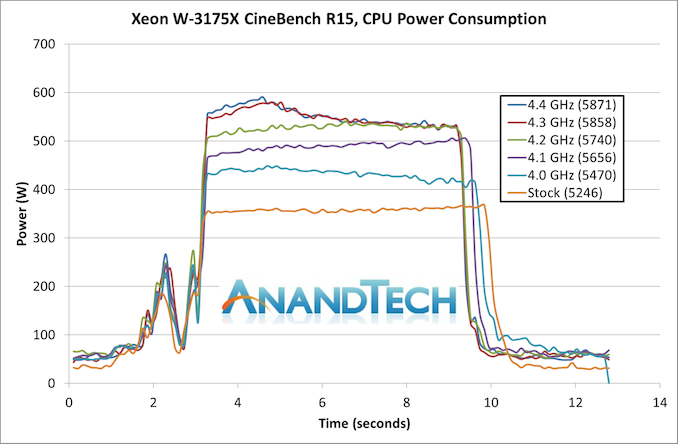 At 4.3 GHz, we were hitting almost 600W peak load (confirmed by wall meter), which is the limit of the cooling setup provided. Compared to the 4.0 GHz result, we calculated that the CPU actually used 17% more power overall to get a 7% increase in performance.

With AVX2, we started much lower, at 3.6 GHz, again raising the frequency by 100 MHz at a time and recording the POV-Ray run with our software tools. 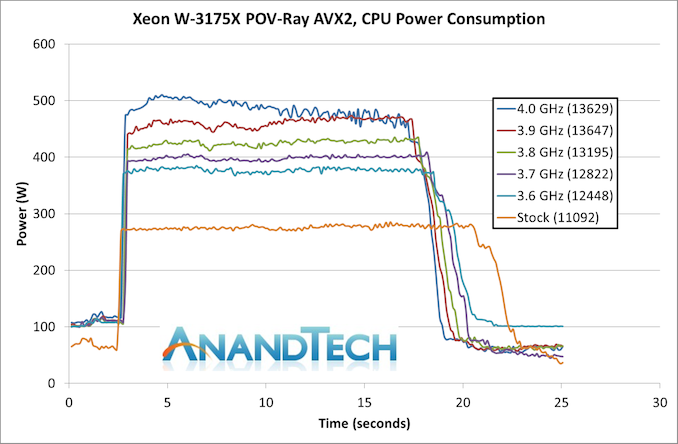 Here the power is overall a bit lower, but we can see that the score isn’t rising much at 4.0 GHz, again due to our CPU temperature sensor showing 110ºC very easily. In this instance, the power consumption between 3.9 GHz and 3.6 GHz increased by 14%, while the score rose 10%.

Intel sent an EKWB Phoenix cooler which is rated for much higher power consumption, but arrived too late for our testing. We’re planning on doing an overclocking review, so this should help. But what our results show is that when Intel showed that 5.0 GHz demonstration using a water chiller they really did need it. Users might look into investing in one themselves if they want this chip.

But What About That 5.0 GHz? How Much Power?

We took some of our benchmark values for power and frequency, extrapolated them with a power curve, and we estimate that at 5.0 GHz, this chip is likely to be drawing in excess of 900W, perhaps as high as 1200W. Yes, Intel really did need that 1700W water chiller.