For a wireless solution, Lenovo utilizes the Realtek 8822BE card which is not one we see very often. It’s a typical 2x2:2 configuration with 802.11ac, and a maximum connection speed of 867 Mbps. 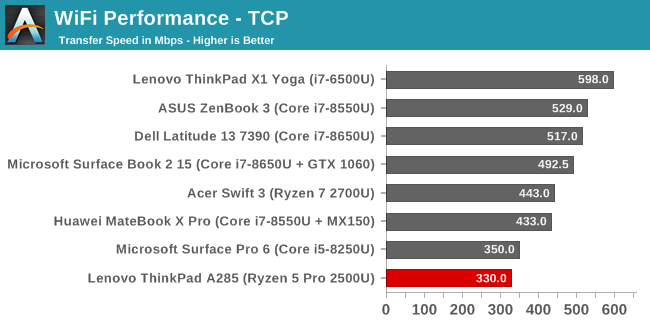 The results aren’t pretty. There are good wireless adapters available, and Lenovo often uses them, but this Realtek is not one of those. On a positive note, it was at least very stable during testing, with no disconnections or lost Wi-Fi like we do see on some of the competition. It just isn’t quick. 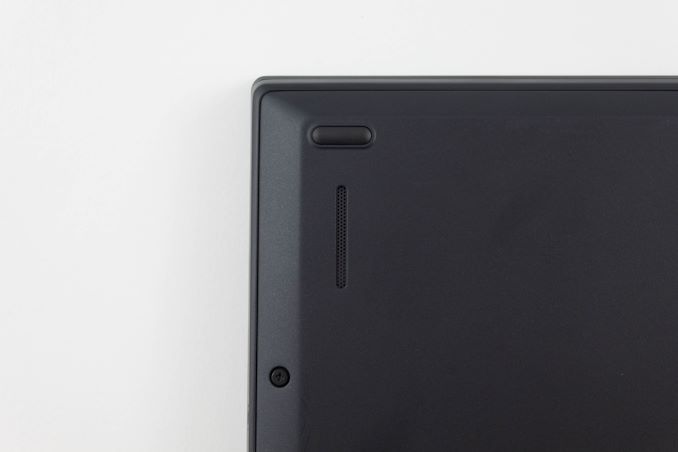 If you need a laptop for conference calls, the ThinkPad will work fine, but the stereo speakers which are downward facing do not offer much in the way of range, with almost no bass at all. They don’t get overly loud either, at just 75 dB(A) measured over the trackpad when playing our test track.

Lenovo ships the Thinkpad A285 with software that lets you choose the fan profile for a High Performance Mode, or a Quiet Mode. 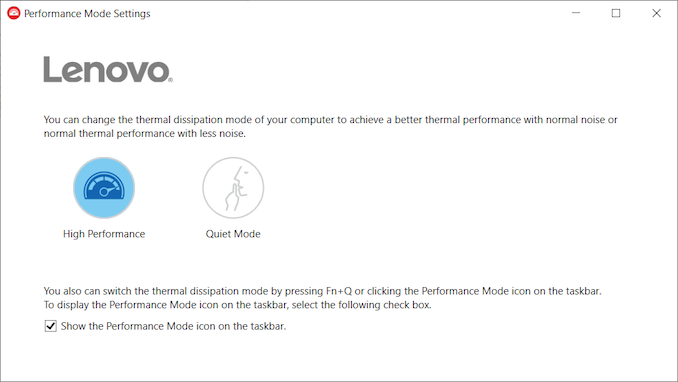 The fan profile is fairly tame though, even in the High Performance Mode, and even at maximum levels the laptop stays very quite at just 42 dB(A) measured 1-inch over the trackpad. That’s pretty decent for a thin chassis, but as for heat management, it isn’t great. 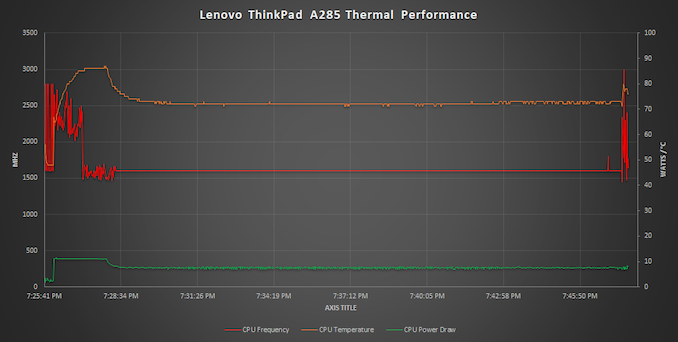 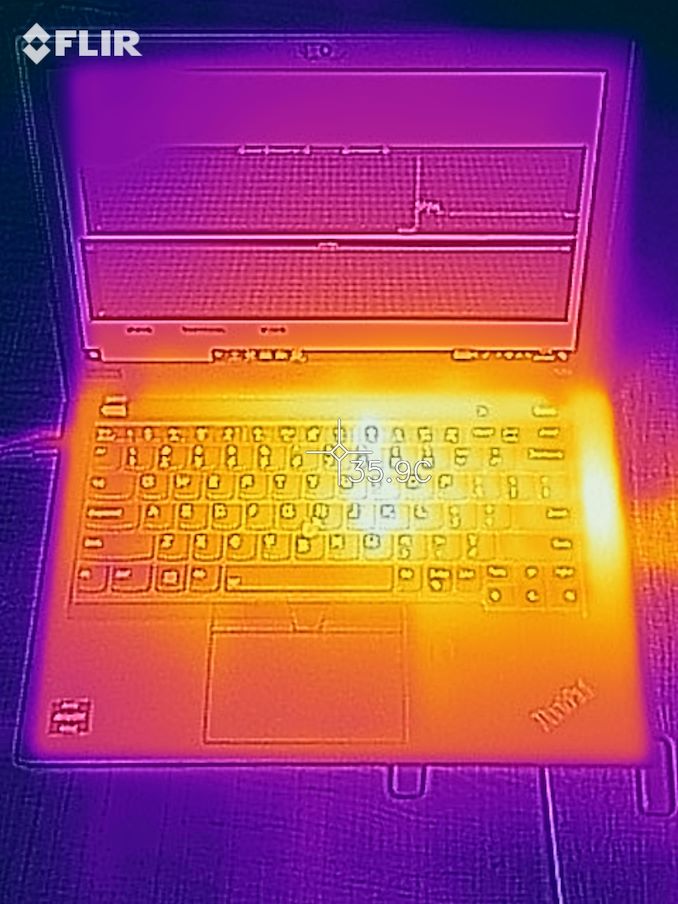 At 100% load, the system quickly peaks and then throttles down fairly significantly, with a long-term all-core load frequency of just 1600 MHz, well under the 2.0 GHz base of this processor. The temperatures are locked in around 72°C over a long workload, and CPU power draw is well under the 15-Watt TDP. The Thinkpad A285 is quiet, but don’t expect it to be a great device to crunch heavy numbers all day long.

Lenovo is great for not shipping ThinkPads with a bunch of unwanted software, and the A285 is no exception. You can order the A285 with Windows 10 Home or Pro, or through a volume seller most likely any configuration you need. 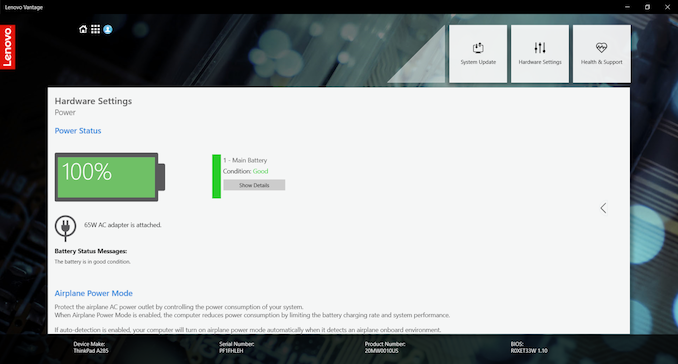 One piece of software that Lenovo offers on the ThinkPads is Lenovo Vantage, which is a system configuration utility that also serves as a repository to check for hardware driver updates, check the battery condition, and more. The current version of Lenovo Vantage is a great looking application, and clearly some thought has gone into the layout.

One of the nicest features, which seems so small, is that Lenovo Vantage can do a Toolbar by the system tray that shows the current battery percentage. Although Windows 10 offers a battery indicator on the task bar, it’s tiny, and only shows the percentage when clicked on. The Lenovo Vantage toolbar is a better version, with a nice, easy to read indicator. 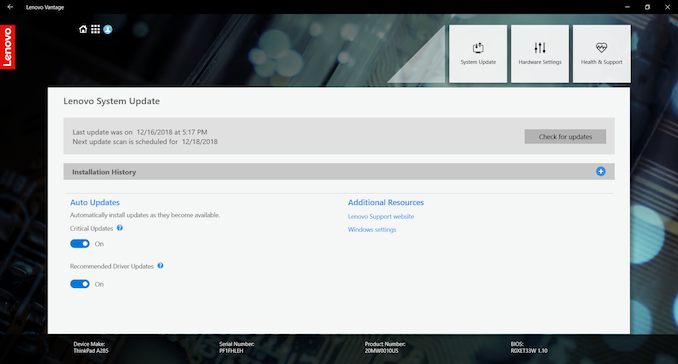 Lenovo also lets you set a battery charge threshold, which should extend the life of the battery if the laptop is mainly used on a desk. If this is enabled, the maximum charge will be limited to less than 100% to prolong the battery life. The software also has a detection method to determine if the laptop is plugged into an airplane outlet, and if so it will limit the performance to avoid drawing too much power. This is likely more useful on faster ThinkPads, but it’s a nice addition. 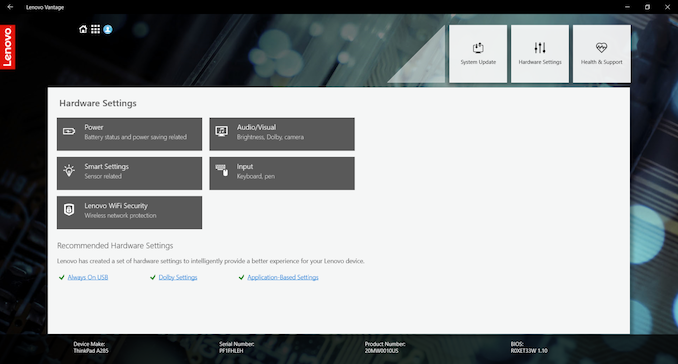 There’s also a System Update section which lets you manage driver and software updates from an easy to use pane of glass. It’s a great way to keep the system up to date for security and reliability without having to deal with each component on its own. Lenovo is not alone in offering this, but their implementation is very nicely laid out.

There’s also a hardware section where you can change the display brightness and color temperature for eye care, similar to Windows 10’s built-in Night Mode. Finally, you can scan the system for hardware issues and get support through the app as well.

Overall the Lenovo Vantage software is a nice addition to a business machine, with easy to use interfaces, and genuinely useful configuration options.