Perhaps more than most devices, a small laptop like the ThinkPad A285 is more likely to be used away from the desk, and therefore battery life is fairly important. Lenovo offers a 48 Wh battery inside the 12.5-inch chassis, which like the Intel based ThinkPad X280, has moved away from the dual-battery system and moved to just a single battery which isn’t replaceable by the end-user. This lets Lenovo cut some size and weight, but one of the nice factors of the older models was an optional larger battery for those that needed it, or the ability to swap out the rear battery if needed.

To test the battery life we have several scenarios. Our 2013 battery life test is very light, and with today’s PCs is almost an idle rundown. The newer battery life test is much more CPU intensive, and generally is more representative of what you’d see for basic tasks. Finally, we test the laptop on movie playback. The display is calibrated to 200 nits to keep a consistent brightness across all devices. 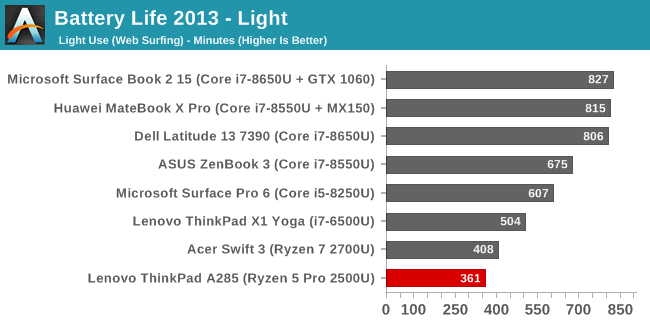 With just a 48 Wh battery, the ThinkPad A285 can’t compete, and sits right at the bottom with the worst battery life we’ve seen in a while, at just one minute over six hours. We’ll dig into why in a minute. 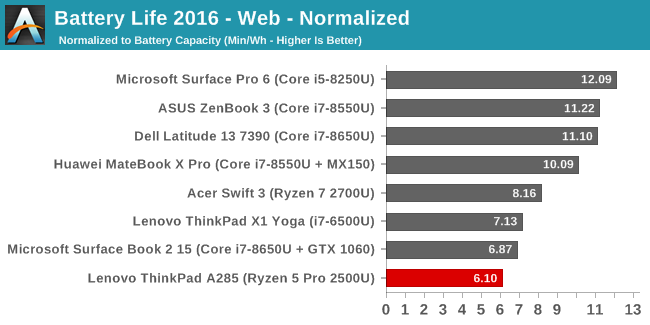 Our newer web test taxes the CPU quite a bit more, and generally knocks down the battery life significantly on any low-powered device. That is the case here, but the difference is not as dramatic as some of the other devices. 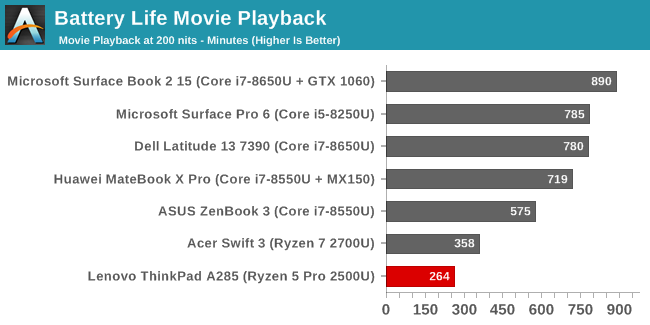 Generally movie playback is the most efficient test we have, but there’s something not right with Raven Ridge and movie playback. The decode can be offloaded to the media block, so in theory the CPU should be in its lowest power state for this test, but surprisingly the A285 fares worse here than in the web test. That result is mimicked by the other Raven Ridge laptop in our graph. 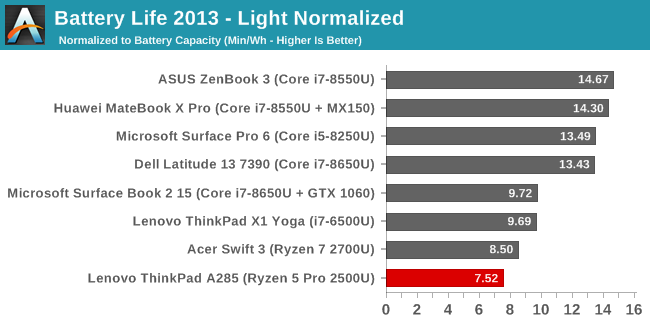 Finally we remove the battery capacity from the equation to see how many minutes of battery life each device gets per Wh of battery. The Raven Ridge devices sit right at the bottom.

On any system there are always various components drawing power at all times. The display is generally the highest power consumer on any system at idle, and the amount of energy it draws varies on the size, brightness, and resolution. For instance, the display of a Surface Book 2 15-inch draws about 7.65 Watts at 100% brightness. Setting the display down to 200 nits drops its power draw to 4.1 Watts. Meanwhile the rest of the system pulls just 1.43 Watts at idle.

Raven Ridge, it appears, has a power draw problem. We saw it on the Acer Swift 3, and we’re seeing it again on the Lenovo ThinkPad A285. The base power draw is quite high, which makes the battery deplete much more quickly than it should. Let’s look at some numbers: 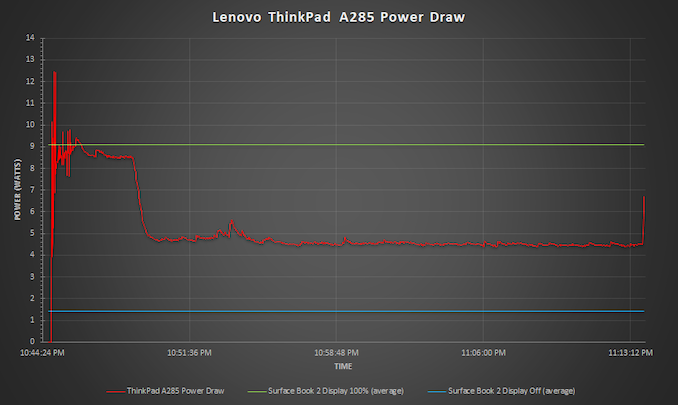 Breaking things down, we see that the ThinkPad A285 starts out with an average power draw of 8.62 Watts with its display on and the system idling. Waiting a few minutes for the display to turn off, and we see that the average system power consumption drops by just over 4 Watts to 4.6 Watts. This is a significant drop, but not significant enough. The Surface Book 2 in the same scenario idles at a little more than one-third of this, meaning the A285 – and specifically, the Raven Ridge platform inside – is drawing an additional 3 watts at full idle. This is a huge amount of power to draw at idle, and leads to the less than amazing battery life results on Raven Ridge devices.

Some of the draw will be from the DDR4 memory, since most Ultrabooks leverage LPDDR3 to reduce the power usage, but that is not going to be all of it. It looks like AMD has some work to do in order to get its power usage in check if they want to better compete in the laptop space. They need their Haswell moment.

The flip side of the coin is charge time, and Lenovo tends to offer quite quick charge rates. The ThinkPad A285 ships with a 65-Watt AC Adapter, which is much larger than the adapter that ships most laptops of this size, and it is rated to charge 80% of a charge in just 60 minutes. It connects via USB Type-C. 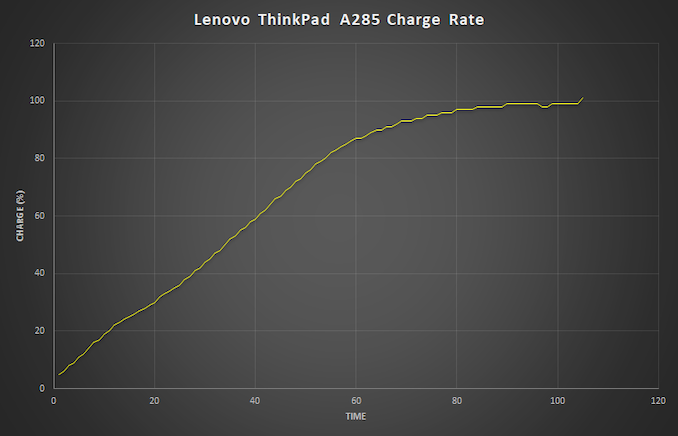 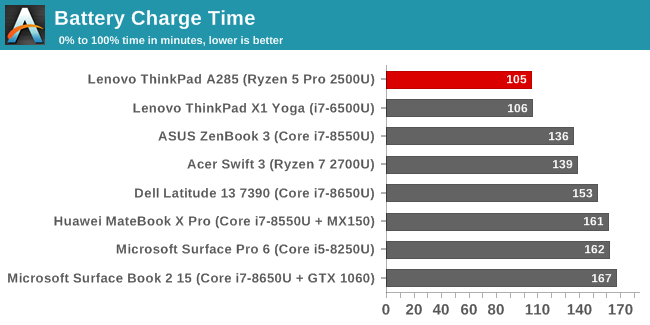 Not only does the 48 Wh battery get filled to 100% in the shortest amount of time, Lenovo even beats the 60 minute time for 80% by seven minutes.