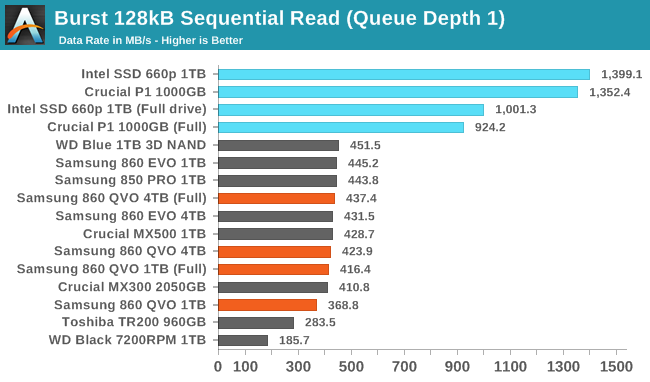 The burst sequential read performance of the Samsung 860 QVO is generally competitive with mainstream TLC SATA SSDs and is well ahead of the DRAMless Toshiba TR200. The 1TB 860 QVO's score is a bit lower when the drive isn't full because of the timing of the tests: the drive was still flushing the SLC cache in the background when the read test started. 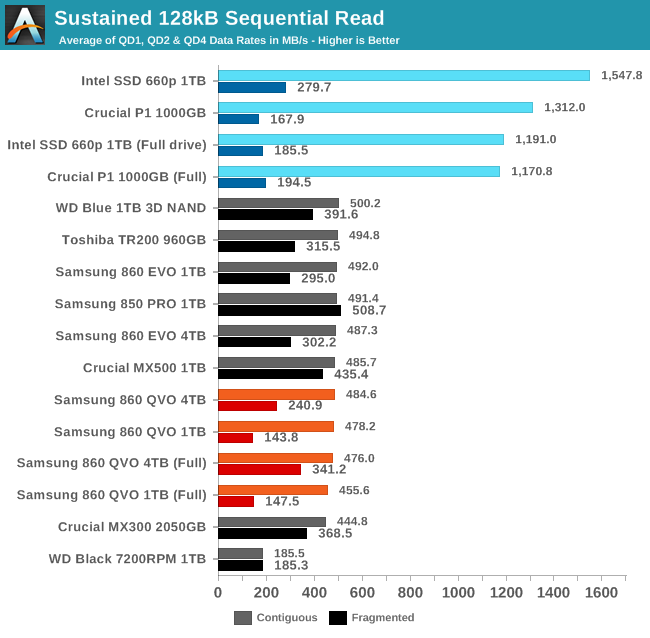 On the longer sequential read test, the 860 QVO continues to get reasonably close to the SATA speed limit when reading data that is contiguous on the flash itself. Where internal fragmentation is caused by writing to the drive randomly, the QVO's read speed suffers much more than for the TLC drives, and the 1TB 860 QVO ends up slightly slower than a mechanical hard drive.

The power efficiency of the 860 QVO is only a little bit lower than the TLC drives for the contiguous data case. When dealing with fragmented data, the QVO is slightly more efficient than the Intel/Micron NVMe QLC drives despite being a bit slower.

The queue depth scaling behavior for the 860 QVO is very typical, with QD1 not quite saturating the SATA link but all higher queue depths hitting close to full speed. The one exception is a slight decrease from the 1TB drive during the final QD32 phase. 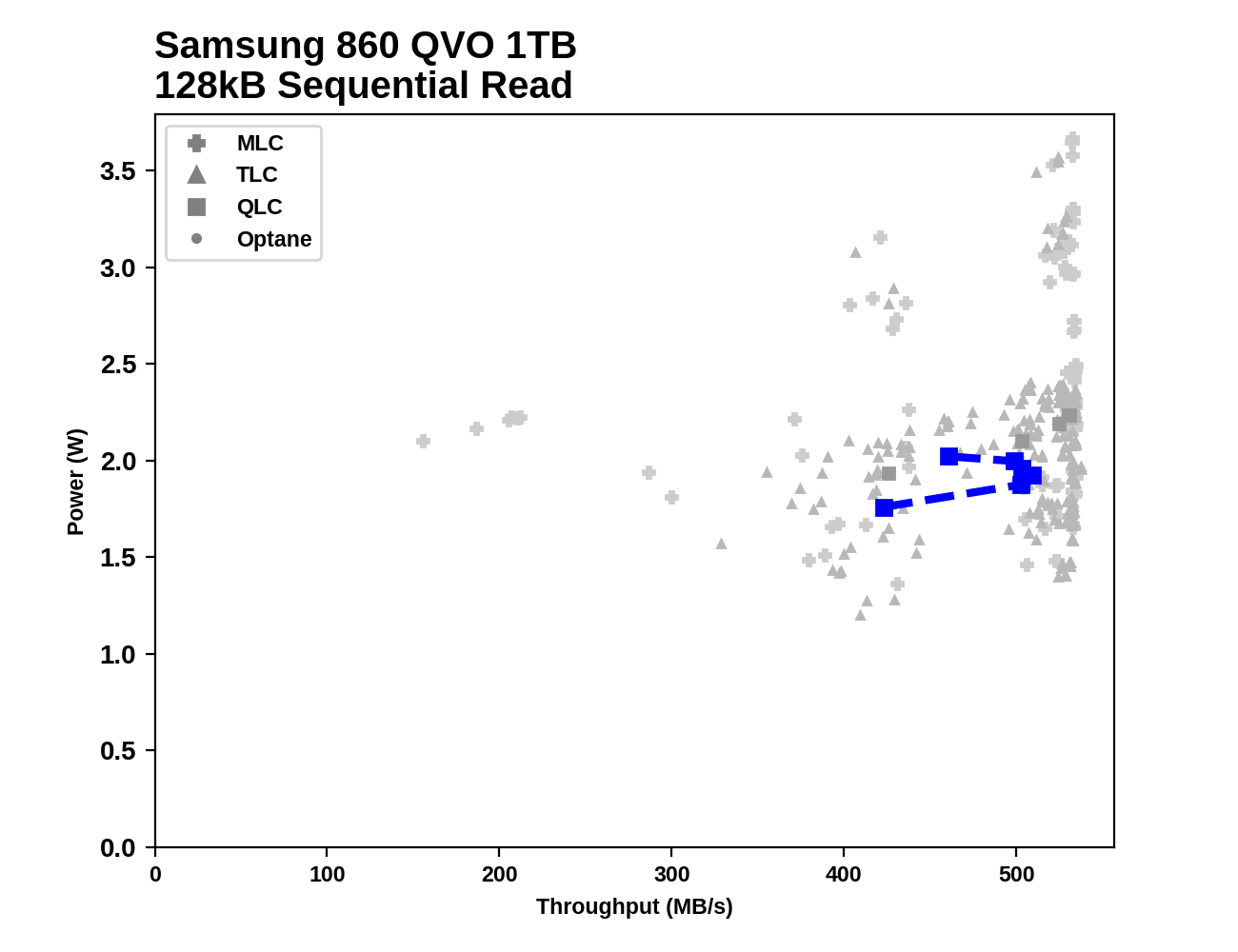 Aside from the mild QD32 drop in performance, the sequential read behavior of the 860 QVO doesn't fall outside the normal ranges we've come to expect from TLC drives. 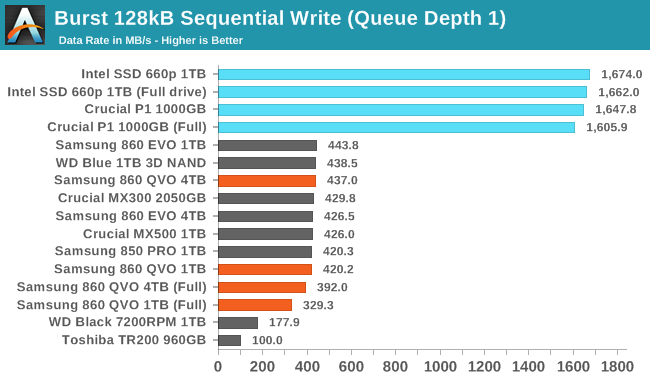 The Samsung 860 QVO handles the burst sequential write test fine when the drive is mostly empty and there's plenty of room in the SLC cache. When the drive is full, the 1TB model's speed suffers somewhat, but is still much faster than the mechanical hard drive or the DRAMless TLC drive. 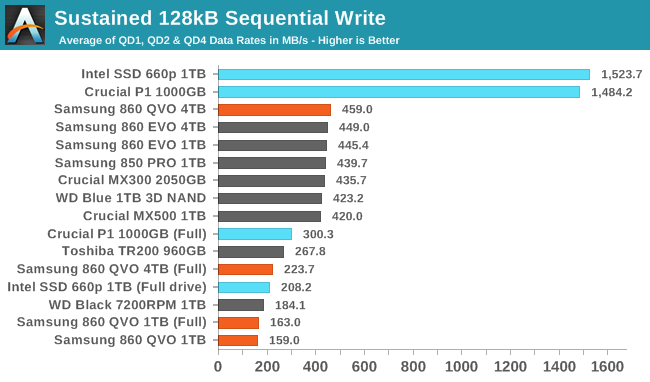 On the longer sequential write test, the SLC cache of the 1TB 860 QVO is not quite enough even when the drive is mostly empty, so it ends up in last place. The 4TB model's SLC cache keeps up with this test and it is as fast as any SATA drive.

The 1TB 860 QVO is mostly slow and steady during the sequential write test, while the 4TB model's performance is as good as any other SATA drive. 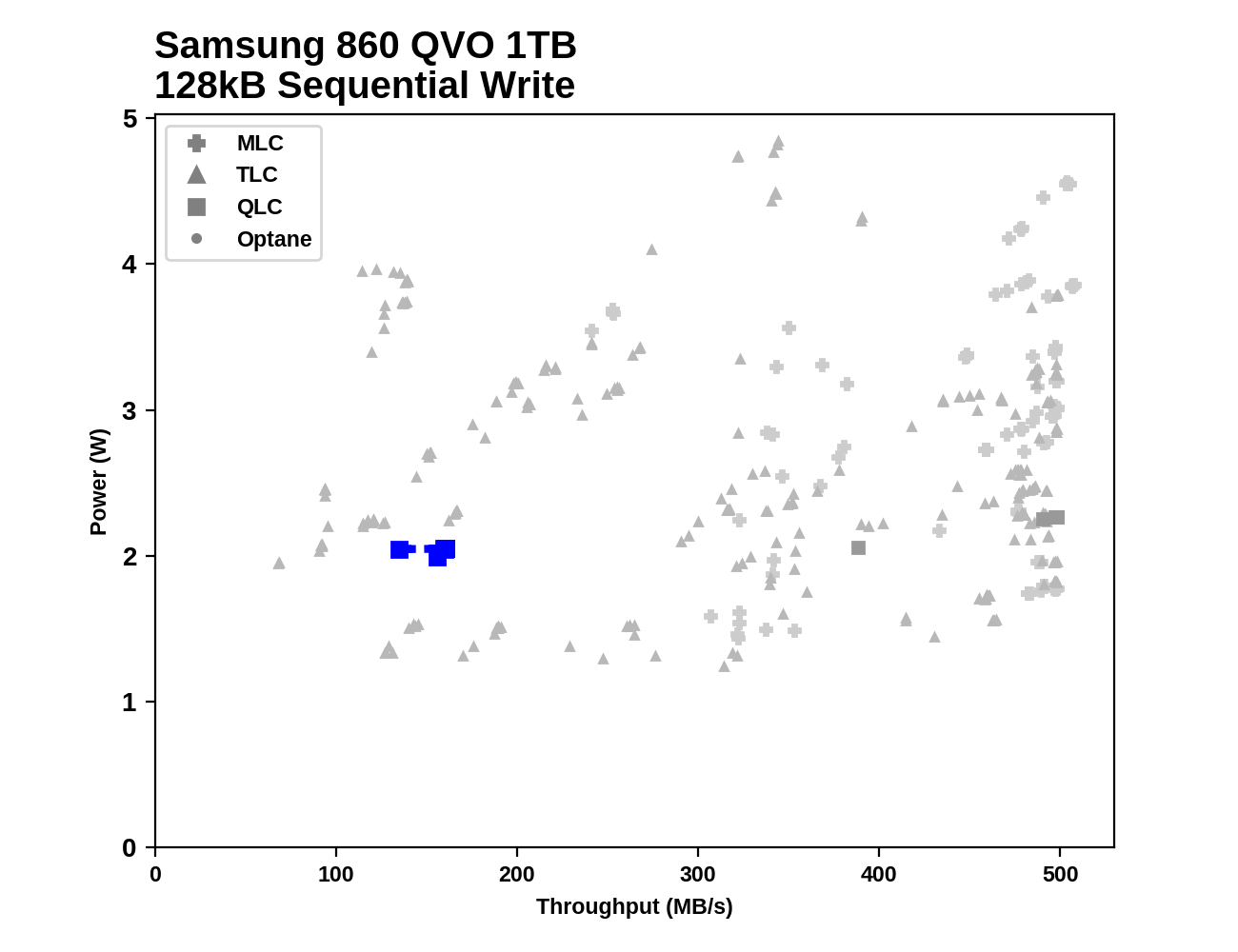 The 1TB 860 QVO's sequential write behavior sticks out clearly as far slower than typical, but it's not unprecedented: there have been TLC drives this slow, but most of them were much smaller than 1TB. The 4TB model blends in with the crowd much better.