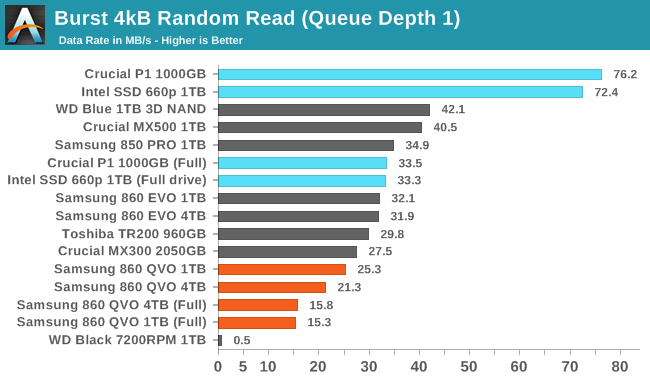 The burst random read performance of the Samsung 860 QVO is clearly lower than the 3D TLC competition, while the Intel/Micron QLC NVMe drives have no trouble competing against the field of mainstream SATA TLC drives. Even in the worst case of the smallest QVO being entirely full, read speeds are still vastly better than a hard drive. 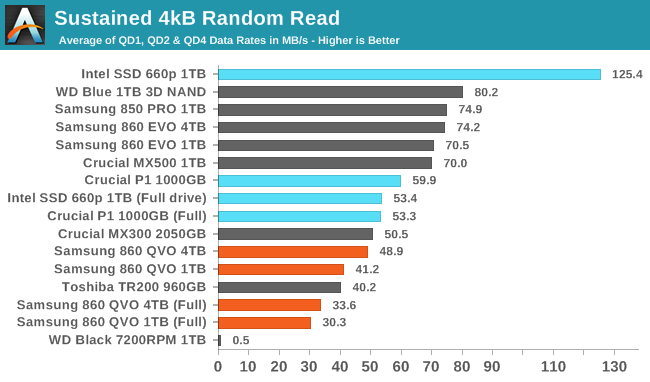 On the longer random read test, the Toshiba TR200 DRAMless TLC drive is no longer able to stay ahead of the 860 QVO, and even the Intel/Micron QLC drives fall behind most mainstream SATA drives (especially when full).

The power consumption of the 860 QVO during the random read test is only slightly higher than its TLC-based relatives, but that's plenty to push its efficiency scores into last place, given the poor performance.

The queue depth scaling of the 860 QVO during random reads is fairly typical in shape, with improvements starting to taper off after QD16. However, the vertical scale is important: the QVO doesn't ever reach even half the performance of the best TLC-based SATA SSDs. 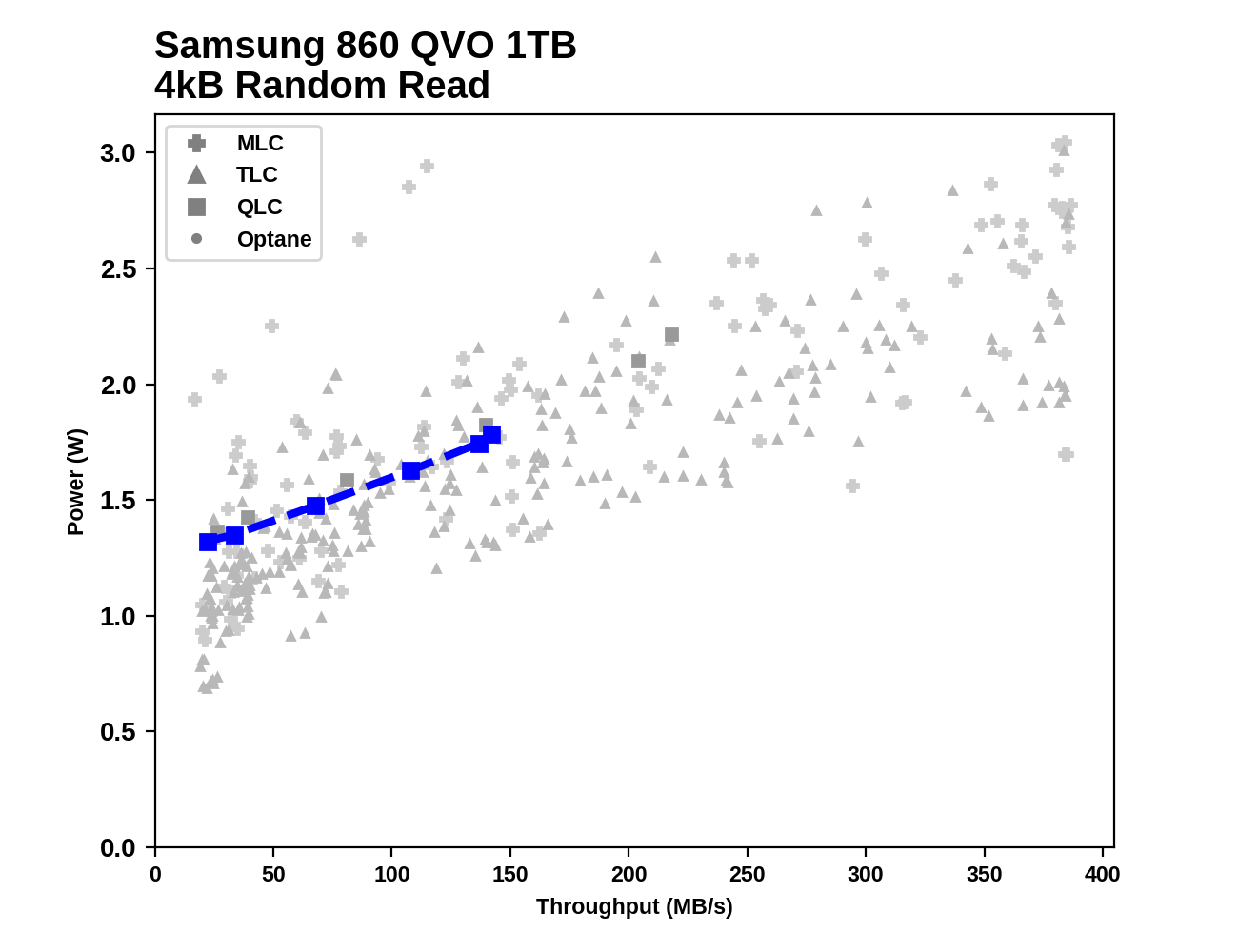 Looking at the 1TB 860 QVO's random read results compared to all the other SATA drives in the benchmark database, it is clear that the QVO isn't anywhere near the cutting edge for power efficiency or peak performance, but there are worse drives out there. 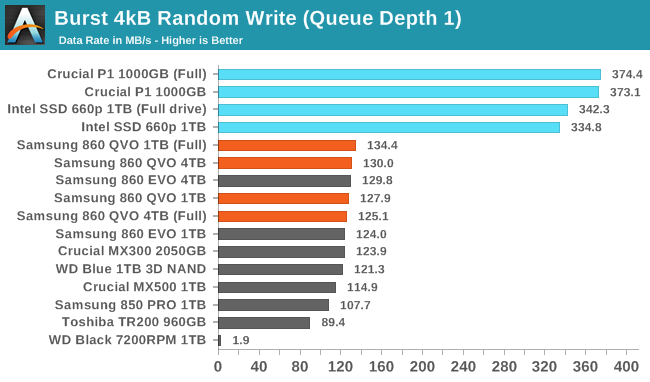 The SLC cache of the 860 QVO is very effective for the burst random write test, leaving it tied or slightly ahead of the 860 EVO. 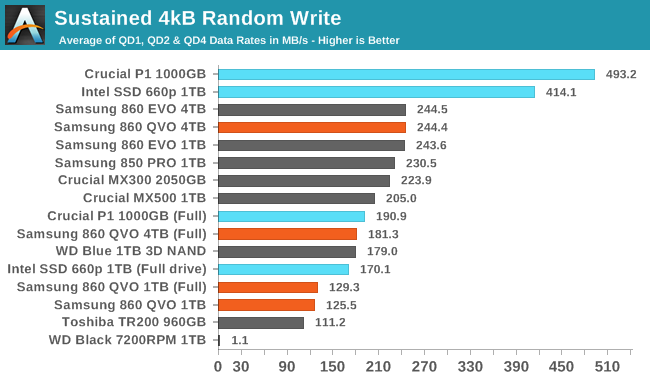 On the longer random write test, the larger SLC cache and greater parallelism of the 4TB 860 QVO helps it keep pace with other top SATA SSDs, but the 1TB QVO has to settle for being slightly faster than the DRAMless TLC drive.

The QVO is again a bit more power hungry than most of the TLC drives, which doesn't hurt the 4TB QVO's efficiency score much thanks to its good performance, but the 1TB QVO ends up tied for last place with the full-drive performance from the Intel/Micron QLC drives.

The 1TB 860 QVO shows very little random write performance scaling with increasing queue depth, though power consumption does go up significantly from QD1 to QD2. The 4TB 860 QVO shows a much more typical scaling up to saturation at QD4, with a performance curve that is almost an exact match for the 4TB 860 EVO. 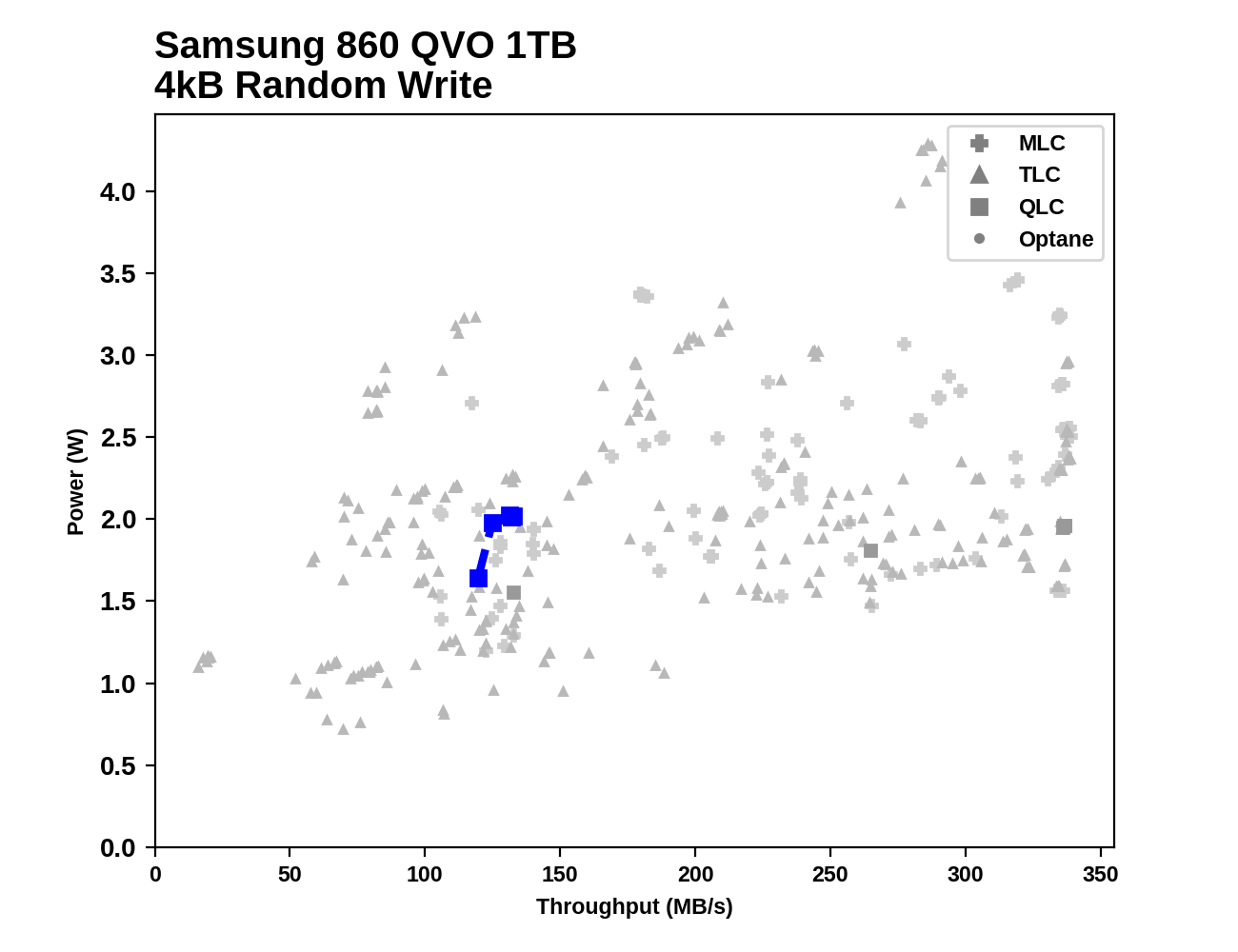 There are some TLC SATA SSDs that draw the same power to deliver half the random write performance of the 1TB 860 QVO, but in the grand scheme of things the 1TB QVO's results on this test are sub-par. The 4TB starts out in the same spot but ends up hitting the SATA performance wall without consuming too much power.