Even with all the hullabaloo surrounding how Intel defines TDP and what values the company should actually be advertising for the power consumption of its processors, the simple fact is that processors generate thermal energy when they run. Sometimes it’s a small amount, and sometimes it’s a lot, but in every case that thermal energy has to be managed, either by the box cooler, some super extreme water chiller loop, or by a super massive fanless heatsink. In order to maintain performance, the thermal solution also has to be suitable for the environment at hand. 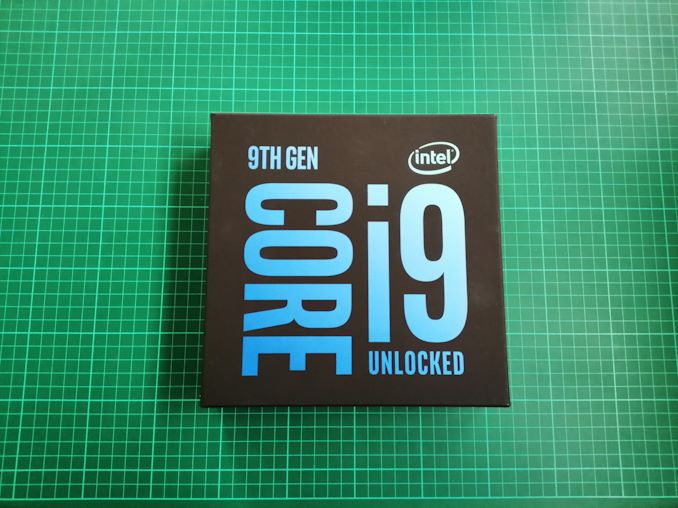 Nothing proves more channeling than designing a system for something small, and still maintaining high levels of performance. There are tradeoffs – performance for noise, or silence for performance. One way to manage this is through configuring the turbo and power values of the system in the firmware, and it is this method that OEMs use for laptops and mini-PCs.

Some Performance Loss, But More Efficient

The performance that Intel guarantees is the one on the box: the base frequency at the sustained TDP. For system integrators or builders, this gives a simple comparison point, and when we set our power consumption limits for the Core i9-9900K, this is what we saw at full load: 95W gave 3.6 GHz at 7-8 core load. 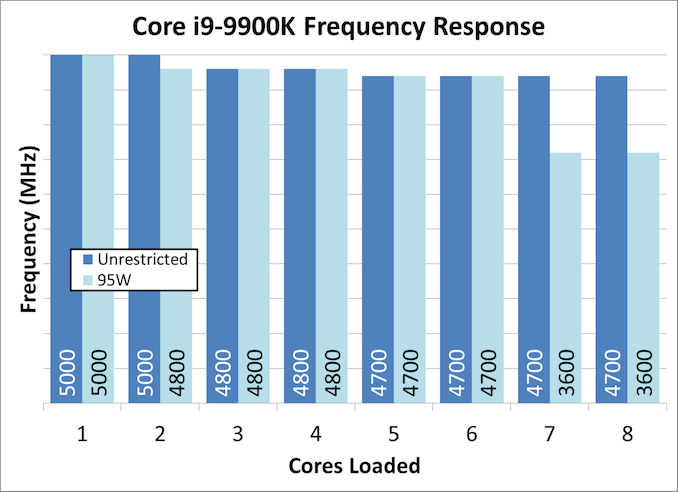 Losing almost half the power from standard operation caused the frequency to drop by 23% at the fast and furious end, which has a knock-on effect on performance. As was perhaps to be expected, for our throughput benchmarks, it was sizeable. For this data, we’re going to represent the performance uplift from 95W to the ‘unlimited power’ mode:

The system and office tests, which are a mix of latency and throughput tests, saw just under a 10% gain going from 95W to unlimited mode. For pure throughput however, that 23-24% difference in frequency gave an equivalent gain to the unlimited power mode. The only flipside is power: the extra performance pushes power consumption to 164-165W, which is a 74% power gain. If we were going for performance per watt, then the 95W wins that battle very easily. It all depends if the form factor the processor is in can provide sufficient cooling.

Doing these numbers gave me an idea for a metric for power efficiency. We currently run our power tests during a run of POV-Ray, and as a result, we can plot the power consumption during our POV-Ray test against the POV-Ray result score. 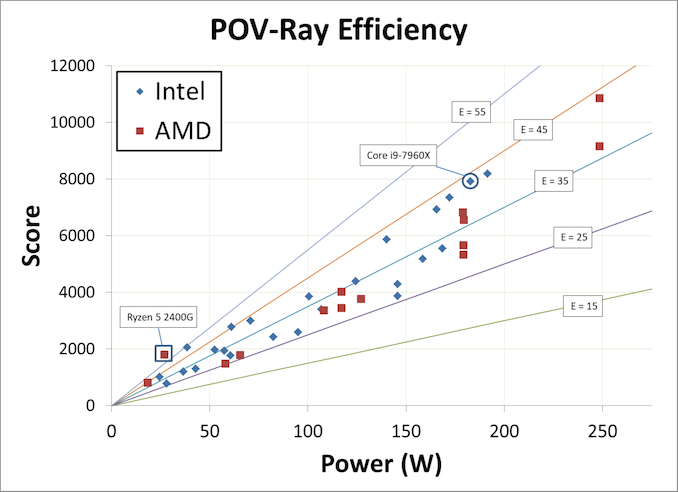 The highest performers are at the low end of the spectrum of what we’ve tested, with the Ryzen 5 2400G and Core i5-8305G (Kaby Lake-G) being the top performers, getting an efficiency rating (score/power) of 67 and 53 respectively. However Intel’s Skylake-X parts and the Threadripper 2990WX all scored highly on this metric too, around the 43 mark. This is likely because these high-power processors actually give less power per core, and each core is nearer to its peak efficiency for frequency/voltage.

The Intel Core i9-9900K, in normal operation, scores an efficiency rating of 32.9. This rises to 44.2 if the processor is fixed to 95W. This ultimately puts the 9900K in the limelight for an SFF system: when the power is limited to 95W, you get all the single core performance, most of the variable threaded performance, and around a 10-27% loss in throughput testing, most noticably in rendering. Overall, it acts like a 9900K in single thread mode, and like a 9700K in multi-thread mode.