Though the Dell DJ comes in two different models, both have the same weight and size specifications. As expected, this is a hard drive based MP3 player. There really is no other way to offer a competitively priced 5GB or greater MP3 player. Using NAND memory to achieve high capacities would produce a ridiculously expensive MP3 player. Creative's Muvo TX 512MB already hits the sub $250 marker.

Measuring at 4.1 x 2.7 x 0.86 inches, it has the feel of a small PDA without the small weight advantage. Weighing 7.61 ounces, it feels like you're holding a small brick. In fact, it weighs more than a Dell Axim X5 (6.91 ounces), which is one of the beefier PDAs to grace the market. 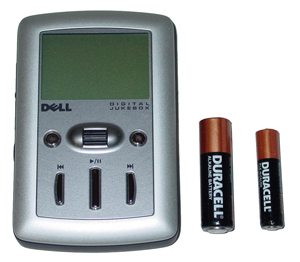 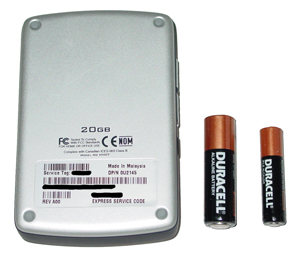 
Unlike Creative's Jukebox design, Dell places most of the buttons on the front of the unit. Their functions are outlined by the decals above or on the button itself, except for the navigational scroll dial that also functions as an Enter command when pushed in.

The casing for the front and back side of the DJ seem be made of anodized aluminum, with a (black) rubberized metal material (possibly steel) as the casing between the two pieces. The center casing has a nice grip to it because of the rubbery texture, and it is similar to the material that we have seen used on the hand-rests on some of the Compaq Presario notebooks.


One of the immediate things that we noticed is the back and home buttons, both having translucent decals centered in the middle. While it is a bit hard to make them out when the DJ is powered down, the buttons light up pretty brilliantly when powered up, as part of the unit's backlight system, even when you are in a bright room. The reverse/skip back, play/pause, and forward/skip forward buttons are only illuminated by a small outline of backlight.

It would have been possible to invert the design, so that the inner portion of the lower three buttons would be backlight and the outline opaque. However, we prefer the design that Dell chose. Going the other way would make the buttons stand out too much because of the amount of backlight coming through. The design chosen streamlines the amount of light emitted and still keeps everything distinguishable.