One of the key topics in power consumption recently has been whether Intel’s approach to power, or to how it represents its Thermal Design Power (TDP) values, is valid or not. Intel’s take on TDP is that it should represent the sustained power of the processor, which unfortunately does not take into account any of the turbo modes available to the users (or disclose how long those turbo modes should be available for). Part of this is not only confusing, but motherboard manufacturers rarely use Intel specifications for these limits anyway, as you can read in our article covering the practice here.

With the Core i9-9980XE, the typical representation of power is used: stick to the turbo tables unless the system is thermally compromised. In this case the 165W TDP value is a guide, not a limit or a suggestion – it relies on the quality of the silicon and the ability of the motherboard manufacturer to be stable, performance focused, and competitive.

Comparing the Core i9-9980XE to the Core i9-7980XE, the new processor has a higher base frequency by 400 MHz, a higher single core turbo frequency by 100 MHz, and a higher all-core turbo, but uses a newer 14++ manufacturing process and soldered thermal interface material. The peak power consumption numbers are as follows:

If we remove the ‘idle’ power numbers away to see the core-only power, then the Core i9-9980XE uses around 152W just for the cores, which should be around 8.5W per core. The 32-core Threadripper 2990WX by contrast uses around 6W per core.

If we look at the efficiency of each processor, with our power numbers taken during a POV-Ray run: 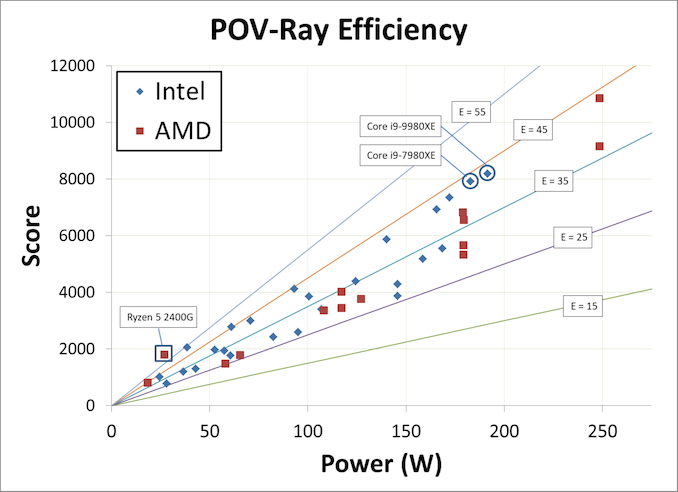 The Core i9-7980XE gets a performance per watt of 43.3 POV-Ray points per watt - the new Core i9-9980XE scores a little less at 42.7, as for the extra 5% of power, we get a 3.6% increase in performance. For competition, the only HEDT processors coming close are the other Intel HEDT parts, or the 2990WX at the top right of the diagram. Obviously, this is benchmark specific, but an interesting comparison nonetheless.