Threadripper 2: Filling Out The Product Portfolio

With the quad silicon die strategy for Threadripper 2, there are plenty of ways that AMD could have chopped and changed the core counts to get various processors at various price points. For Intel, having a product at every pair of core counts seems to be integral to the company strategy, producing seven different processors from six cores to eighteen cores, whereas AMD has decided to split into 12, 16, 24, and 32. 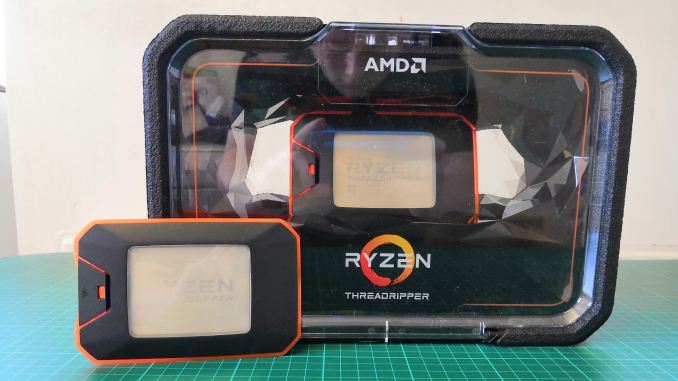 We reviewed the 32-core Threadripper 2990WX and the 16-core Threadripper 2950X back in August. The results from that review were very mixed: the large 32-core behemoth was an absolute beast in non-communication limited workloads (either to memory or other cores), and absolutely broke down anything the competition had to offer. On the catch side, that didn’t apply to everything, and in the communication limited cases, the 2950X was preferred, especially as it was a lot cheaper. Expanding out to the quad-die strategy, as AMD has done, with two of those dies not being directly connected to memory, both helps and hinders performance. The upshot is that for the price of Intel’s 18-core, users could get 32-cores from AMD, if you can use them. In that review, out of the Threadripper family, we said that the 2950X was likely where users looking for the best performance per dollar were likely to end up.

Today sees the launch of the other two processors in the family, the 12-core 2920X and the 24-core 2970WX. There is ultimately less fanfare with these parts, being cut down versions of the previous two, and so on paper, given the same or lower frequencies, we would normally expect them to perform worse than the 2990WX and 2950X. This would be a good reason as to why they’ve been released a little bit later. In our performance testing, this kind of bears fruit, but not always.

In our power analysis, having fewer cores per die means that we see a sharper uptick in power consumption when threads are placed onto a new die. This is because the new die is ‘cool’, in the sense that nothing is running on it, and as a result the cut down dies actually hit their peak power sooner, which should translate into frequency. However, it really does depend on the workload, and most user workloads either use all of the cores, or just a few. In order to get the benefit here, we’re looking at multi-taskers.

For performance, in most multithreaded benchmarks we see the 2920X sitting below the 2950X, and the 2970WX sitting below the 2990WX. This is mostly because of core counts, but depending on how the benchmark scales and memory accesses, we do see the 2970WX sometimes go above the EPYC 7601 with its lower frequency, despite its higher memory bandwidth. At $1299, the 2970WX is going to be $500 cheaper than the 2990WX, which certainly makes it aggressive for price/performance. 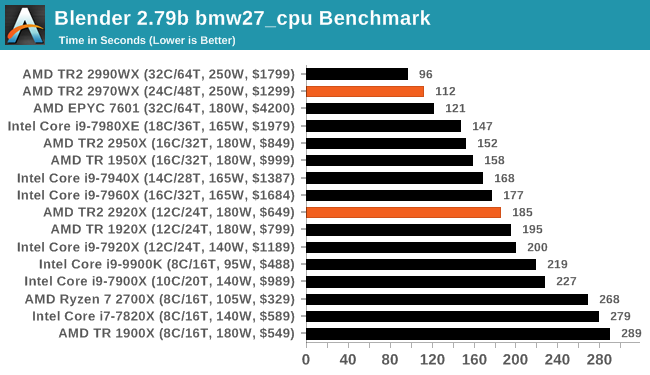 We do see on occasion that the 2970WX actually beats the 2990WX, such as in PhotoScan, 3DMark Physics and GeekBench, because there are fewer cores to compete for the inter-core bandwidth. However on the whole, the 2990WX does win out.

The 2920X is actually the baby of the Threadripper 2 family, so it really has to compete on price/performance to be noticed. The thing is, except for the true multi-threaded workloads, the Ryzen 7 2700X is going to be the better day-to-day chip. It all depends on if the TR2 system is going to run as a standalone workhouse, or as a true day-to-day machine. As a workhouse, it’ll go beyond the 2700X for sure. 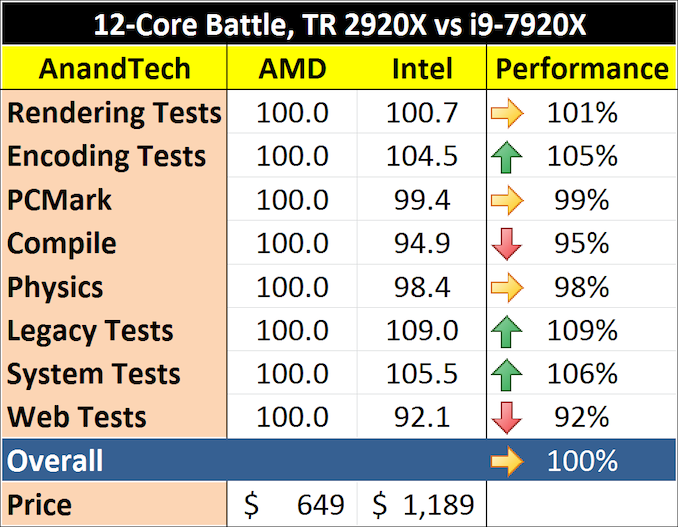 If we take out the obvious AVX-512 wins for the i9-7920X, the Intel chip loses performance in the compile and web tests, but gains performance in encoding and system tests. Overall, these chips are around the same, except for the retail pricing: With AMD, you save 45%. That’s a no-brainer, right?

On the results overall, we can see why these two chips were launched later in the year compared to the 16-core and 32-core parts. They are more cost effective, although the performance is in line with the cost. Between all of the Threadripper parts, first generation and second generation, our recommendation is still on the TR2 2950X.