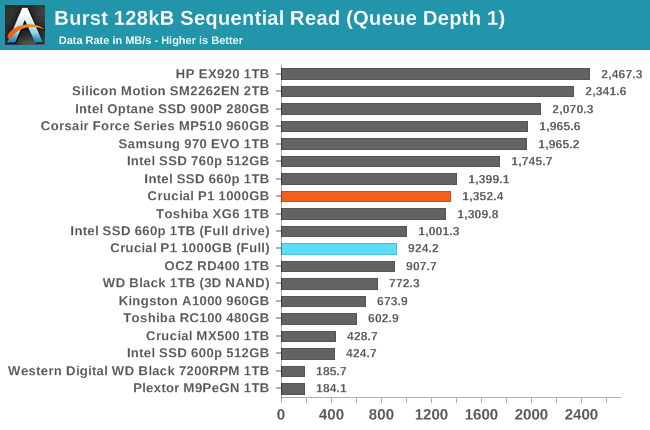 The burst sequential read performance of the Crucial P1 is decent for an entry-level NVMe SSD. Even when the test is run on a full drive, the P1 is about twice as fast as a SATA SSD. The Intel 660p is slightly faster on this test, with more of an advantage in the full-drive/small SLC cache conditions. 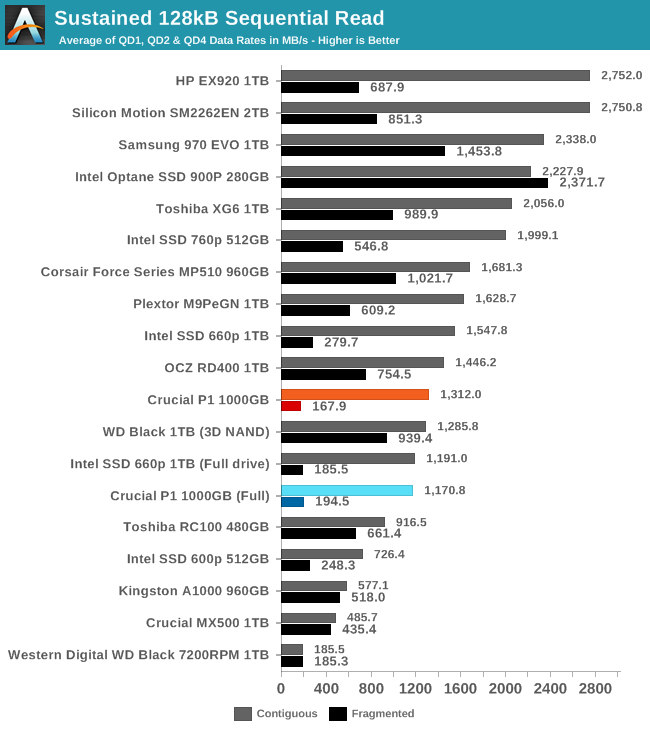 On the longer sequential read test, the Crucial P1 sustains sequential reads at over 1GB/s even when full, so long as the data is contiguous on the flash itself due to having been written sequentially. When reading data that has been modified heavily by random writes, the drive has to do random reads behind the scenes and its performance is no longer competitive with other current NVMe SSDs or even mainstream SATA SSDs, though it does at least maintain roughly the same level of performance that can be expected from a hard drive (which doesn't need wear leveling and thus is not subject to internal fragmentation). As with the burst sequential read test, the Intel 660p is slightly faster.

The power efficiency of the Crucial P1 when reading contiguous data is reasonable for a NVMe drive but nothing special. When reading data with internal fragmentation, the power consumption is the same but the reduced performance drags the efficiency way down, to only 50% better than a 3.5" hard drive.

The Crucial P1 reaches full sequential read speed of just under 2GB/s at QD8 or higher. While the Intel 660p has the advantage at low queue depths, the P1 ends up slightly faster at higher queue depths. 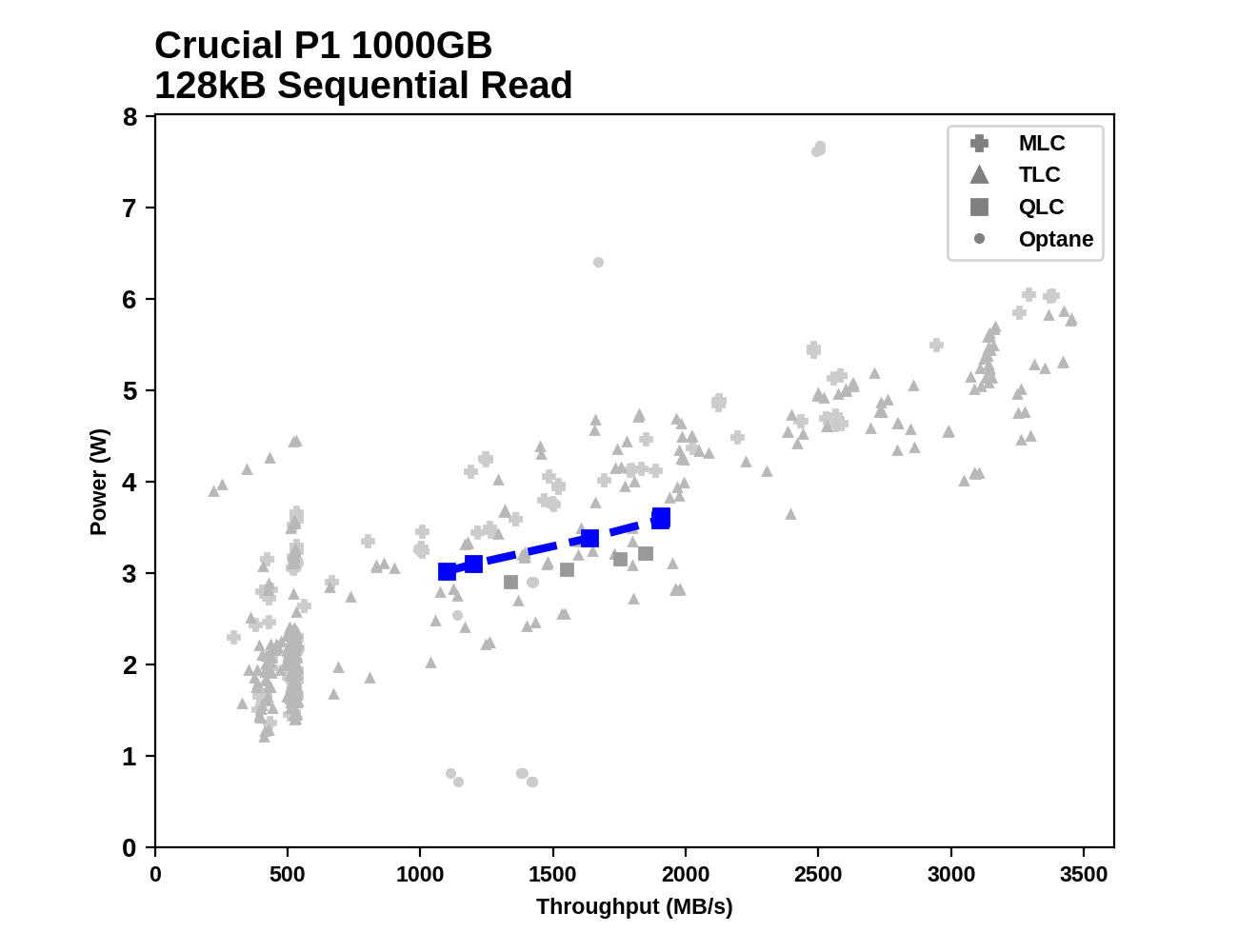 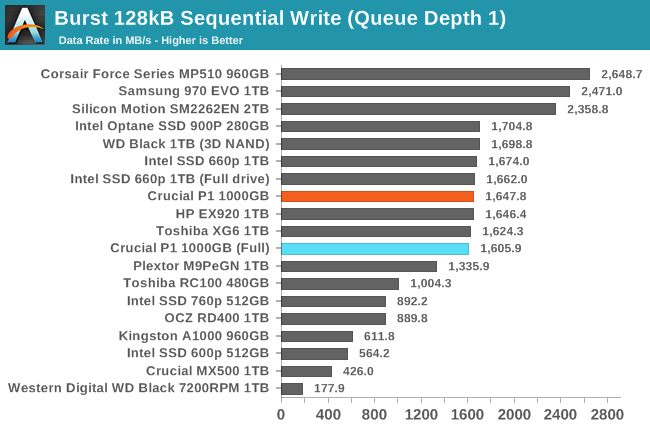 On the burst sequential write test, the Crucial P1 is on par with many high-end NVMe SSDs, thanks to the high write performance of its SLC cache. This test is short enough that the P1 doesn't overflow the SLC cache even when it is at its minimum size due to the drive being full. 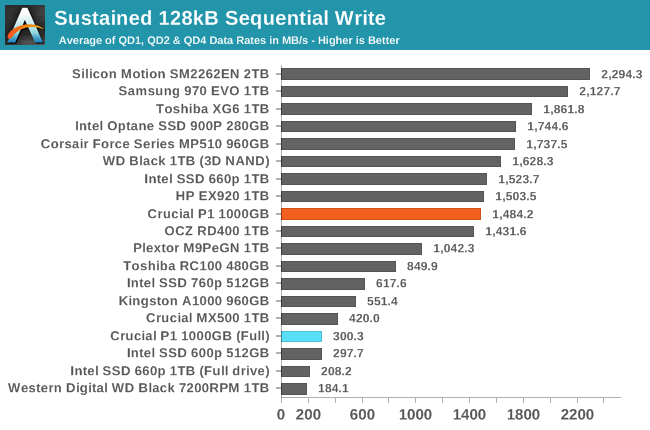 On the longer sequential write test, the Crucial P1 continues to perform well when the drive is mostly empty and the SLC cache is at its largest. When the drive is full, this test writes enough to overflow the cache and performance drops below that of mainstream SATA SSDs.

Power consumption by the Crucial P1 during the sustained sequential write test is lower than average for NVMe SSDs, so the efficiency is good when the test hits only the SLC cache. When the drive is full and the SLC cache overflows, the P1's efficiency is significantly worse than almost all of the competition, though the performance per Watt is still several times what a hard drive can manage.

The Crucial P1 hits its full write speed at a queue depth of 2 or higher, when writing to the SLC cache. When the drive is full, the SLC cache overflows before the QD1 test phase is over, and performance bounces around a bit but stays generally quite low with each phase of the test. The Intel 660p is slightly faster when writing to its SLC cache, and performs more consistently when the cache is constantly overflowing. 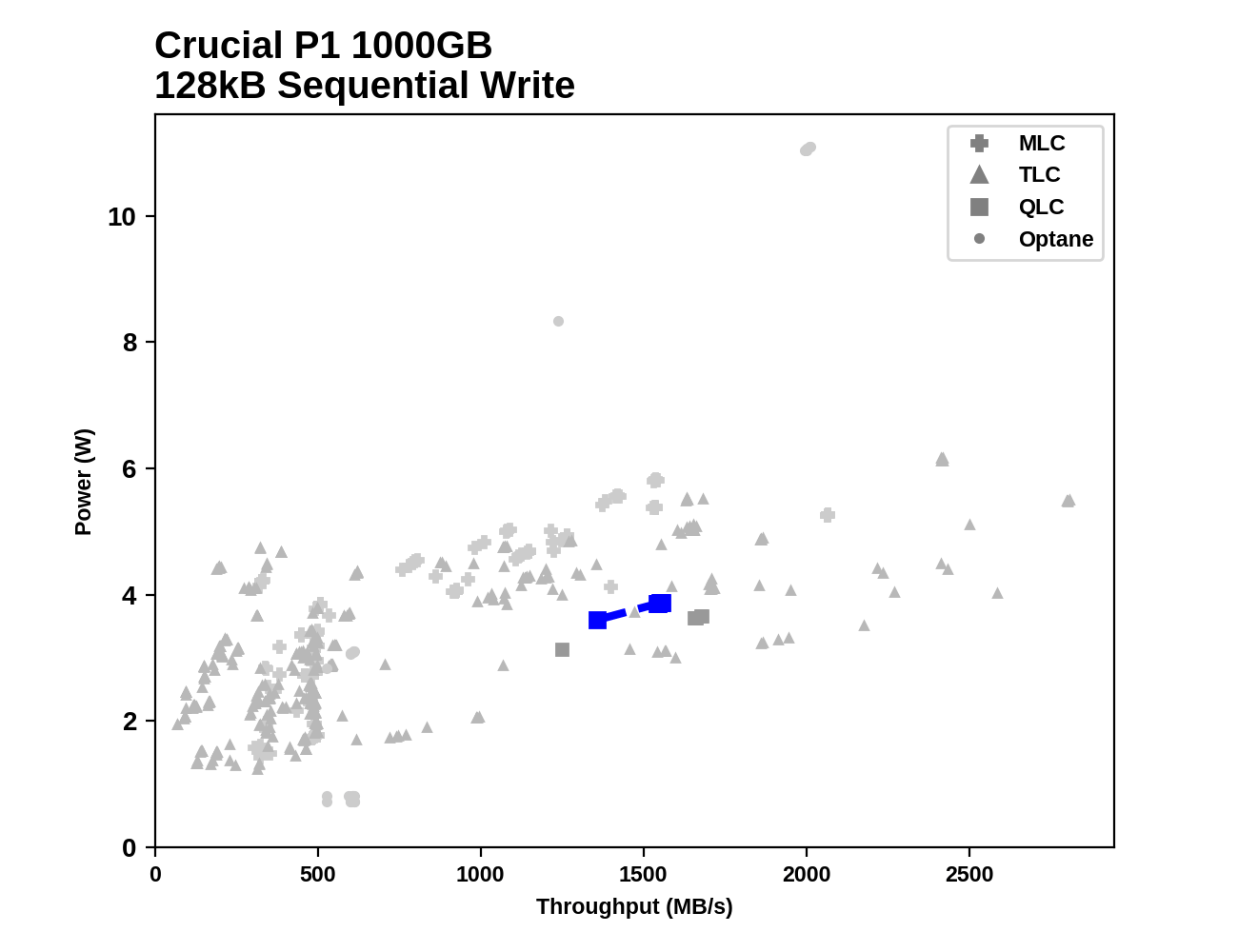 Compared against all the other drives that have completed our 2018 SSD test suite, the sequential write performance and power consumption of the Crucial P1 are better than most other low-end NVMe drives (or drives that would be considered low-end if they were still on the market). But there are numerous high-end drives that vastly outperform the P1, and some of them use a bit less power in doing so.

This test starts with a freshly-erased drive and fills it with 128kB sequential writes at queue depth 32, recording the write speed for each 1GB segment. This test is not representative of any ordinary client/consumer usage pattern, but it does allow us to observe transitions in the drive's behavior as it fills up. From this, we can estimate the size of any SLC write cache, and get a sense for how much performance remains on the rare occasions where real-world usage keeps writing data after filling the cache.

The 1TB Crucial P1 manages about 155 GB of sequential writes before the SLC cache overflows and performance tanks. The drive does manage to free up some SLC cache on several occasions before the drive is completely full, so the write speed occasionally jumps back up. The Intel 660p only lasts for about 128 GB before its cache runs out, and while it does show some variability in write speed during the rest of the drive fill, it never gets all the way back up to the full SLC write speed.

For extremely large sequential write operations that overflow the SLC cache, the Crucial P1 and Intel 660p average out to about the same speed as a 7200RPM hard drive. The fast writes to the SLC cache don't last long enough to bring the average up very far above the steady-state write speeds of about 100MB/s. High-end NVMe SSDs with modern 3D TLC NAND and 8-channel controllers can sustain write speeds that are about an order of magnitude higher after the SLC caches run out.