Given that we’ve seen excellent raw CPU performance of the Kirin 980, we should also largely see this translated over to actual system performance. System performance is what we call the performance of more realistic every-day workloads, which are most of the time mainly transactional in their nature, in contrast to the more continuous long SPEC tests of the previous pages.

The Mate 20’s come with Android 9/P out of the box, and in terms of mechanisms that promise to improve system performance, Huawei/HiSilicon employ a custom scheduler for the Kirin 980 that is able to properly deal with the three efficiency CPU groups (Perf & efficiency A76’s, and A55s).

Huawei has been locking down things quite tightly over the past year, so I wasn’t able to extract that much information out of the kernel. What I did find out is that it looks like they’re using a scheduler that is based on Google’s ACK (Android Common Kernel) and builds custom modifications on top of that. Among the key features that look to be enabled in the kernel is WALT – which I think if I’m not mistaken would make this the first non-Qualcomm SoC which sports the more responsive load tracking mechanism out of the box.

It’s to be noted that after our recent article addressing less than honest benchmarking behaviour, that Huawei has changed the behaviour of its battery power modes. The new “Performance mode” in the battery settings is off by default, which I found quite a bit odd as a default setting. To be able to get the full performance of the SoC blocks, this setting should be turned on, and we’ll note that all our testing was with the performance mode enabled, something which Huawei also recommended us to do. 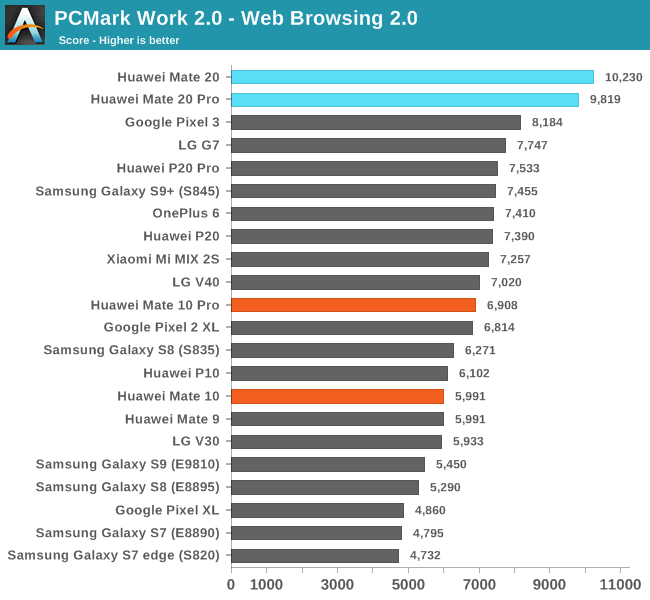 Starting off with the PCMark Web Browsing 2.0 test, we see the Mate 20’s take a considerable lead among all Android devices. Here it is evidently clear that this is a considerable generational leap in performance, and more so compared to the previous generation Kirin 970 devices. 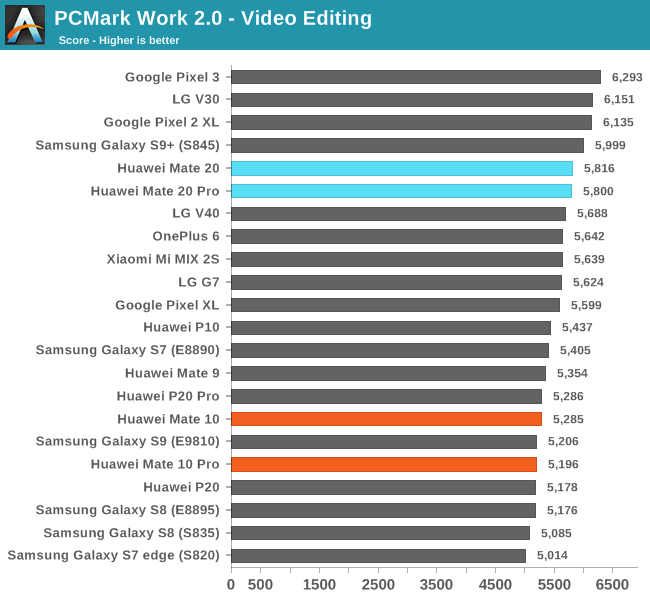 The video editing test again has become somewhat non-representative of performance as most flagship devices hover within the same score range without much difference between each other. I’m still now sure why some devices score ever so slightly higher or lower, but the absolute differences are quite minor.. 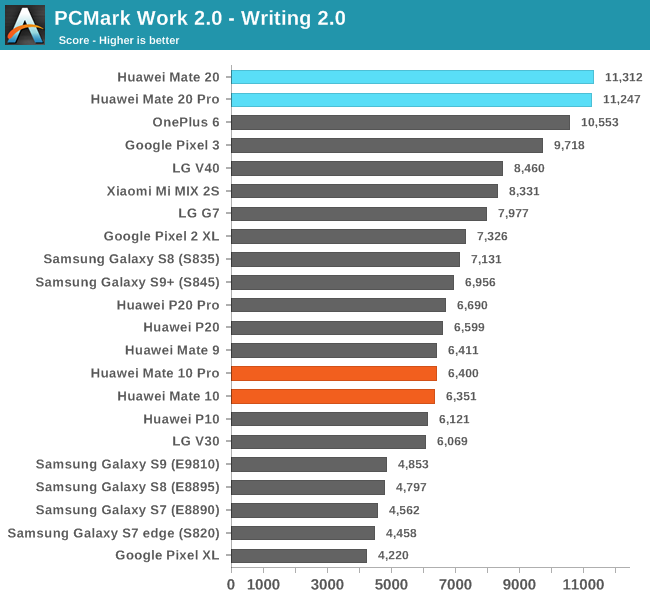 The PCMark Writing test is among one of the most representative ones in terms of putting a number on overall device snappiness and speed. Here the Mate 20’s again take the lead, however the delta to the second best devices here isn’t quite as big as in the web browsing test. The OnePlus 6 and Pixel 3 both seem to have an advantage over other devices due to the fact that they’re running Android 9/P along with an up-to-date Qualcomm scheduler. 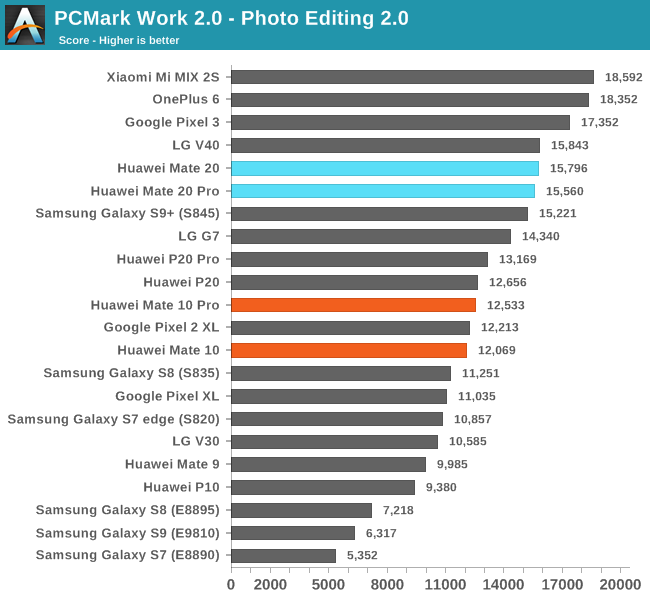 The photo editing test consists of small workload bursts – applying photo filters via RenderScript APIs. Here both performance and again performance responsiveness are key. The Mate 20’s again do very well, however they don’t quite match the performance of some of the best Snapdragon 845 devices, featuring the more up to date Qualcomm schedulers. 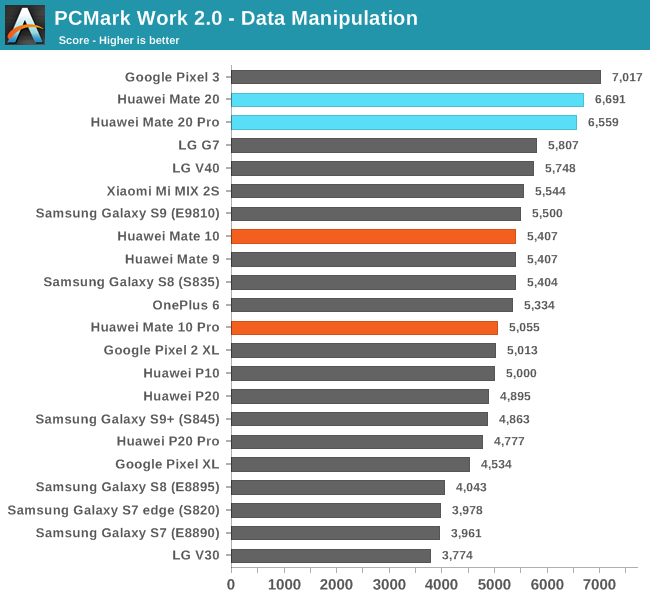 The Data Manipulation test is heavily influenced by single-threaded performance. Here although they don’t seem to quite match the Pixel 3 in this particular test, the Mate 20’s are still ahead of most other Android phones. 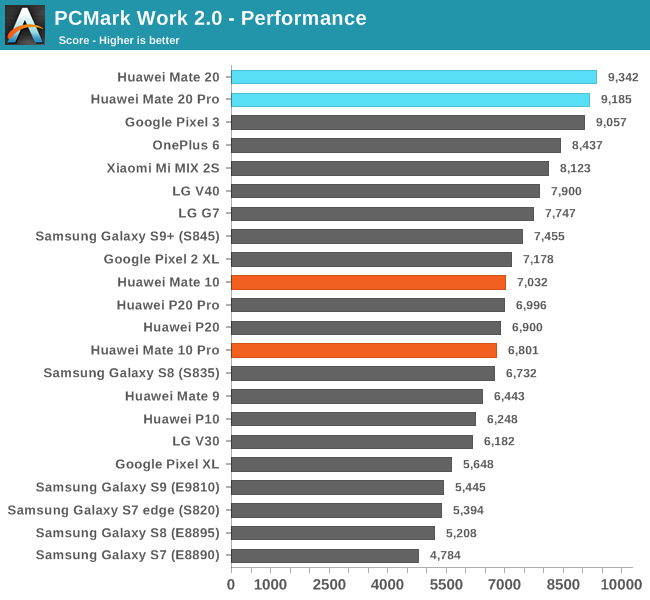 In the overall PCMark performance test, the Mate 20’s just land ahead of the Pixel 3 and OnePlus 6. 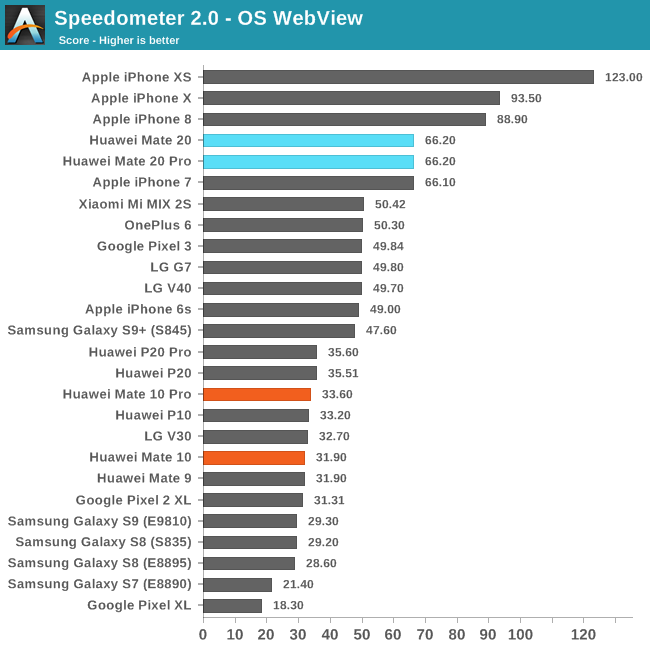 In the WebView tests where we first use Speedometer, a JS framework test, we see the Mate 20’s again take a good leap ahead of the second-best Android platforms based on the Snapdragon 845. Against the previous generation Kirin 970 phones, Huawei was again essentially able to double the performance. It’s still not enough to catch up to Apple, but at least we’re on par with the A10, a result that was also largely represented by the SPEC2006 results. 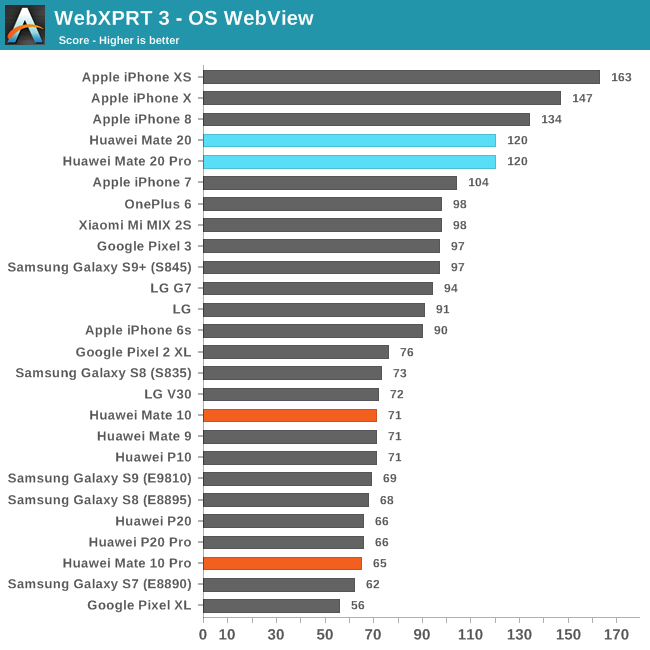 WebXPRT is a tad less microarchitecturally demanding than Speedometer, and here performance largely seems to scale with simple overall raw CPU execution power. Again we see a similar positioning as in Speedometer, with the Mate 20’s taking the lead among Android devices.

My experience with the devices pretty much matches the system benchmarks – the Mate 20’s are among the fastest devices on the market. Where the Kirin 980’s performance shines is in more complex and heavier workloads, such as loading a webpage or opening content of more heavy apps.

In terms of overall feel and responsiveness, I do feel that the Mate 20’s maybe weren’t quite as fast as the Pixel 3 or OnePlus 6. Here these phones do feel a bit quicker in opening some applications or new activities. It’s possible that Huawei maybe is lacking some OS framework related boosters that these phones might be using. I do plan to try to reintroduce empirical and controlled app loading time testing in the future, so this might be a topic we’ll revisit soon enough.