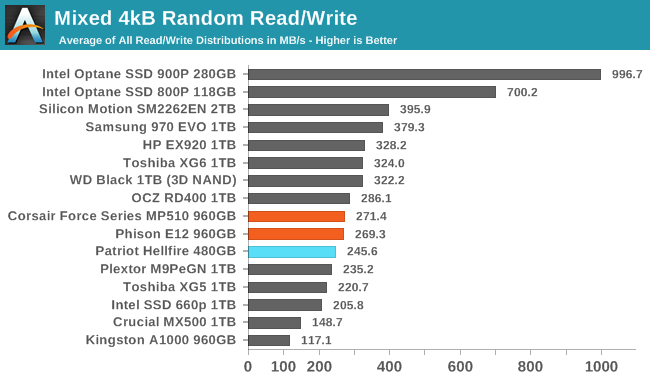 The Corsair Force MP510 demonstrated above average random read performance and top tier random writes, but the mixed workload results are average at best. The WD Black averages about 18% higher performance with the same NAND, and the Samsung 970 EVO is about 40% faster.

As with performance, the power efficiency score from the MP510 is acceptable but nothing special compared to the Toshiba XG6 and WD Black.

The unimpressive overall score from the MP510 on the mixed random I/O test seems to primarily stem from how it behaves during the more write-heavy half of the test. As the proportion of writes grows, the performance of the  MP510 increases relatively slowly until the very end when performance spikes on the 100% cachable pure random write phase of the test. 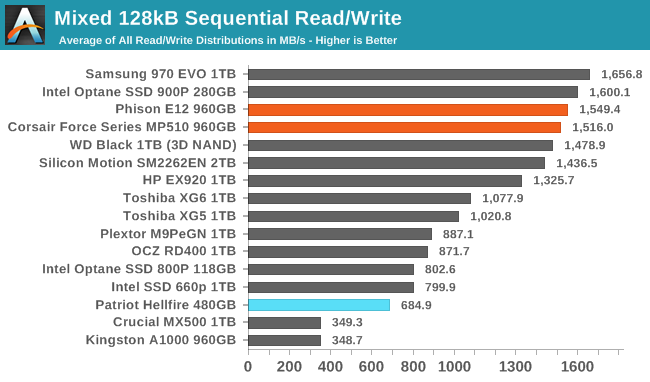 The Corsair Force MP510 provides excellent performance on our mixed sequential I/O test, but for once appears to be slightly slower than the Phison E12 engineering sample we tested earlier this year.

The MP510 turns in an extremely good power efficiency score for the mixed sequential I/O test: only about 4% behind the class-leading WD Black, and 50% better than the HP EX920.

The performance curve of the Corsair Force MP510 on the mixed sequential I/O test looks rather unusual, with performance jumping around a bit and at its best during the more write-heavy half of the test. Most drives show a more typical bathtub curve with the best performance at either end of the test, but the WD Black's behavior does show similarities to the MP510.