Starting with the ATX sized model of a trio of Gaming Edge MSI MPG (performance) range boards, the MSI MPG Z390 Gaming Edge AC as the name suggests means it has built-in wireless networking support; this is provided by a standard Intel 9462 802.11ac Wi-Fi adapter which is compliant with the latest Bluetooth 5 connectivity. The overall design and layout looks very similar to the MPG Z390 Gaming Pro Carbon AC with near identical PCBs, but with primarily visual differences such as heatsinks. 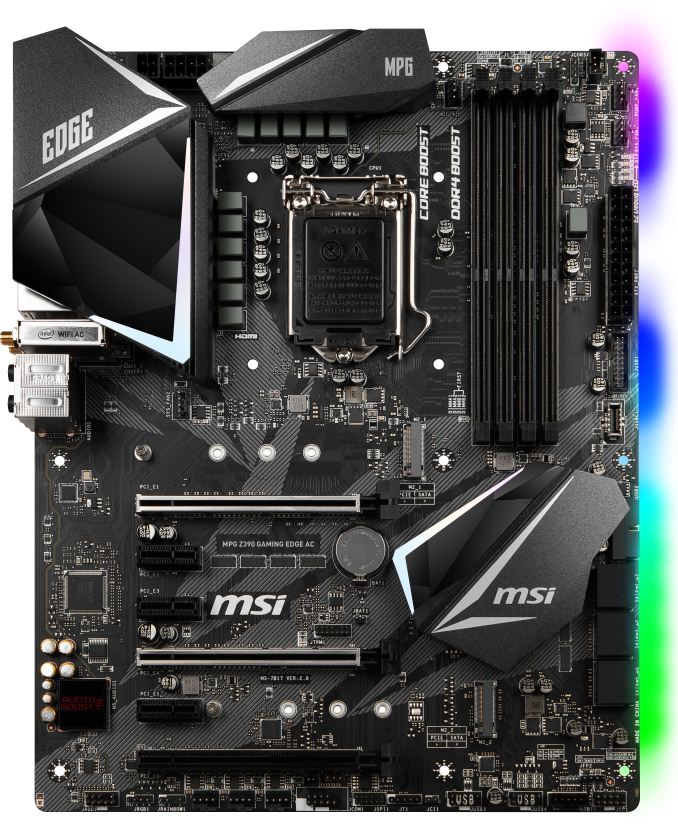 The MPG Z390 Gaming Edge AC has three full-length PCIe 3.0 slots with the top two slots being treated to MSI's Steel Slot armor, while the bottom slot is bare. The slots operate at x16, x8 and x4 respectively meaning three-way Crossfire and two-way SLI multi-graphics card setups are supported. For the memory, the board has four RAM slots with support for DDR4-4400 with a total capacity for up to 64 GB. The storage is facilitated by a pair of M.2 PCIe 3.0 x4/SATA slots and six SATA ports capable of supporting RAID 0, 1, 5 and 10 arrays.

On the rear panel, MSI has included two USB 3.1 Gen2 ports which are comprised of a Type-A and Type-C port, two USB 3.0 Type-A ports and two USB 2.0 ports. There is expansion through internal headers to extend USB support to a further four USB 3.0, four USB 2.0 and an additional single USB 3.1 Gen2 Type-C port. The five 3.5 mm gold plated audio jacks and optical S/PDIF output are handled by a Realtek ALC1220 HD audio codec, whereas the single LAN port is powered by an Intel I219V Gigabit controller. Unlike the MEG series, the MPG models do offer video outputs with the MPG Z390 Gaming Edge AC offering a pairing consisting of an HDMI and DisplayPort.

The primary target market for the MPG Z390 Gaming Edge AC is the mid-range and with a suggested launch price of $190, it represents a more conservative approach with fewer features overall, but keeping the bulk of the premium controllers featured on the more expensive MPG Z390 Gaming Pro Carbon AC such as the Realtek ALC1220 audio codec.