The GIGABYTE Z390 Aorus Elite is a little more 'basic' in terms of aesthetics than the Z390 Aorus Master and although the board has a similar rear panel cover and features integrated RGB LED lighting, the Z390 Aorus Elite belongs to the low to mid-range of Z390 options available. As per GIGABYTE's new naming scheme, one thing we do know is that the Z390 Aorus Elite replaces the Z370 Aorus Gaming 3 in the low-end Z390 entry segment. Official memory support out of the box consists of DDR4-4133 with up to 64 GB supported across four available RAM slots. 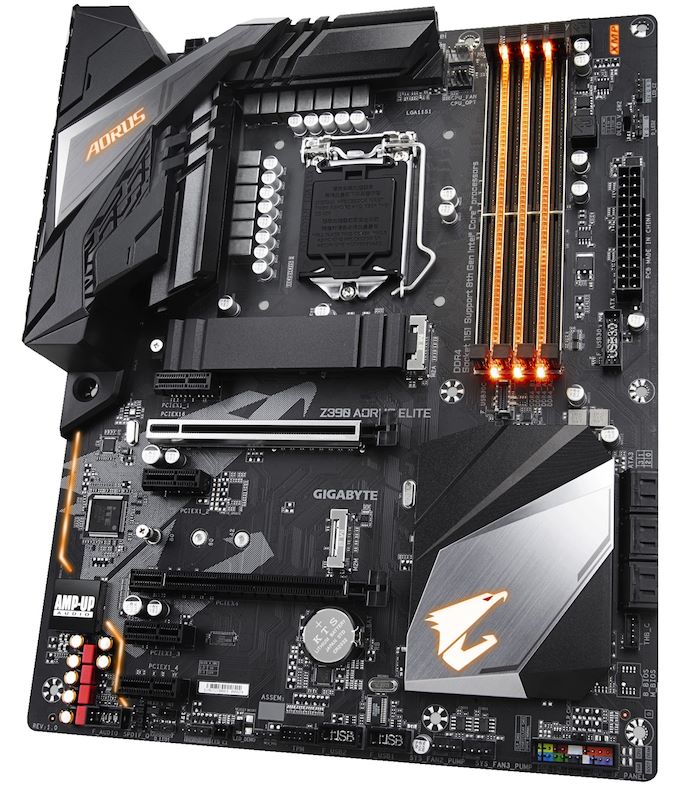 On the rear panel, GIGABYTE has included two USB 3.1 Gen2 Type-A, four USB 3.0 Type-A and four USB 2.0 ports. Also featured are a single HDMI video output and a single LAN port controlled by an Intel I219V Gigabit networking chip. The onboard audio is directed by a Realtek ALC1220-VB HD audio codec and offers a total of five 3.5mm audio jacks and a single S/PDIF optical output.

Like the majority of the boards in GIGABYTEs Z390 product stack, the Z390 Aorus Elite is advertised as having a 13-phase power delivery in a 12+1 configuration. The board has two full-length PCIe slots with the top slot with support for two-way CrossFire configurations. In addition to the full-length slots is a total of three PCIe 3.0 x1 slots. In terms of storage, the Z390 Aorus Elite has a total of two M.2 slots with the top slot getting treated to an M.2 heat shield. As with most Z390 motherboards, there is a total of six SATA ports which allows for RAID 0, 1, 5 and 10 arrays to be utilized.

The Z390 Aorus Elite is targeted more towards gamers on a budget with an MSRP of $180 and as previously mentioned, replaces the Z370 Aorus Gaming 3 in GIGABYTEs previous product stack making this the cheapest of their Z390 gaming themed ATX sized motherboards. There is no scope for SLI due to bandwidth restrictions on the second full-length PCIe 3.0 x4 slot (SLI requires x8 minimum), but users planning on running an AMD based graphics card can effectively double if they so wish.