Outside of the gaming-centric offerings on the new Z390 chipset, the ASUS WS Z390 Pro is one of the most comprehensive with a massive set of specifications and feature-rich list that makes this a very attractive high-end option. Stylistically the board has a subtle black and silver theme throughout with a glossy silver chipset heatsink. The WS stands for workstation and is designed specifically for professional users looking to build a high powered multi-core system with one of the higher end Intel Core i9- 9900K processors. The biggest feature of the WS Z390 Pro is in its ability to run up to four-way SLI thanks to four Safe Slot protected full-length PCIe 3.0 slots. The top two operate with a bandwidth of x16/x16 with two cards installed, x16/x8/x8 with three cards and x8/x8/x8/x8 with four graphics cards. Although the WS Z390 Pro has no PCIe 3.0 x1 slots to speak of, it has a single PCIe 3.0 x4 slot located between the full-length slots. 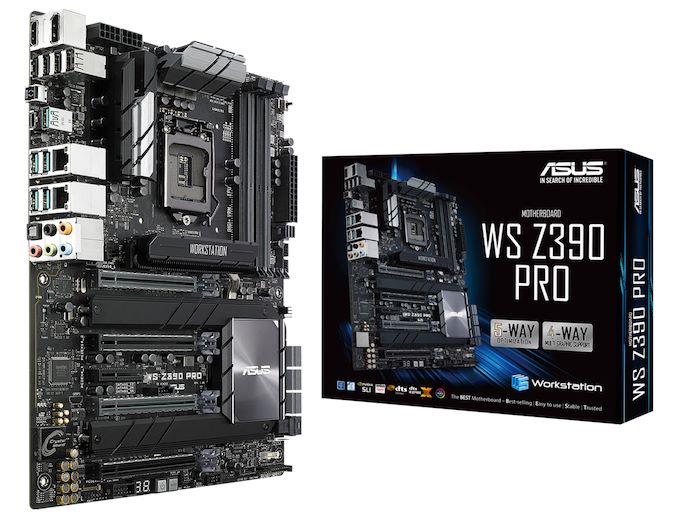 The storage options of the WS Z390 Pro includes three M.2 PCIe 3.0 slots with two of them having support for SATA drives too; also present is six SATA ports with support for RAID 0, 1, 5 and 10 arrays. The WS Z390 Pro also features two U.2 ports. The board is equipped with four RAM slots with support for DDR4-4266 and a total capacity of up to 64 GB.  A total of six 4-pin PWM enabled headers are located on the board and ASUS has included two 8-pin 12 V ATX CPU power inputs for overclockers to make use of.

The WS Z390 Pro focuses less on gaming orientated features and more on professional elements with a Realtek S1200A HD audio codec powered the five 3.5 mm audio jacks and S/PDIF optical output. The rear panel also features dual Intel Gigabit LAN with an Intel I21LM and Intel I210AT Gigabit NIC. A total of ten USB ports are located on the rear panel which is split into five USB 3.1 Gen2 Type-A, one USB 3.1 Gen2 Type-C and four USB 2.0 ports. At the far left-hand side is a DisplayPort and HDMI 2.0b pair of video outputs and the WS Z390 Pro has a handily located BIOS Flashback button on the rear panel too.

As expected the WS Z390 Pro will most certainly be one of the most expensive Z390 ASUS boards at launch, with the pricing currently unknown and looks set to offer prosumers a four-way SLI capable desktop offering from one of the biggest brands in the industry. The USB 3.1 Gen2 integration in the Z390 chipset has been made to great use and the WS Z390 Pro offers the one of the most comprehensively implemented feature-sets on the entirety of the chipset. It's slightly disappointing that there's no 5 G or 10 G  Aquantia LAN to be seen and this would have been a much-welcomed feature for workstation users to sink their teeth into.