We were just as shocked as you all to see live NV45 demonstrations at Computex, so we made it top priority to get some more information on NV45.

First of all, it seems that at least some of the samples of NV45 that NVIDIA handed out are running at 350MHz with 1GHz GDDR3 memory, which is slower than the current NV40 GPU. Granted we are not dealing with final hardware, but the fact that NVIDIA is running these parts at a lower clock is interesting.

NVIDIA did a similar thing with NV35, they ran it initially at much lower clock speeds than NV30 to show that even at lower clock speeds it could outperform NV30. We can't help but wonder if NVIDIA has done any internal tuning on NV45 that would make performance at the same clock, go up. Unfortunately, architectural details are sparse at best, but we're working hard to get them if we can.

The next topic of discussion is PCI Express. The NV45 card we already pictured is clearly a PCI Express x16 card, but we could not find an external bridge chip, meaning that NVIDIA had produced a native PCI Express NV45. We were incorrect in that assumption, which we revealed by taking the heatsink off of NV45: 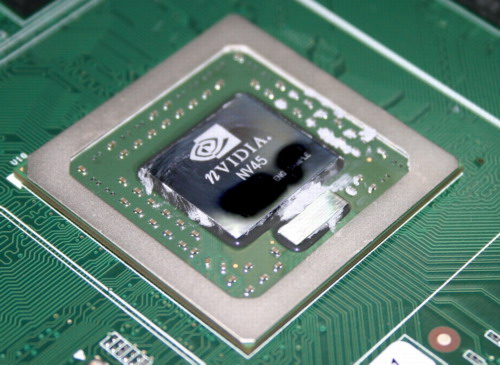 Underneath the heatsink you'll see the NV45 GPU, as well as a separate die on the same package.

The second, smaller die is NVIDIA's High Speed Interconnect (HSI) which is an AGP-to-PCI Express bridge, meaning that NV45 is still an AGP part. Granted this isn't a negative thing, but we're just trying to set the record straight - NVIDIA's AGP/PCI Express plans have not changed. 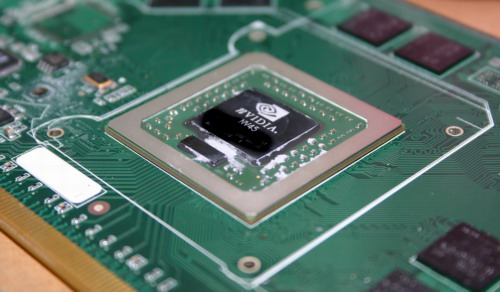 Note: we've had to blur or cut out various markings on the card itself to protect our sources, nothing else has been modified in these pictures