The Minor Issue of Overzealous Marketing

As mentioned earlier in the piece, the most common numbers from Huawei and Honor about the new technology follow the same pattern: GPU Turbo is going to offer up to 60% extra performance, and 30% better power consumption. Since launch, out of all the marketing materials we have seen, there is exactly one instance where either company expands on these figures. This is in the footnotes of Honor Play’s English global product page, explaining the context of the 60%/30% numbers: 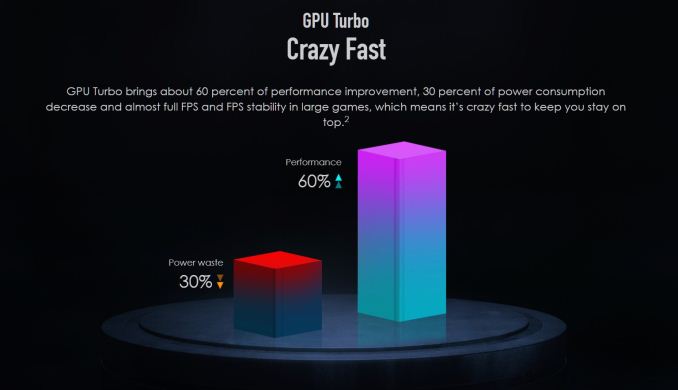 Here is what that tiny bullet point says:

*2 The GPU Turbo is a graphics processing technology that is based on Kirin chips and incorporates mutualistic software and hardware interaction. And it supports some particular games.
Results are based on comparison with the previous generation chip, the Kirin 960.

This is a big red flag. Normally when comparing a new technology, the performance difference should be quoted in an off/on state. So it shouldn’t be too complicated to see as to the fact that using the Kirin 960 as the base result is a pretty massive issue. It means that the marketing materials are mixing up its claims – values that are explicitly being attributed to GPU Turbo, a software technology, are mixed with silicon improvements between two generations of chipsets.

For our readers unfamiliar with the generational improvements of the new Kirin 970 chipset, I recommend referring back to our in-depth article review of chipset released back in January. In terms of advancements, the Kirin 970 brings a new Mali G72MP12 GPU running at 747MHz, manufactured on a new TSMC 10nm process. This represented quite an improvement to the 16nm manufactured Kirin 960 which featured a Mali G71MP8 at up to 1037MHz.

Furthermore, the Kirin 960’s GPU performance and efficiency was extremely problematic, showcasing some of the worst behavior we’ve ever seen in any smartphone ever released. We’re not going to go back as to why this happened, but it was a competitive blow to the Kirin 960.

Now the Kirin 970 improved from these low figures, as we’ve shown in our reviews. But the 60% performance improvements and 30% power improvement mentioned for GPU Turbo, while in isolation might sound impressive, aren't nearly as impressive once we know what they're based on. By being relative to the badly performing Kirin 960, it completely changes the meaning. Users that enable GPU Turbo on their devices will not experience a 60%/30% difference in performance.

This is also in the face of Huawei’s own data presented throughout the lifetime of GPU Turbo. Quoting 60%/30% makes for impressive headlines (regardless of how honest they are), however even Huawei’s own analysis shows that 60%/30% are wildly optimistic: 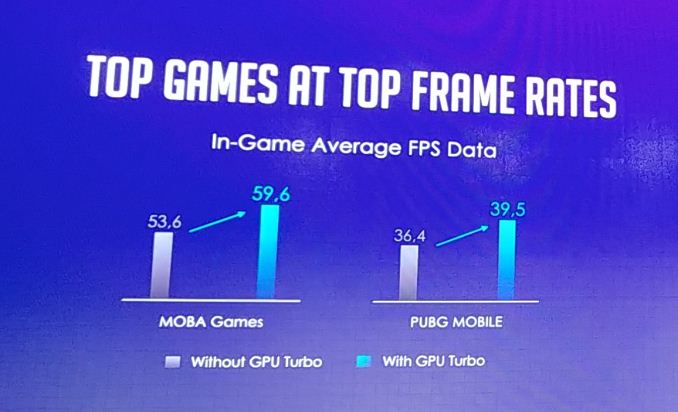 Ultimately Huawei presented the 60%/30% figures as a differential between GPU Turbo On/Off. If anyone was expecting that on their device, then they would be sorely disappointed. The fact that the companies obfuscated the crucial comparison point of the Kirin 960 is almost unreal in that respect.

Also on that image above, we have to criticize quite heavily on the fact that those bar charts are misrepresenting all the gains: the 3 FPS gain in PUBG is shown as a 25% gain. Companies feel the need to misrepresent the true growth in values like this because it makes for a more impressive graph, rather than adhere to the standard of starting graphs at zero.

Why Using The Kirin 960 Is An Issue: Starting With A Low Bar

Going back to our GPU power efficiency tables measured in GFXBench Manhattan 3.1 and T-Rex, we put the two chipsets back into context:

So while the Kirin 970 is an advancement and improvement over the 960 – in the context of the competition, it still has trouble holding up with this generation’s Exynos and Snapdragon.

The key point I’m trying to make here in the context of GPU Turbo claims, is that the 60%/30% figures are very much unrealistic and extremely misleading to users. If Huawei and Honor are not clear about the baseline comparisons, the companies' own numbers can never be trusted in future announcements again.

How Much Does GPU Turbo Actually Provide?

On Friday Huawei CEO Richard Yu announced the new Kirin 980, and some of the presentation slides addressed the new mechanism, showcasing a more concrete figure of the GPU Turbo effects on the newly released chipset: 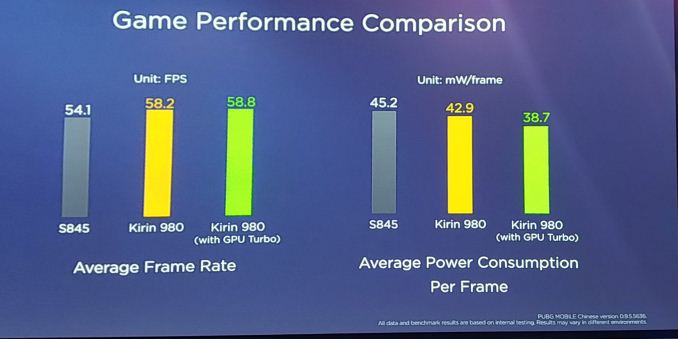