Exact per-core turbo timings for the new processors will be determined by AMD’s voltage-frequency scaling functionality through Precision Boost 2. This feature, which we covered extensively in our Ryzen 7 2700X review, relies on available power and current to determine frequency, rather than a discrete look-up-table for voltage and frequency based on loading. Depending on the system default capabilities, the frequency and voltage will dynamically shift in order to use more of the power budget available at any point in the processor loading. 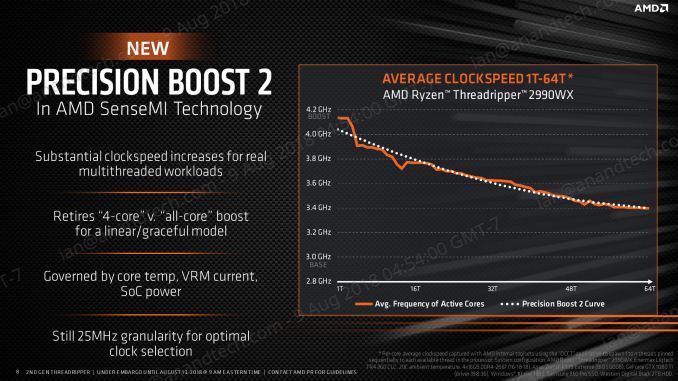 The idea is that the processor can use more of the power budget available to it than a fixed look up table that has to be consistent between all SKUs that are stamped with that number.

Precision Boost 2 also works in conjunction with XFR2 (eXtreme Frequency Range) which reacts to additional thermal headroom. If there is additional thermal budget, driven by a top-line cooler, then the processor is enabled to use more power up to the thermal limit and get additional frequency. AMD claims that a good cooler in a low ambient situation can compute >10% better in selected tests as a result of XFR2.

Ultimately this makes testing Threadripper 2 somewhat difficult. With a turbo table, performance is fixed between the different performance characteristics of each bit of silicon, making power the only differentiator. With PB2 and XF2, no two processors will perform the same. AMD has also hit a bit of a snag with these features, choosing to launch Threadripper 2 during the middle of a heatwave in Europe. Europe is famed for its lack of air conditioning everywhere, and when the ambient temperature is going above 30ºC, this will limit additional performance gains. It means that a review from a Nordic publication might see better results than one from the tropics, quite substantially.

Luckily for us we tested most of our benchmarks while in an air conditioned hotel thanks to Intel’s Data-Centric Innovation Summit which was the week before launch.

The new processors also support a feature called Precision Boost Overdrive, which looks at three key areas for power, thermal design current, and electrical design current. If any of these three areas has additional headroom, then the system will attempt to raise both the frequency and the voltage for increased performance. PBO is a mix of ‘standard’ overclocking, giving an all core boost, but gives a single core frequency uplift along with the support to still keep Precision Boost trying to raise frequency in middle-sized workloads, which is typically lost with a standard overclock. PBO also allows for idle power saving with a standard performance. PBO is enabled through Ryzen Master.

By extending these limits, PBO gives rise for PB2 to have more headroom, letting PB2 push the system harder and further. PBO is quoted by AMD as supplying up to +16% performance beyond the standard.

AMD also clarifies that PBO is pushing the processor beyond the rated specifications and is an overclock: and thus any damage incurred will not be protected by warranty

Also available with the new Ryzen Threadripper 2 processors is StoreMI, AMD’s solution to caching by offering configurable tiered storage for users that want to mix DRAM, SSD, and HDD storage into a single unified platform. The software implementation dynamically adjusts data between up to 2GB of DRAM, up to 256 GB of SSD (NVMe or SATA), and a spinning hard drive to afford the best reading and writing experience when there isn’t enough fast storage. 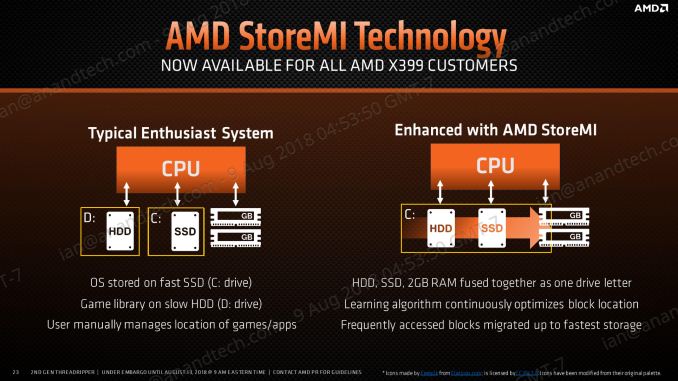 AMD initially offered this software as a $20 add-on to the Ryzen APU platform, then it became free (up to a 256GB SSD) for the Ryzen 2000-series processors. That offer now extends to Threadripper. AMD’s best case scenario is citing a 90% improvement in loading times.