MSI’s Pro series of motherboards are designed with professionals in mind, without sacrificing in performance, quality and offers a blend of modest and classic aesthetics. MSI has announced three Pro series boards for the AMD B450 chipset launch, the ATX sized B450-A Pro and a pair of microATX options, the B450M Pro-M2 and B450M Pro-VDH.

Starting with the MSI B450-A Pro motherboard, the design is pretty simplistic with plenty of PCIe connectivity available. MSI markets this particular model as being optimized and suitable for cryptocurrency mining and has a full-length PCIe 3.0 x16 slot, a full-length PCIe 2.0 x4 slot and a total of four PCIe 2.0 x1 slots. Up to DDR4-3466 memory is supported with a supported maximum of up to 64 GB can be installed across the four RAM slots. Both the use of non-ECC and ECC memory is permitted, although installed ECC memory will operate in non-ECC mode. 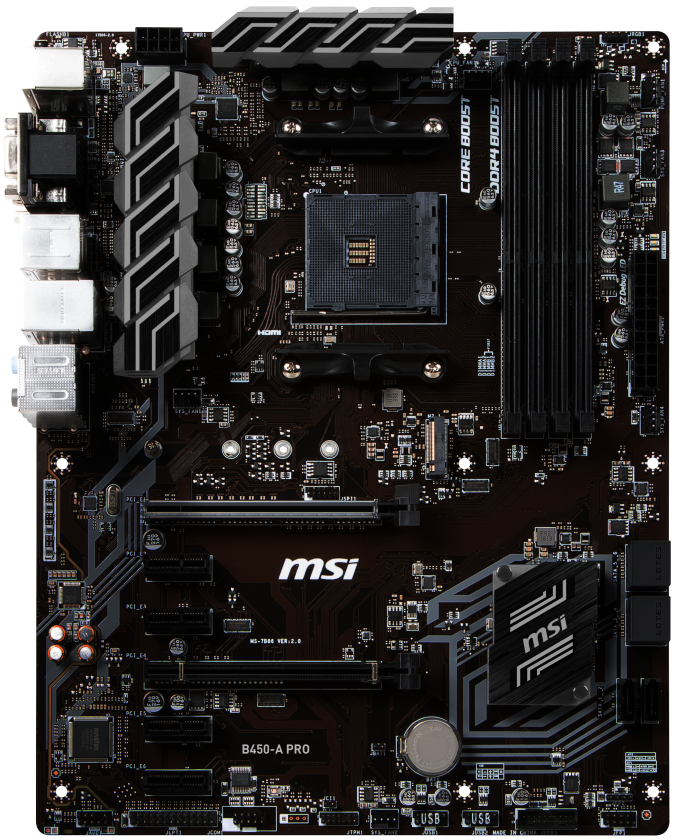 Stylistically, the B450-A Pro has a black PCB with dark grey metallic heatsinks across the power delivery and chipset. The board looks to be running a 6-phase power delivery running in a 4+2 configuration. A single 8-pin ATX 12 V CPU input and 24-pin ATX motherboard input are there to provide power to the board.

On the rear panel the B450-A Pro has two USB 3.1 10 Gbps Type-A ports, two USB 3.1 5 Gbps Type-A ports and two USB 2.0 ports. Also featured is a BIOS Flashback+ button, with a PS/2 keyboard and mouse port. Natively supporting the Ryzen APUs, the board makes use of a single HDMI 1.4 port, a DisplayPort and a legacy VGA port. The RJ45 LAN port is powered by a Realtek 8111H Gigabit controller and the six 3.5mm audio jacks take orders from the Realtek ALC892 audio codec.

With MSI focusing on a mixture of subtle aesthetics, good quality componentry and with cryptocurrency mining support, there isn’t a lot of bells and whistles when compared to the Gaming Series models, but what is on offer is more than enough for professional users. The MSI B450-A Pro is expected retail for $89.99 which makes this one of the most cost-effective full-sized ATX models without Gaming branding and fancy gaming themed software factored in.