The MSI B450I Gaming Plus AC is an Mini-ITX motherboard from MSI’s Gaming range and just like the bigger sized ATX B450 Gaming Plus it shares a similar feature set in terms of controllers and available connections. The main differences aside from the form factor come from the inclusion of an Intel Dual-Band Wireless-AC 3168 Wi-Fi module. 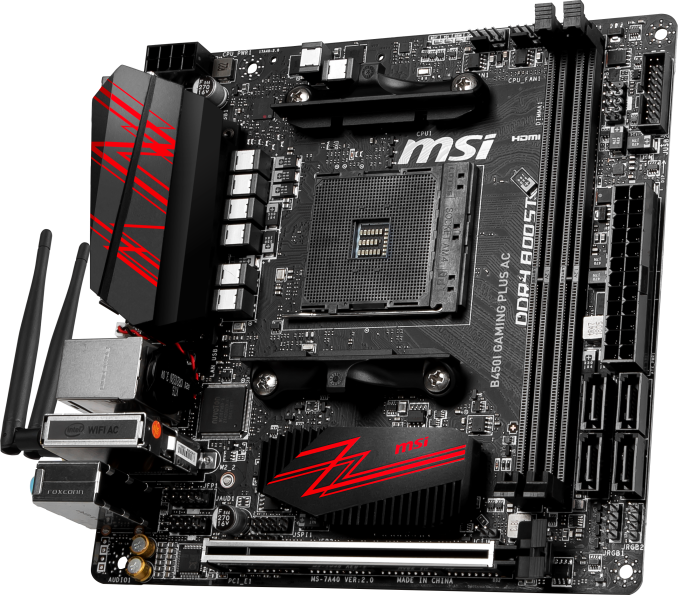 The limitation of Mini-ITX means the B450I Gaming Plus AC has a single full-length PCIe 3.0 x16 slot, with storage options provided by the B450 chipset via four SATA ports; all of the SATA ports feature straight angled connectors which are located just below the 24-pin ATX motherboard power input. Also included is a single M.2 slot capable of supporting PCIe 3.0 x4 or SATA drive up to a size of M.2 2280 (22 x 80 mm). Providing power to the CPU is an 8-pin ATX 12 V input with the B450I Gaming Plus AC seemingly sporting an 8-phase power delivery running in a 6+2 configuration.

Aesthetically speaking, the B450I Gaming Plus AC has an all-black PCB with heatsinks which follows the red and black MSI Gaming theme; the red pattern on both the black power delivery and chipset heatsink resembles a lightning bolt. Looking at memory support, the board has two slots capable of supporting DDR4-3466 with a maximum of 32 GB of memory allowed. The MSI B450I Gaming Plus AC has support for both non-ECC and ECC DDR4 memory, although installed ECC memory will operate in non-ECC mode.

On the rear panel, the B450I Gaming Plus AC has a total of six USB Type-A ports split between four USB 3.1 5 Gbps and two USB 2.0 ports; this board omits any USB 3.1 10 Gbps ports at all and lacks any Type-C connectivity. A single PS/2 keyboard and mouse combo port is present, with the Intel 3168 802.11ac Wi-Fi adapter commanding some space for the two included antennae’s to be installed. Finishing off the rear panel is a pairing of video outputs, an HDMI and DisplayPort, with the three 3.5mm audio jacks being provided by the budget-friendly Realtek ALC887 audio codec and the single LAN port being controlled by the Realtek 8111H Gigabit LAN controller.

MSI has clearly gone the more wallet-friendly approach with the B450I Gaming Plus AC with a host of relatively affordable controllers and offering a smaller form factor Mini-ITX gaming themed alternative. Users looking to customize the look of their system will be pleased to know that MSI has included two 5050 RGB LED strip headers but does lack any integrated RGB capabilities under the heatsinks. The launch price of $119.99 is set to make the ITX AM4 market competitive.