The MSI B450 Gaming Pro Carbon AC sits as MSI’s premier and flagship B450 chipset motherboard and has a strong focus on gaming but moves away from the conventional MSI Gaming red and black theme. The B450 Gaming Pro Carbon AC also uses a variety of premium controllers and chips including the Realtek ALC1220 audio codec, an Intel 9260 dual-band 802.11ac 2T2R Wi-Fi adapter and an Intel I211-AT Gigabit LAN networking chip. 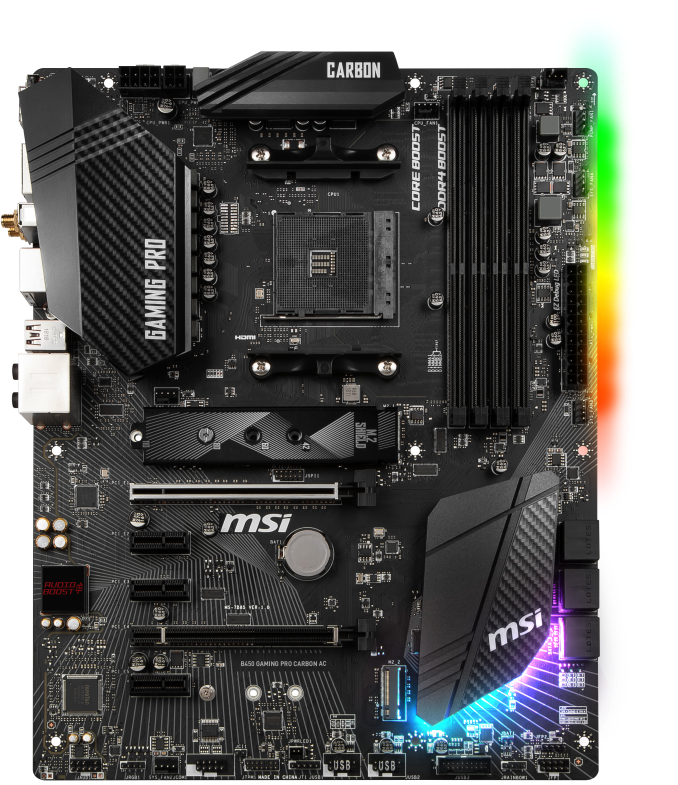 As mentioned, the B450 Gaming Pro Carbon AC moves away from the traditional gaming theme usually seen from MSI, and instead the carbon namesake features an all-black PCB with the bottom left quadrant having a grey lined pattern rising towards the heatsinks and passed the PCIe slots. Both the power delivery and chipset heatsink have a definitive carbon themed styling which blends in with the rest of the board to create a stylish look. The board also has two dedicated RGB zones with the first emanating from the right and side behind the 24-pin ATX power connector, with the second coming from the chipset heatsink. To expand on this, MSI has included a total of three RGB headers with two having support for 5050 RGB LED strips with a maximum power of 12 V, and the last supporting addressable RGB strips up to a power of 5 V.

The board conforms to the standard ATX form factor and has a full-length PCIe 3.0 x16 slot, a full-length PCIe 2.0 x4 slot and three PCIe 2.0 1x slots. The B450 Gaming Pro Carbon AC has a total of four memory slots supporting up to DDR4-3466 with a total of 64 GB system memory supported. A total of six SATA right angled ports and two M.2 slots with one offering PCIe 3.0 x4/SATA support, and the other allowing for just PCIe 2.0 x4 supported drives.

On the rear panel, the B450 Gaming Pro Carbon AC has one USB 3.1 10 Gbps Type-C, one USB 3.1 10 Gbps Type-A, two USB 3.1 5 Gbps Type-A and two USB 2.0 ports. Delivering audio through the six 3.5mm audio jacks and S/PDIF optical output is the Realtek ALC1220 audio codec, with the single LAN port taking direction from an Intel I211-AT Gigabit chip and the Wi-Fi featuring Wave 2 2T2R capability due to the Intel 9260 Wi-Fi module. Finishing off the rear panel is a clear CMOS switch and a P/S2 keyboard and mouse combo port.

While none of the pricing on MSI B450 models has been announced prior to launch, the B450 Gaming Pro Carbon AC is expected to retail for around $149.99.